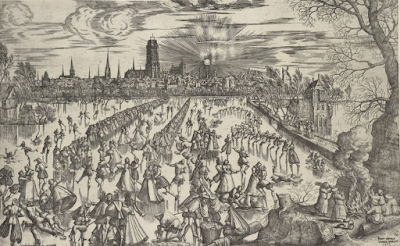 If a skating history aficionado from the twenty third century looked back on the sport today, they might gain a sense of the sport through watching YouTube videos and checking out skater's Instagram feeds. To learn about skating in the nineteenth century, they might read old newspaper articles, books and look at ambrotype photographs and magic lantern slides.

If one wanted to delve even further back, one of the few clues available about the sport's existence would be the art of the period. While beautiful winter scenes depicted in paintings and woodcuts from the seventeenth century clearly depict skating, several of their sixteenth century counterparts are far more ambiguous. 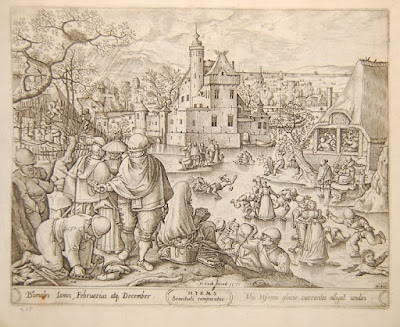 Photo copyright The Trustees of the British Museum. Used for educational purposes under license permissions.

Flemish painter and etcher Hieronymous Cock (now there's a name!) created a cycle of "The Four Seasons" in 1570, after the work of Hans Bol. An engraving of his fourth plate, "Winter", was by printmaker Pieter van der Heyden. No stranger to winter scenes, van der Heyden also made engravings from other artists of the period who featured skating in their work - artists like Pieter Bruegel the Elder and Hieronymus Bosch.

"Winter" is a fascinating piece of art. In the fore of the scene, a man can be seen tying an old-style pair of skates to his shoes. In the center, you can see skaters skating (and falling) and to the right, a drowning man who has fallen through the ice being rescued by a man with a long pole. Behind the skaters is a tavern full of hard-drinking locals. Were they having a pint before they skated or after? Perhaps that's one of those 'chicken or the egg' questions. 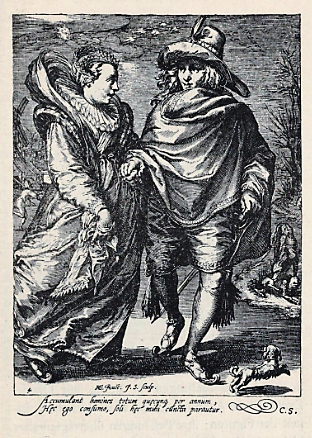 Engraved by his student Jan Saenredam circa 1594, "De Winter" was one of four cycles of winter drawings depicting The Four Seasons by Hendrick Goltzius. German born Goltzius was one of the most acclaimed engravers of the early Baroque period in Holland despite the fact he drew with his right hand, which was malformed after he was burned by a fire in his infancy.

In the scene, a young couple dressed in the fashions of the era skates hand in hand on steel blades. They are joined on the ice by a wee pup. The inscription in the lower corner roughly translates to, "Young people saluting, in winter... the old ones." Saenredam's engraving of Goltzius' "De Winter" was obtained by The British Museum in 1840. 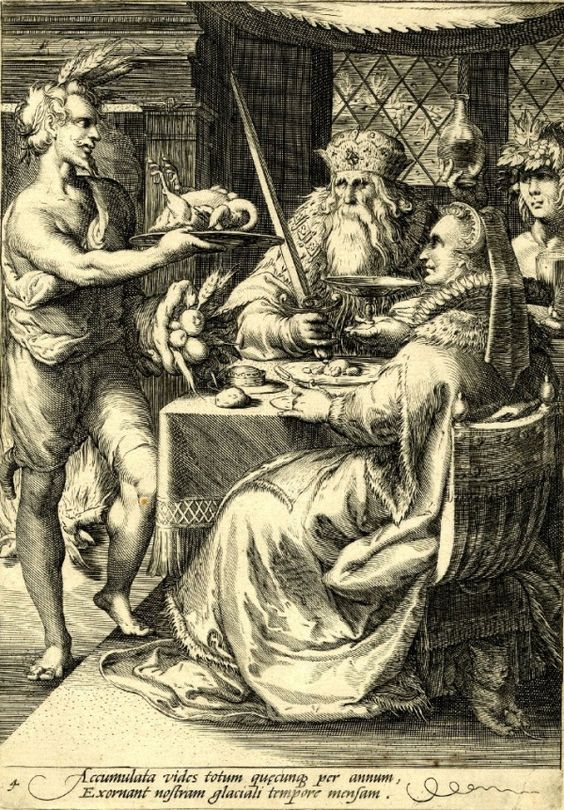 Interestingly, another of Goltzius' winter drawings from this cycle also depicted skaters. Christiane Lauterbach's journal article "Masked Allegory: The Cycle of the Four Seasons by Hendrick Goltzius, 1594-95" noted, "In the cold months, work comes to a standstill. 'Winter' shows us an old couple seated at the table in a living room warmed by a log fire. A roast fowl is being served to them, and through the window skaters can be seen in a wintry landscape." 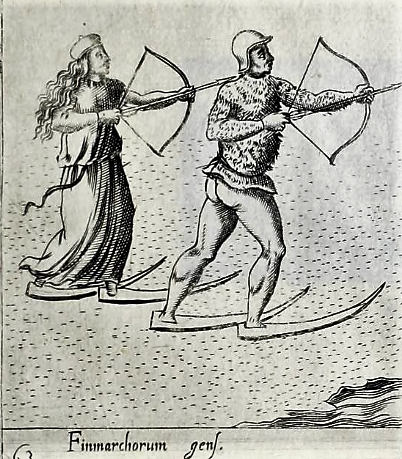 An interesting piece is this plate from Italian typesetter and editor Pietro Bertelli's 1594 two volume "Diversarum nationum habitus...". Although at first glance the man and woman in the pictures appear to be wearing snow-skis to hunt, the fact they don't have poles to propel themselves along is certainly curious. The inscription 'Finmarchorum' likely references the Norwegian region of Finmarchia, and the artist's design of the footwear on the man and woman's feet was likely conceived by an Italian who had never been to Norway, let alone seen skating. Even more curious is a folio in Polish writer Aleksander Gwagnin's 1578 book "Sarmatiae Europeae descriptio, quae Regnum Poloniae". The book itself is controversial, as Gwagnin's assistant Maciej Stryjkowski claimed that Gwagnin stole the manuscript and claimed it as his own. The image in question depicts a duke or knight who appears to be wearing what looks like a curlicued toe skate on his foot. Many of the characters portrayed in the "Sarmatiae Europeae descriptio, quae Regnum Poloniae" were based on Lithuanian nobility, so this image suggests that there may have been skating in that region of Europe during that era.

Skate Guard is a blog dedicated to preserving the rich, colourful and fascinating history of figure skating and archives hundreds of compelling features and interviews in a searchable format for readers worldwide. Though there never has been nor will there be a charge for access to these resources, you taking the time to 'like' on the blog's Facebook page at http://www.facebook.com/SkateGuard would be so very much appreciated. Already 'liking'? Consider sharing this feature for others via social media. It would make all the difference in the blog reaching a wider audience. Have a question or comment regarding anything you have read here or have a suggestion for a topic related to figure skating history you would like to see covered? I'd love to hear from you! Learn the many ways you can reach out at http://skateguard1.blogspot.ca/p/contact.html.f
Posted by Skate Guard Blog at March 10, 2020
Email ThisBlogThis!Share to TwitterShare to FacebookShare to Pinterest
Newer Post Older Post Home