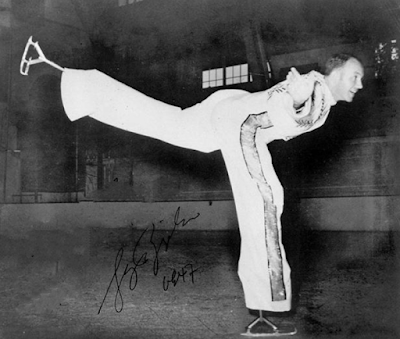 "It is nothing for von Birgelen to jump over the top of a seven-passenger limousine before breakfast, or at least during a skating show." - Bradley Fisk, "Buffalo Courier-Express", March 16, 1941

The son of Elizabeth (Hupe) and Theodore von Birgelen, Georg von Birgelen was born March 3, 1915 in Zürich, Switzerland. As a young man, he excelled in a variety of sports including soccer, football and running. When he first tried on a pair of skates at the age of sixteen, one came loose during a turn and he fell and broke his arm. Undaunted by this mishap, he bought "a special pair made of Swedish steel" and was showing off what he'd taught himself on the ice in exhibitions less than two months later.

Georg first made his mark as a speed skater, winning a three thousand meter race in Zürich in 1937 and finishing sixth overall at the Swiss Championships in Davos in 1938. That same year, he came to England to study both figure and speed skating. In no time flat, he earned the National Skating Association's Gold medal in speed skating, gave exhibitions during the intermissions of hockey games at Streatham Ice Rink and beat the country's summer record for the one mile race. He turned professional in London in 1939, emerging as one of the world's experts in two of skating's biggest novelties at the time - stilt skating and barrel jumping. 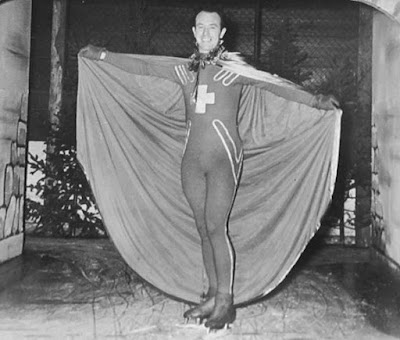 Georg made a name for himself in America during World War II by offering 'his services' up to skating clubs who were holding carnivals. He was a hit from Lake Placid to Lake Arrowhead and went on to appear in Sonja Henie and Arthur M. Wirtz' show "It Happens On Ice" at the Centre Theatre and a number of smaller scale touring productions such as Michael Christie's Ice Revue of 1942, New York Ice Fantasy and McGowan and Mack's hotel shows. His popularity led to invitations to tour with larger scale productions like the Ice Vogues and Holiday On Ice. He even adapted his act to rollers for the "Skating Vanities" tour. Skating also took him to warmer climes, like Colombia, Argentina, Honolulu and Haiti, where he performed for a former ruling family. 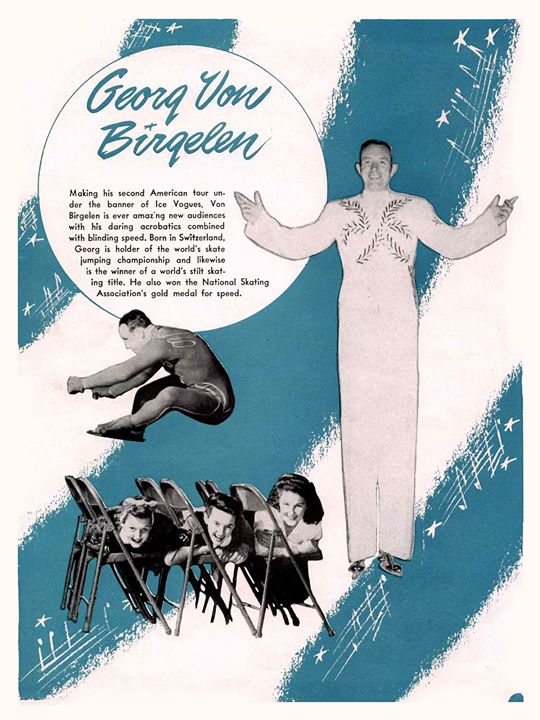 Georg's performances were always huge hits with audiences. He'd usually start by dashing around the rink at razor neck speed and quickly stopping on one foot, spraying snow on the audience. He skated in two foot stilt skates and leap over all manner of things - two kitchen chairs set fifteen feet apart; two kitchen tables, thirty inches high and ten feet long; even an army jeep. One of his most popular tricks was a 'blind' leap through two paper hoops. The first hoop was thirty inches in diameter and the second only two and a half feet. The paper would, of course, obstruct his view of the second loop and he'd have to contort himself in the air to make it through the second one that was hiding behind. This trick was, to audiences, as thrilling and mystifying as any magic trick. 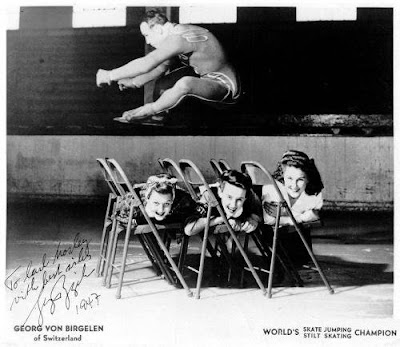 Something much bigger was at play while Georg taking America by storm. He became entangled with a former skater named Lilly Stein, who was under surveillance by the FBI. Lilly was a Jewish, New York based double agent for the Nazis who would sleep with men, then attempt to blackmail them "to give up secrets". In 1941, she was one of thirty three people arrested as part of the Duquesne Spy Ring, the largest espionage case in American history. Very curiously, passenger manifests show that Georg travelled to and from Portugal in 1940, listing his point of contact in America as Lilly. In his book "Double Agent: The First Hero of World War II and How the FBI Outwitted and Destroyed a Nazi Spy Ring", Peter Duffy noted Georg "was described by the Bureau as Stein's Swiss boyfriend in an apparent attempt to distinguish him from the multinational pack." What role, if any, Georg may have played in these matters is unknown. 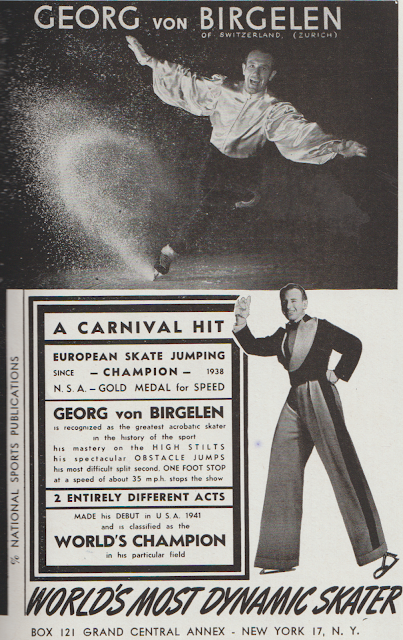 After the War, Georg started his own small-scale touring production called Symphony On Ice. He and his wife/assistant Eileen Meade (whom he met while touring with Holiday On Ice) headlined twice a day shows in shopping malls, restaurants and fairs for decades and were engaged for some time at the Viking Restaurant in Dania, Florida. Georg and Eileen's shows featured the usual ice show fare of the time - figure skating, comedy acts, live musicians and variety numbers. At each show, they'd pick a youngster from the audience and take them on a sleigh ride around the rink. At one nightclub performance in Boston, they performed before a Saudi Arabian king. Eileen recalled, "He insisted on a second performance. His reason was somewhat unique. Several of his favourite wives accompanied him on the trip, but he'd only brought one to dinner. So he wanted to bring the rest of them down so they could see the show." These shows continued until 1984, when Eileen and Georg decided to stay a little closer to their home in Maryland. They supplemented the income from their ice shows by teaching at the College Park Ice Skating Club. 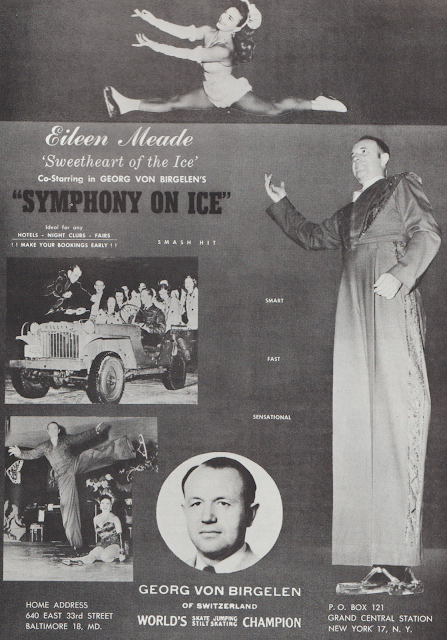 Georg acted as the first manager of Baltimore's Memorial Stadium Ice Rink and later taught skating and operated Von's Custom Skate Shop at the Northwest Ice Rink. He collapsed at the rink and died on October 8, 1990 at the age of seventy five, leading behind a legacy as one of skating's greatest tricksters.

Skate Guard is a blog dedicated to preserving the rich, colourful and fascinating history of figure skating and archives hundreds of compelling features and interviews in a searchable format for readers worldwide. Though there never has been nor will there be a charge for access to these resources, you taking the time to 'like' the blog's Facebook page at http://www.facebook.com/SkateGuard would be so very much appreciated. Already 'liking'? Consider sharing this feature for others via social media. It would make all the difference in the blog reaching a wider audience. Have a question or comment regarding anything you have read here? Have a suggestion for a topic related to figure skating history you would like to see covered? I'd love to hear from you! Learn the many ways you can reach out at http://skateguard1.blogspot.ca/p/contact.html.
Posted by Skate Guard Blog at July 14, 2020
Email ThisBlogThis!Share to TwitterShare to FacebookShare to Pinterest
Newer Post Older Post Home