Do you ever wonder what would have happened to figure skating if they never discontinued the compulsory figures? The current generation of skaters - or many of them - may not even know what compulsory or "school" figures even are, but they would certainly have an impact on competition today.

Compulsory figures were a discipline and proponent of figure skating competition that required skaters to carve patterns or 'figures' onto the ice. They were the bane of some skaters existence, keeping them or prolonging them from topping the podiums at elite competition. In the 1980's for example, skating stars like Brian Orser and Midori Ito were really hurt by the inclusion of compulsory figures in competition. For others, like figures specialists Beatrix Schuba of Austria, who won the 1972 Olympics with a dismal showing in free skating, the high percentage of weight this portion of competitions played ultimately owed to their success. And we can't really fairly criticize skaters like Schuba for winning the Olympics, even if their free skating was sub par, because that's how it was back then. 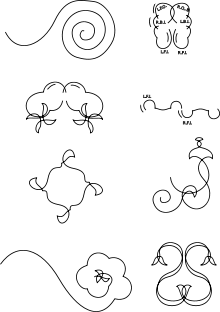 If you want to really get all historical up in here, the very first time that figure skating was introduced as an Olympic sport, at the 1908 SUMMER Olympics, there was an entire discipline called 'Special Figures' outside of regular 'figure skating', devoted entirely to skaters creating their own complex patterns on the ice.

When I started skating, they were phasing out 'patch time', where skaters silently concentrated on small patches of ice, tracing and retracing loops, brackets and rockers with the aid of a scribe. It was the part of training many skaters either rolled their eyes at or dreaded. It's hard to imagine that at one time this part of figure skating competition counted for 60% of the skaters scores. In the following years, due to lack of interest, and the rise of popularity of figure skating as a televised sport, figures became tired and unmarketable, and finally were skated for the last time at the 1990 World Figure Skating Championships here in my home city of Halifax, Nova Scotia, where Yugoslavia's Zeljka Cizmesija skated the final figure in world championship competition.


While somewhat unappealing to the masses and definitely not most exciting, figures did teach skaters valuable lessons that the sometimes awkward and frantic footwork sequences and "transitions" of today do not seem to - things like holding edges, posture, concentration and improved general technique. While I personally agree with the decision to exclude compulsory figures from elite competition, one has to sometimes wonder what impact they would have made on today's world of figure skating?

The discouraging reality is this - today's skaters don't have time or "room" in their performances to hold edges, perform simplistic and beautiful footwork sequences, perform a nice delayed axel jump into a gorgeous layback spin or end their programs with stars into an Arabian, Russian split jumps and scratch spins. These elements, however beautiful or classic, do not earn the big points. I do think something is to be said for simplicity sometimes.

While I think today's crop of skaters could greatly benefit from exposure to figures and more traditional (and choreographically appropriate) figure skating elements in their programs, until the new system rewards quality over quantity, the days of watching skaters force their way through twizzles and three turns are far from over.

Skate Guard is a blog dedicated to preserving the rich, colourful and fascinating history of figure skating and archives hundreds of compelling features and interviews in a searchable format for readers worldwide. Though there never has been nor will there be a charge for access to these resources, you taking the time to 'like' on the blog's Facebook page at http://www.facebook.com/SkateGuard would be so very much appreciated. Already 'liking'? Consider sharing this feature for others via social media. It would make all the difference in the blog reaching a wider audience. Have a question or comment regarding anything you have read here or have a suggestion for a topic related to figure skating history you would like to see covered? I'd love to hear from you! Learn the many ways you can reach out at http://skateguard1.blogspot.ca/p/contact.html.
Posted by Skate Guard Blog at March 02, 2013
Email ThisBlogThis!Share to TwitterShare to FacebookShare to Pinterest
Newer Post Older Post Home