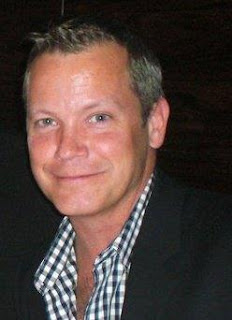 After winning the U.S. junior title and competing for years as a senior competitor at the U.S. Figure Skating Championships, with a backflip, a flourish and an amazing skate, Doug Mattis turned professional in an instant and wowed audiences for years with his creativity, amazing sense of humor and fabulous skating. Armed with solid triple jumps, a backflip Scott Hamilton would be jealous of and a cantilever that's about sickening as it gets, Doug excelled as a professional, performing at the 1994 Gay Games and finishing second at the 1994 U.S. Open Professional Figure Skating Championships, beating World Champion Alexandr Fadeev and Olympic Silver Medallist Paul Wylie in the process. A few years later in 1997, he again defeated a strong field and became the American Open Pro Figure Skating Champion. Always a showman and an all around fabulous guy, Doug has proven a wonderful ambassador to the sport. It was my absolute thrill to finally get a chance to interview him. As I honestly consider Doug among my favourite skaters, I hope you will all enjoy this interview as much as I did!

Q: You're wonderfully positive and encouraging to ALL of today's U.S. skaters. What U.S. skaters or teams do you think will really make a splash next season?

A: Thank you for your kind words. Although I am proudly partial to our U.S. team, I am steadfastly encouraging for all skaters around the world! I think that when everyone skates their absolute best... when that happens, that podium truly has so much of which to be proud. As far as skaters that are going to make a splash next season... although I see deep talent in ladies (particularly coming up out of novice and juniors), pairs and (of course!) ice dance... I’d like to focus on those making a splash in the men's event. I think the groundwork for breakthrough performances has already been laid. Joshua Farris and Jason Brown have improved so much this year and I think Alex Johnson is demonstrating that artistry and choreography are one of the most significant ways to separate oneself from the pack, as it were. I would like to think that skaters like Alex and Jeremy Abbott are setting the trend for men's skating - amazing jumps are compulsory - but it's the SKATING that separates one from the crowd. Those that stand out by creating innovation between fantastic jumps... they will resonate most effectively with the crowd and (hopefully) the judges.

Q: Where are you coaching and what's your funniest coaching experience to date?


A: I coach freelance - and mostly choreography. Sometimes I'll have a main coach ask me to work on a particular student’s jump or spin, but mostly I am brought in by coaches to create program and then I go back to do brush-ups and tweak the final product. The younger girls I work with sometimes call me "hair and makeup" because I’m there to make them look pretty. As far as humorous coaching stories, a few years back, I took a young, precocious, basic skills student (with her main coach) to her first competition ever. We stood at the side of the rink to orient the program; which direction it would start, where the elements would be, and so on. She pointed to the judges and asked, "Who are those people?" I said, "Those are the people that will be judging you." She said, "I’d prefer a jury of my peers, thank you very much." Love the things kids say! I entertain my non-skating pals with funny stories like that all the time.


Q: What was your favourite program or performance you skated?


A: I think I’d have to name the two programs I did in the 1994 U.S. Open - the "Hypnotized" technical program and the "Imitation" number for the artistic, that year. Although I developed the concepts, I had help. Master choreographers Christopher Nolan and Cindy Stuart helped me with both programs. The "Imitation" number was put together during a time of unprecedented skating popularity. I wanted to show the crowd that I could do some of the signature moves of skating’s great personalities…and show fans that what they really loved about those skaters wasn't the signature moves…but those skaters, themselves, who are bringing their personal talents to the art of ice skating. I would also have to mention the AIDS tribute number I did for a number of years in the 90's, "Can’t Cry Hard Enough," once again put together with input from Cindy Stuart and Chris Nolan. I lost so many of my friends during the 80's and 90's…skating that number was always emotionally gut-wrenching…but hugely satisfying as a tribute, as well. It was my way, through skating, of expressing my determination to never forget those beautiful souls we have lost to AIDS.


A: Hmmm…hard to answer this without going "all-out funny." Hmmm…how to best pass the time on a desert island…? I got it! Laughs and visual entertainment. Ummm…Yvonne Gomez and Kim Navarro because they are both so beautiful and we laugh so hard every time we hang out…and I guess John Zimmerman because Vonnie, Kimmy, and I will need somethin’ to look at. (Sorry, Silvia—I love you, too!)


A: I’m going to shy away from naming my favourite skaters of today. I am steadfastly supportive of each and every one of them reaching their full potential. (Sounds like I’m running for office. Ha! But it’s the truth.) Growing up, I was inspired by Robin Cousins’ inventiveness and musicality, Scott Hamilton’s ability to reach and audience, and I was spellbound by Janet Lynn and Dorothy Hamill. I am biased when naming my longtime great friend, Debi Thomas, who I thought was an amazing balance of athleticism and great positions. But I think my favourite skater of all-time is an old pal—Kurt Browning. Kurt's humor (on and off the ice) and his ability to create movement that looks like magic. Yeah, that's the stuff that really makes skating special for me.

Q: You've been really involved in Young Artists Showcase. What excites you most about this project and what benefit do you think it brings to aspiring young choreographers?


A: Three things strike me as being most exciting about Young Artists Showcase. The first is functional; one of the primary goals is to inspire the next generation of choreographers by giving them a forum in which they can be as expressive and inventive as possible. As we plan for YAS4 (hopefully in the fall), I contend that this inspiration of new choreographers is starting to happen! So many YAS alumni have been increasingly successful and empowered…I’m so proud of each and every one of them. The second thing is that skating fans and young skaters are watching. With hundreds of thousands of views on YouTube, YAS pieces are both entertaining skating fans who seek more artistic skating outlets—and young skaters are, hopefully, watching and seeing that artists have a place in skating—and those young skaters watching YAS are realizing that even skaters who don’t make the Olympic Team can choose to create choreography professionally. If more skating fans stay interested and tuning into skating…and more young skaters stay in skating as a result of being inspired by YAS. That's a big "win" for the skating industry. Thirdly, there is the inspired influence YAS has had—and can have, in the future—on competitive skating. Skating fans and judges crave thrilling performances at Nationals and Olympics. Inspired and determined choreographers are the folks that can make those memorable performances happen more often. We hope YAS will help that happen! YAS participants and choreographers can be seen throughout different levels at Nationals…and if the end-result of YAS is more "Wow! That took my breath away"-programs in competition…fans, skaters, and judges will be more delighted, let alone me.

Q: Speaking of choreographers, who blows your mind when it comes to choreography?

Q: Who is the one most underrated figure skater of all time?

A: Maybe people sometimes confuse the word "underrated" with skaters that simply never reached their potential but were recognized as being huge talents. I’d go back to a couple of amazing free skaters of my childhood out of Atlanta—Laura Steele and Stacey Maxwell. Both were phenomenal freeskaters…and perhaps underrated because their amazing free skating talents were offset during a period of time when figures both existed and were highly valued. I wish YouTube had video of the two of them! They were both…spectacular.

A: Absolutely there should be more pro skating competitions! I would love to see more that are specifically focused on artistic achievement…as well as some that would be specifically about jumps—like a skating version of golf’s "skins game." You land that triple axel the most times? You get the money. I think that kind of format would be fun—back-to-back with an artistic event.

Q: When is the last time you performed and how has your training been going for Sochi 2014?

A: If there is an Olympic wine-tasting event in Sochi…LOOK OUT. I’ll be there. THAT training is coming along nicely. The comedy answer to "When is the last time you performed" is "Did you see the lesson I gave last week?" I last performed in 2002 and I was happy to wake up one morning and think…"I think I’m done." I have been so very, very lucky to have achieved just about every goal I had in competitive and professional skating---I knew it was time to change my definition of success and move on. In the last decade…that definition of success includes creating choreography as a means to help young people express themselves in more meaningful ways, framing the coaching of skating as a set of life-skills that every participant will take with them into adulthood, and spending more time "giving back" through supporting projects like Young Artists Showcase, Ice Theatre of New York, Skate For Hope, The Michael Weiss Foundation, and An Evening On Ice. Someone always happened to be "there" to help me or help me create perspective along the way. I'm so happy to spend increasing amounts of time doing the same for skaters and artists in our skating community.

Check out Doug's favourite charities and events: http://youngartistsshowcase.net/, http://www.icetheatre.org/, http://www.skateforhope.org/, http://www.michaelweiss.org/ and http://www.usathleticfoundation.org/events.html. If you don't, an angry drag queen from Halifax, Nova Scotia will kick you right in the junk. And you don't want that, do you? Follow me on the Twitter at http://twitter.com/SkateGuardBlog.
Posted by Skate Guard Blog at March 10, 2013
Email ThisBlogThis!Share to TwitterShare to FacebookShare to Pinterest
Newer Post Older Post Home
"As a rule an author has one or two popular ways of contrasting the past with the present. He can treat the past as lying in comparative doleful ignorance, or he can explain that the past was infinitely superior to the day we live in. Of course, either method is the popular journalism of the moment, and in reality there is no sharp contrast, but a gradual transition which leads the past into the present." - Joel B. Liberman, Skating Club Of New York