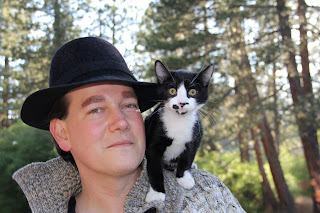 Competing in ten U.S. Figure Skating Championships as a senior men's skater from 1989-2002, Shepherd Clark not only had a long career but certainly a very successful one as well. His long spanning skating career included wins at the Nebelhorn Trophy in 1989 and Finlandia Trophy in 1996, and a silver medal at the 1989 World Junior Figure Skating Championships. In his own words, Shepherd Clark took the time to share his story and talk about the skating world today, his personal life and projects and also brought up his intense spirituality.﻿

Q: What are your memories of skating here in Canada?

A: I have many fond memories of Halifax. The people were exceptionally kind and are by far the best skating family in the entire world. Canadians are truly amazing people.

Q: Where are you currently living and what projects are you working on? Are you still actively involved in figure skating? When is the last time you have performed?

A: I'm in Hollywood/Los Angelesand I live in other locales. People in Hollywood universally love figure skating. I'm in a motion picture as myself this year, as well as having a TV series and appearing other TV shows and pictures. I am also starting a shopping network show, internet presence, a radio show in Hollywood, and music videos with an artist from Europe. My cat is also included in some of what I'm doing in Hollywood. I bring Mr. Puddin' to red carpets on occasion! I design jewels, jewelled oil paintings which get their designs from me skating on the ice, skating the painting's designs... I'm also designing mass market jewels for many famous stars and charitable causes, fashions made from a new high tech fabric which includes crystal technology, and designing some collector coins for various causes. It is surreal to be working with many people I have admired since I was a child, and to meet "old Hollywood" stars, as well as the occasional royal. I once taught Arnold Schwarzenegger to skate, and I like to go to parties with people who were in "Wizard of Oz" ! It is just totally surreal. Many people in Hollywood are fascinated by figure skating, and wish they could skate. Sometimes I will teach friends of mine in Hollywood to skate. I work EXTREMELY hard to use all that God has given to me to be a blessing to others. These are challenging times, and it is my belief that we need to constantly seek God for wisdom to make the best choices these days. I am finding that this is the very best way to approach anything in life. Trust God. I still skate and perform, yet in a new showbiz context. I'm being called "Shepherd, The World's Jewel Artist". One thing that you may find interesting is my work with Uschi Keszler who founded Pennies In Action to support Dr. Brian Czerniecki, who may have the cure for breast cancer and possibly many other forms as well, thus Uschi is a hero to me. What she is doing is truly historic and unprecedented. As you know, cancer has impacted our sport immensely. Dorothy, Peggy, Scott etc. I design all manner of products to solve the plague of cancer which is growing worldwide. Handbags are great fun to design as they are small works of sculpture. Using my life's work to help with many important causes is a great joy to me and a perfect investment of time.

Q: What was your greatest moment or performance as a skater that stands out in your mind?

A: Of all of my performances, it would be really hard to chose just one particular skate. I grew up with figures, so some of my best memories are when I would lay out an amazing figure. WHY? Because, when I started, my figures were terrible, so being able to overcome that weakness was nothing short of a miracle. I liked doing things that no one else would try, such as placing the triple loop on another triple or practicing the quadruple loop. Wearing costumes with real gems was also a realized dream of mine, as well as many other things. Skating has afforded me much TV experience, as well as motion pictures, and many other forms of media. Hollywood is a natural home for me. I would like to add that I am an entrepreneur in a wide variety of industries, which was developed by my family and my skating. It is funny when people find out the variety of things which my life has included, such as energy, medical. art, jewels, Hollywood, high tech, cosmetics, supplements, fashion, coins, etc. I am also a HUGE cat lover! The first charity that I was ever exposed to was my mother's work finding homes for many AND I MEAN MANY, rescue cats. Skaters are much like cats by the way in which they fight to remain upright. I am "part cat".


Q: Of today's competitors, who are your favourites? Who do you predict to see on the podium in Sochi?

A: My favourite skaters are many. Truly, I am pulling for all of them simply to do their best. When I watch, I feel what they are feeling. I am an extremely spiritually sensitive person, thus I get really emotional when I watch all skaters. My career model is an unusual one, as I competed for many years beyond most. Figure skating is the world's most glamorous sport. It is dancing upon a crystal, "The Jewelled Sport", and I know that God has blessed my life. I am an unusual jeweller who dances on a crystal. In a conversation with Dorothy Hamill, we agreed that of all skaters we both would have loved to have met Sonja Henie. I must say that there are many others whom I love sincerely for different reasons. I have dealt with things that people would never know. I am only alive today by miracles which Jesus provides to me, thus my best friend is He. I truly cannot recommend Him enough. All the great and exciting things happening to me today are a result of His love and provision in my life. He's The Author of Life. When I look at the current line up of world level skaters, I must say that it is now almost impossible to predict a championship. To me, the most important characteristic of an ice champion is to be a nice person with good character. I love a Special Olympics Team member the same as I love an Olympic Team member. I'm truly moved by seeing the miraculous, the unlikely, such as Sarah Hughes fabulous Olympic performances in 2002.

Q: What about the new scoring system? Do you think it is working out?

A: The scoring system is interesting to me. The 6.0 and 10.0 pro systems were terrific too, as the audience could self-judge and compare their marks with the actual judges. We could anticipate the extremely rare, exquisite, and thrilling perfect mark. This is now gone, yet we have amazing spins and step sequences. It is true that skating has advanced, yet many people with whom I speak sense that skating is missing something as a mainstream entertainment sport. There was a formula that got beat to death in the 90's through pseudo-competitions on TV which were a highly indulgent phase for competitors, as well as lucrative, yet these business models did not consider the future. They need to have a perpetuality built into them, a cultural context, a true relevance, so that they get something REAL accomplished. As an entrepreneur, what I witnessed concerned me from a pure business standpoint, because I did not see ANY meaning which spilled into the conscious of the global populace. One of my objectives in business is to change this reality. I have coached, judged, competed, conducted seminars, and just about every kind of experience skating offers. Many people had assumed that I was coaching or judging. In my heart, I know that God gave me a soul to excel at such and the experience to back it all up, yet skating was also a major factor in my father's illness and death at a pivotal point in my career. I witnessed things as well as experienced things which collectively led to me nearly taking my life many years ago. It is truly to the credit of Jesus Christ that I am alive and prospering. My life testimony is quite graphic and diverse. Skating is one facet of my life and still very much a part, so is the persecution which follows one who stands up for what he believes. I have an intense testimony to share, which will certainly shock the listener. God has a plan for me which is highly unusual. Skating is simply a part of this plan. Yes, I am still skating, yet my validation is from God and not from anything else. This brings me to my advice for skaters, or anyone who is considering participation in the world's most exquisite sport: "The Jewelled Sport" of figure skating where we dance on a crystal.
.
Q: What are your biggest beliefs in life?

A: RULE #1: Everything is a spiritual act. Approach everything that you do as a spiritual being who is participating in a physical endeavour, with the knowledge that you will be tested. God is your coach. RULE #2: Never, ever forget rule number one.