"Teamwork": A Good Idea Or An Awful One? 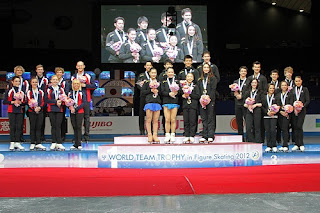 With a new team format style competition making it's flashy Melissa and Joan red carpet entrance at the 2014 Winter Olympic Games in Sochi, Russia and the final big event of the 2012/2013 figure skating season - The World Team Trophy - just around the corner, the concept of team competition is a hot topic in the figure skating world. Although fans will get to see more of their favourite skaters in Sochi, it will certainly be at somewhat of a cost, as many of the solo skaters and pairs and ice dance teams will no doubt have to play "double duty" and compete in solo and team competitions, which raises the question about whether or not a team format style competition to replace major solo competitions might be the ticket to get people in those seats. Although it's relatively new to the ISU eligible skating world, it's certainly not a new idea. Professional figure skaters have been doing it for decades.

The concept of a "team style" competition was first popularized in the early 1980's, when Dick Button's Candid Productions introduced a team format at the World Professional Figure Skating Championships. From 1980-1985, a team format was maintained and stars like John Curry, Jayne Torvill and Christopher Dean, Tai Babilonia and Randy Gardner, Janet Lynn and Scott Hamilton participated in a team format professional competition, with technical and artistic programs. At the same time, a series of professional competitions was being held internationally in such countries as Japan and Canada, featuring stars like Cousins, Babilonia and Gardner, Denise Biellmann and Toller Cranston. This competition, too, utilized a team format.

Placing less individual pressure on skaters, different team formats were popularized in the 1990's, when professional figure skating competitions were at the ultimate height of their popularity. Huge household names like Kurt Browning, Brian Boitano, Katarina Witt, Kristi Yamaguchi, Oksana Baiul and Nancy Kerrigan participated in events like Ice Wars (which pitted the U.S. against "The World"), the World Team Skating Championships (which featured teams from Europe, Russia, Canada and the U.S.), various USFSA sponsored pro-am competitions and even "The Battle Of The Sexes", where mens and ladies skaters competed head to head. After the men won in 1996, the ladies took the title the next 2 years. The events were highly popular with the skaters competing and audiences alike.

Although the oversaturation of professional, "made for TV" competitions in the 90's ultimately resulted in the implosion of professional competitions, times are changing and people are growing weary of cookie cutter programs and yearning to be entertained by the skating they are seeing again. Would a team format across the board at eligible competitions be a more inclusive idea or a faulty one?

Let's say, for instance, you had one entry per country and any country with skaters in all four disciplines could participate and have their entrants skate a technical program - yes, a technical program. I didn't say short program. Although you'd only have one entry per discipline per country, it would force federations to develop skaters in all four disciplines, and would also put less pressure on the individual skaters and make the format more marketable to TV and other media. You could start out with as many teams as you wanted, and have the top 10 teams all participate in an artistic or free skate. It might not be the best idea, it might have kinks, but I'm sorry - look at what we have going on now. At least the skaters would be having fun, right? I don't see what's so fun about some of the foolishness that's going on now.

Then again, you have to look at how tired these skaters are going to get playing double duty in solo AND team competitions. Imagine if you were Suzy Salchow who had a great skate in the team short program and free skate, helping her not so competitive team finish say, 4th instead of 10th, then went out and dashed your medal hopes in the solo competition because you have bigger bags under your eyes than Lindsay Lohan after an all you can drink for $4.99 mimosa buffet in Cancun. Who needs that?

At any rate, we need more "fun" competitions and less fledgling international ones. Some of these skaters are competing in more Senior B internationals in the fall than you can shake a stick at, and then everyone acts all surprised when it's Nationals and Europeans/Four Continents time and half of them have already peaked. I say they have a couple senior B internationals, a Grand Prix, a Junior Grand Prix and a handful of fun, team or pro style competitions and then the biggies.

It's time for the ISU and federations like Skate Canada and U.S. Figure Skating to take owness of the fact that changes need to be made to make skating fun again. They need to listen to the skaters and the audiences and really  do what's best for the sport. Ironically, that's also called teamwork. Just putting that out there.

After that episode of "What Really Grinds My Toe Picks", I feel like I'm going off more than Eddy from AbFab in her courtroom rant, which much be watched repeatedly. It would be rude not to, I say.


Follow me on the Twitter at http://twitter.com/SkateGuardBlog.
Posted by Skate Guard Blog at March 19, 2013
Email ThisBlogThis!Share to TwitterShare to FacebookShare to Pinterest
Newer Post Older Post Home
"As a rule an author has one or two popular ways of contrasting the past with the present. He can treat the past as lying in comparative doleful ignorance, or he can explain that the past was infinitely superior to the day we live in. Of course, either method is the popular journalism of the moment, and in reality there is no sharp contrast, but a gradual transition which leads the past into the present." - Joel B. Liberman, Skating Club Of New York