What Really Grinds My Gears? Ottavio Cinquanta, The ISU And The CoP/IJS Scoring System 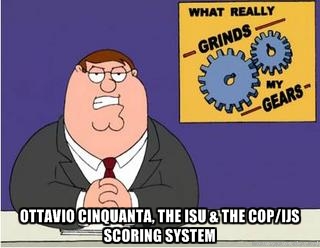 What really grinds my gears? Ottavio Cinquanta, the ISU and the IJS/CoP scoring system, that's what.

In the United States Of America, presidents are allowed to serve 2 consecutive 4 year terms if fortunate enough to be democratically elected by the people of their country in succession. It's crazy to think that in comparison, ISU President Ottavio Cinquanta has comparatively been in power for 19 years, just shy of the equivalent of 5  consecutive 4 year terms in the Oval Office. Imagine George W. in there that long. I don't think the liquor store sells enough rum for that. JUST SAYIN.

A lot can change in 20 years, and a lot has. In the early years of his ISU presidency, Cinquanta was praised widely for his introduction of prize money at ISU eligible competitions and creation of the Champions Series (now called the ISU Grand Prix Of Figure Skating), which organized the many prestigious, pre-existing fall invitational competitions into a series of events that earned competitive skaters money to help offset their training expenses. In turn, the prize money at ISU eligible or "amateur" competitions helped destroy competitive professional skating "as we know it", as there was the same or a greater incentive to stay active in eligible competition for years longer than previously done. Fewer professional opportunities meant fewer creative opportunities for skaters. The importance of keeping those triples instead of progressing as an artist and performer certainly made a difference in the climate of the skating world - and the quality of the entertainment skating fans got to see in televised events. But I digress...

Things changed in 2002, when everything came crashing out into the open at the Salt Lake City Olympics when the judging scandals of the sport that had been going on for years finally got to the point they couldn't be ignored anymore by skating insiders or the media. Jamie Sale and David Pelletier and Jelena Bereznaya and Anton Sikharulidze's "shared gold" quickly made way for a new judging system that is not without great merits or blatant flaws. The one that has been consistent through the good, bad and the ugly figure skating over the last 19 years has been Cinquanta's iron fist rule.

Cinquanta, who has a background in speed skating, has shown little affection for the artistry of figure skating. What was once a thriving sport full of controversy, charisma and creativity has, with the new IJS/CoP system that Cinquanta fiercely defends, dropped in popularity drastically. We're talking about a man who rules with an iron fist and illegally requested that the skating union extend his term until 2014, even though he was age ineligible to run for re-election in 2014. In a sport that's full of age regulations and books of rules, he certainly didn't mind breaking them himself. Where was Cinquanta during the judging scandal of 2002, you ask? Oh, I don't know.. "still reigning", while Marie-Reine Le Gougne and Didier Gailhaguet faced 3 year suspensions. However, Le Gougne was allowed to continue her involvement in the sport in no time, running for presidency of the FFSG (French federation) in both 2006 and 2010. And where's her buddy, Didier Gailhaguet? He's president of the FFSG right now!

Where are we at now under Cinquanta's leadership in 2013? We've got angry skaters, angry coaches, angry federations and confused fans. I don't know about you, but you shouldn't have to have a freaking math degree to choreograph ANYTHING, or understand it on television. We are now looking at a petition circulating social media trying to get the ISU to redeem itself after Patrick Chan's win at the 2013 World Championships, by giving Denis Ten a gold medal for his superb performances. This petition, which you can read or sign at http://www.thepetitionsite.com/760/247/723/award-a-gold-medal-to-denis-ten-for-his-performance-at-the-2013-world-figure-skating-championships/, is signed by people from Brazil, Russia, Ireland, Jordan, Korea, the United States and Israel. All that's missing is a penguin. And I'm sure if there was a skating loving penguin out there with some WiFi, they'd be right on that. I can't see "Speedy" Cinquanta rushing to make it right though.

I'm sorry, but it's pretty hard to explain to the casual fan why a skater who fell twice and made other mistakes won by a landslide. It's those casual fans without math degrees that fill the seats and stay on that channel and watch an entertaining sport instead of move on to the next one. Casual fans are what made the sport. Growing up skating myself and being passionately in love with the sport as a fan, I can't tell you how many times I'd sit down with family and friends who casually enjoyed being entertained by the drama of "6.0 competition" and the entertainment of professional competition. These days even my dearest friends have a hard time feigning interest in a sport they just don't know anymore. And it's not that there aren't positives. It's great to see the "in between" things like footwork and spins getting attention, but if everyone has to do the same ones to have a small piece of the mathematical "Pi", we've lost the essence of what drove people to the sport in the first place. The stories, the individuality, the choreography and the excitement of high level competition are lost WHEN EVERYBODY IS DOING THE SAME DAMN THING. It's like the movie on "Groundhog Day" on ice, only instead of Bill Murray waking up in bed every morning to the alarm clock every day playing the same song, we as fans of the sport are treated to the same "choreography", music, awkward footwork sequences and systematic spins at every turn. That's why when you see someone make it work the odd time - like for instance the German team of Zhiganshina and Gazsi, who came up with one of the more original free dances we've SEEN in this system at Worlds - it gives you a flicker of hope that this system CAN work if people take risks. But 10th place doesn't mean it's working. Chan winning doesn't mean it's working. Sorry kids, you can keep your math. I'm not in the mood to count.

The reality of the situation is that things are not working the way they are, and if the person in charge of it all is not willing to cooperate and make positive change within the sport, we are not going to see any until the next person steps up. Let's just hope Cinquanta doesn't ask for another extension.