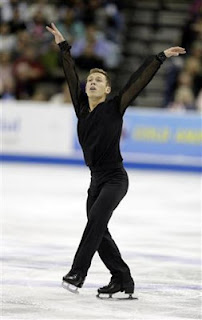 Competing this year at his 8th U.S. National Championships (having competed in the novice, junior and senior ranks), Grant Hochstein is not only an experienced athlete but a determined one. He was twice won the U.S. Collegiate Championships and placed 5th at the Junior World Championships in 2010, a remarkable feat indeed. He has also finished 5th at the Junior Grand Prix Final the same year and has competed internationally at events such as Skate Canada, Finlandia Trophy and the Ondrej Nepela Memorial in Slovakia. At 5'5", Hochstein is a small but mighty powerhouse of a skater with big triple jumps and a modest sensitivity for music. Coming into his own just in time for the Olympic season, Hochstein hopes to again crack the top 8 at the U.S. National Championships and we all, I'm sure, can't wait to see him do it! I had chance to interview Grant about his future goals, training environment, opinions on the judging of the sport and much more:

Q: Mastering the triple axel was something that really has given you an edge you can use to move up in the rankings. When did you first land this jump and how comfortable have you grown with it since then?

A: Triple axels have been on and off since the summer of 2009, which is when I landed my first one. However, moving to Peter (Oppegard) and Karen (Kwan) has really helped me to make it more consistent. I feel confident going into the jump and don't doubt my ability to do it anymore. They have given me a much more sound technique on the jump and expect me to do it all the time.

Q: You have a gorgeous line and musicality on the ice - you remind me a lot of Shawn Sawyer actually! Is the artistic side of skating something that has come naturally to you?

A: First of all, thank you for the compliments. I haven't always been known for being an artistic skater and I don't know I've ever actually gotten the recognition from the judges for my artistic side. However, the simplicity of skating is what I love so much. I enjoy just putting on random classical pieces and making up programs for fun. There is something special about putting emotion and your heart into your programs. That is something that I have always tried to do.

Q: How important is having a sense of humor in life?

A: It's really important to have a sense of humor, especially in skating. If you can't joke around and make fun of yourself, you will never truly enjoy life. We are all under so much pressure, that without that sense of humor, we will crack and our skating will suffer.

Q: You represent the Skating Club Of New York, a club which obviously has a lot of history behind it. How would you describe your coaching and training environment?

A: Well, it's an interesting situation for me, because I don't actually train at the skating club of New York, I train in Los Angeles. But when I was making the move away from Michigan, I tried to look objectively into which club would be the most beneficial to me. SCNY has been nothing short of amazing to me. I've never been part of an organization that is so supportive of it's athletes. Like you said, there is so much history with the club, that I was honored when they accepted my membership request. Training in LA with Peter and Karen has been great. Again, when I wanted to make a change away from home, I really needed to look at which coaches could offer me the most and which athletes I would be training with. I was so impressed with what Karen and Peter did with Caroline Zhang in the 2011/2012 season, that they were definitely among the front runners. When I went to try out, I was so impressed by the level of skating and the support everyone has for one another at East West. Karen and Peter offer me a great balance too. Karen is goofy and free spirited and Peter is much more serious and structured in his lessons. I think I need that in order to succeed. Karen also does my choreography and I think she is brilliant.

Q: How has the sport of skating changed for the better and/or worse since your first trip to U.S. Nationals as a novice in 2005?

A: Gosh, so much has happened since my first Nationals. It's hard to believe that I've been to nationals 8 times! The IJS is definitely a change. I'm more of a 6.0 fan, but it has definitely forced the skaters to broaden their horizons in the things they have to do in skating. I would, however, like to see a freestyle skater dominate again, like Michelle Kwan did. Nobody has, or will for that matter, do more for our sport than she has.

Q: Who are three famous people, dead or alive, you'd most like to meet/have met?

A: Of course, meeting and getting to know Michelle Kwan has been so amazing for me. It is because of her that I skate. She's such a brilliant and caring person and I think in this sport, we have all been blessed to have witnessed her skating. As a history major, my favorite historical figure has been Marie Antoinette. So much has been written about her, and so much that isn't true, that I would love to sit down and get to know what she was really like, and witness the amazing pressure she must have been under. Finally, I think any Christian alive would give anything to meet Jesus Christ and to learn from him. The amazing thing about our religion is that if we open our hearts and really listen, we can do just that. Each day we should learn from him and what he has taught us to strive and be better people. So, to meet him in the flesh would be the most amazing gift in life.

A: I have different songs, for different moods and situations. Of course, I'm a big Britney Spears fan. I also really like Maroon 5 and Kelly Clarkson. Before I compete, I always listen to "Lose Yourself" by Eminem.

Q: Who do you perceive as your biggest competition?

A: This is a good, and challenging question to answer. The U.S. has such a strong field of senior men, that you can't really pick just one person. I've grown up competing against Adam, Ricky, Armin, and everyone, so it's kind of cool to see everyone stick it out and keep going for it.

Q: What is your favourite program you've skated to to date and have you started working on programs for next season?

A: Hmm... I think my favorite program has to be my "Sleeping Beauty" short program from the 2009/2010 season. That was the program that I won the short and Junior Worlds with and skated it clean every time I competed except once. It's always been special to me. This season I'm really excited for my long. It's going to be awesome! Choreographed by Karen Kwan, too!

Q: Among the skaters you compete against, who are your favourite to watch?

A: I think of the people I compete against, I most admire Adam Rippon. He has a flow and a passion for skating that is really great. He's also a nice person. There are so many guys who forget that they are regular people and Adam doesn't. I admire that.

A: Goals for the season... To land quad toe consistently, all year. To break back into the top 8 at nationals. To be proud of the effort I put out at competitions, and to finish the season with no regrets. We never know how long we have with the sport and I think we should be making the most of it, each and every day.

Q: Who are your favourite skaters of all time?

A: Of course, I most admire Michelle Kwan. Her 1998 Olympics long program is the reason I started skating. I always gush about her and the type of person she is, so I won't do too much of that here, but I am constantly in awe of the legacy she has left and is continuing to leave. I also think Matt Savoie and Alexei Yagudin were incredible. I think Tim Goebel didn't get the credit he deserved for all of the great things he did for skating. In training with Caroline Zhang on a daily basis, I have really grown to respect her as a person and an athlete. She is so talented and such a hard worker. I hope she makes the Olympic team!!

Q: How has figure skating changed your life? What do you love most about it?

A: Skating had been, probably the most influential thing in my life for the past 14 years. I definitely wouldn't be living in L.A., that's for sure. I wouldn't have been able to travel the world and do the things I've done without skating. I've learned so much about resilience and determination. It has taught me that nobody what anybody else thinks, if you believe in yourself, that is enough. I love training every day and then going to competition knowing you are ready. I love the feeling you get when you finish and know you couldn't have done anything more. I love being alone on the ice, right before your music starts. I don't know if I can even say why, but there is a special and magical feeling about that moment. Skating truly has been special for me.

Skate Guard is a blog dedicated to preserving the rich, colourful and fascinating history of figure skating. Over ten years, the blog has featured over a thousand free articles covering all aspects of the sport's history, as well as four compelling in-depth features. To read the latest articles, follow the blog on Facebook, Twitter, Pinterest and YouTube. If you enjoy Skate Guard, please show your support for this archive by ordering a copy of the figure skating reference books "The Almanac of Canadian Figure Skating", "Technical Merit: A History of Figure Skating Jumps" and "A Bibliography of Figure Skating": https://skateguard1.blogspot.com/p/buy-book.html.
Posted by Skate Guard Blog at May 07, 2013
Email ThisBlogThis!Share to TwitterShare to FacebookShare to Pinterest
Newer Post Older Post Home