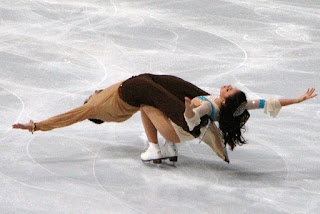 Spain's Sura Hurtado Martin and Adrian Diaz Bronchud are an ice dance team that is climbing the ranks internationally with determination, purpose and good, CREATIVE skating. Full of something that can't be taught - charisma - their programs are full of visually stunning lifts, good projection and improved speed and edging. The first ice dance team to ever represent Spain in ISU competition, they are pioneers of the discipline in their country. With 5 gold medals (at both the junior and senior levels) at the Spanish National championships to their credit, the team has risen quickly in the deeply entrenched and sometimes "slow moving shuffle" of ice dancing rankings. In 2009, they finished 32nd at their debut at the World Junior Championships. The next year the were 16th, and the next 9th. That same season, they made their debut at the European Championships and World Championships. This past season marked their 3rd trip to the European and World Championships, where they finished 15th and 19th respectively. Taking artistic risks with their programs, their free dance last year was set to music by Stevie Ray Vaughan and was a joy to watch. After training in London, England, the Spanish duo relocated to Montreal, Canada in late 2011 and have been training with the brilliant Canadian ice dance team of Marie-France Dubreuil and Patrice Lauzon (who I can't gush about enough). With a chance to compete at the Winter Olympics and make history for their country on the line this fall at the Nebelhorn Trophy in Germany, it's certainly a magical opportunity for this team in the making - I hope to see them make it! I was fortunate enough to have a chance to ask both Sara and Adrian about their careers, the ice dance team they look up to most, their goals and more in this interview:

Q: Representing Spain as ice dancers, you are certainly pioneers in a way, as Spain is not a country known for ice dance. When people think of skaters from Spain, they think about Javier Fernandez, Yvonne Gomez and Marta Andrade for example. What is it like being the first ice dance team to take your country by storm?

A: It's an honor to be pioneers in this discipline in Spain. It's very special knowing that you are making history with every step you make and at the same time is a big responsibility. I don't know if we are truly aware of how much we are doing. We just keep going and we look forward to achieving our goals. Every day we are asking for more. We want to get better and be at the top one day. Sometimes, we have to look back and realize how far we have come in such a short period of time.

Q: Who are your favourite ice dancers and why?

A: Our favourite ice dancers from all times are Isabelle and Paul Duchesnay. We think that what they did is one of the greatest things to do for ice dance. They were original, they took risks with every program and that way, ice dance started evolving as a discipline and doing that, as a skater, is the biggest challenge. We love the way they did all those intricate transitions and made it look so easy and seemless. It's pure art.

Q: How would you change the way ice dancing is scored?

A: We think the system that we have now is pretty good. It has evolved a lot since the 6.0 one and every season changes a little. Personally, we would give more freedom on the lifts and the elements, specially giving more importance to creativity. The way that it is right now, sometimes we have to change a lot of elements because they won't score high ¨on paper¨. We think this will help to make this sport evolve, see new things, create new elements and go for the wow effect, not the points. It's hard to find the balance between creativity and scores.

Q: What do you think is the most challenging part about ice dance?

A: The partnership. Skating and working everyday with the same person can be very hard, not because of the physical part, but the relationship part. It's hard to spend such a long time with the same person and sharing so much, like the best moments but also the worst. Your partner has to deal with your best days and worst days and work with you at the same time. It is not a team sport where you can rely on 10 other people - it is just 2. You have to understand that on the ice you are one, forget about your personal stuff and think about the other person, not for just you. As single skaters before, if we got mad about something not working it was with ourselves, but when you have a partner everything is more complicated. There are steps, patterns, timing, directions, leading and following... a lot more variables take part.

Q: Do you ever do singles skating for fun, or have either of you competed as singles skaters?

A: Yes, before being ice dancers, we both used to compete as single skaters. Some days we like to play around and do some jumps and spins on our own. It's crazy how you forget about the feeling of jumping and then when you try to jump you remember it again. Adrian can still do double axels and one day he even landed a triple salchow with ice dance boots!

A: In our country, figure skating is not a popular sport at all. When we tell people that we do ice dance, they don't even know that this discipline exists and we have to explain what it is most of the time. The funny thing is that when we tell them that is part of figure skating they all say "OH! I love to watch that on TV, it's beautiful!" We live in a football country. People are starting to know more and more about figure skating, thanks to Javier Fernandez but it will take a big effort and a lot of gold medals to become a popular sport. Also, the amount of ice rinks there are in Spain doesn't help. There are only 8 ice rinks and it's really hard to build new ones because it's always cheaper (in a country like Spainy) to build a tennis court or a football field.

Q: What are your goals as skaters?

A: The greatest goal for us is being Olympians. As every athlete, we think is the best reward you could ever get. Then, also hear the Spanish anthem and feel it from the podium... of course, a medal in a major event would be also one of the goals.

Q: Do you have any ideas for your programs for next season already?

A: Yes, we do! We are working on them and we hope our fans like them! We think are very original and special. We are still in the creation process so probably some things will change during the making of the programs and stuff, but we will be able to tell you more in depth in a few weeks. If you are willing to wait.... hahaha!


Q: What are you most proud of so far in your careers?

A: We can't decide a specific result or score. We think we are proud of every single step we have made and where we are now. We've been only skating together for 5 years and we are 19th in the world. Come on! It's crazy! If 5 years ago, someone would have told us we were going to achieve all of this we would not have believed it and now we are fighting for an Olympic spot for Sochi. It's truly unbelievable. Also, we believe we have so much to give -t makes all of this even more exciting. Now that we know nothing is impossible, we want to reach for the top.

Skate Guard is a blog dedicated to preserving the rich, colourful and fascinating history of figure skating. Over ten years, the blog has featured over a thousand free articles covering all aspects of the sport's history, as well as four compelling in-depth features. To read the latest articles, follow the blog on Facebook, Twitter, Pinterest and YouTube. If you enjoy Skate Guard, please show your support for this archive by ordering a copy of the figure skating reference books "The Almanac of Canadian Figure Skating", "Technical Merit: A History of Figure Skating Jumps" and "A Bibliography of Figure Skating": https://skateguard1.blogspot.com/p/buy-book.html.
Posted by Skate Guard Blog at May 12, 2013
Email ThisBlogThis!Share to TwitterShare to FacebookShare to Pinterest
Newer Post Older Post Home