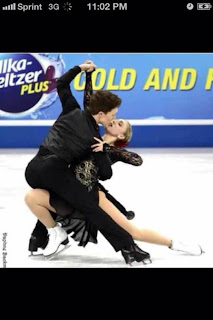 After only teaming up in 2012, Tory Patsis and Joe Johnson very quickly developed their skating and qualified for their first U.S. National Championships by finishing 2nd in novice dance at the 2013 Midwestern Sectional Championships. Going on to compete at the 2013 U.S. National Figure Skating Championships in the novice dance category, they delivered strong performances, finishing 1st in the pattern dances and finishing 2nd overall and winning the silver medal overall in their debut. The Illinois and Colorado natives look forward to a long career together, and it was my pleasure to have a chance to speak to them about their debut season, plans for the future, training and more!

Q: You earned the silver medal at the 2013 U.S. Figure Skating Championships in the novice dance category. What did this accomplishment mean to you?

A from Joe: Getting the silver medal was amazing! Since it was not only our first nationals together but each of our first nationals individually, we had no idea what was going to happen. It absolutely made all those months of hard work and uncertainty worth it, and it solidified our trust in each other. Definitely the perfect end to the season/start to nationals week and our partnership.

Q: At U.S. nationals, you won the pattern dances and finished second in the free dance portion of the competition. Which is more interesting to you - pattern dances or free dances, and is competing in a short dance as opposed to a pattern dance more or less appealing?

A from Joe: Last season I would say we probably found pattern dances a bit more enjoyable, just because of our short time together. This season, the free dance is coming together a lot more smoothly, but as we were still feeling out simple little partnering quirks and skating styles, pattern dances were something consistent to fall back on because there is more of a strict right and a wrong way to do them, and it's easier to assess where mistakes are being made. We love the short dance though! Incorporating difficult transitions between pattern dances and including lifts and elements from other ballroom styles has definitely upped the entertainment value.


Q: You have been training together for less than a year. Why do you think you two have "gelled" so quickly?

A from Joe: I think we gelled so quickly because we both wanted the same things and were willing to do whatever work necessary to achieve our goals. When Tory came out in June of last year, our goal was just to put out something respectable at Lake Placid, but after seeing that we compete well together we decided to aim for good placement nationally at Novice and get assigned to compete on Team USA this year.

Q: How did you first come to team up as a dance team and what have been the biggest obstacles in getting to this point with your skating?

A from Joe: We first teamed up based on having seen Tory in person out here for a different tryout that didn't pan out, and asking her out again. Our biggest obstacle as a team was getting used to each other's very different skating styles. About three months in (after many knees to the soft spot, elbows to the face, and tripping each other) we started to understand each other's skating much better.

Q: Are you familiar with Dancing On Ice and do you think the U.S. could benefit from a similar televised show?

A from Joe: Yes, we're familiar with Dancing on Ice! It's a shame there's not something similar in America. It's very entertaining and would no doubt help increase the sport's popularity to a wider range of fans who would otherwise not be interested in figure skating. We are privileged to work with Christopher Dean here in the Springs, who is one of the creative directors on the show.

Q: What specific areas are you focusing on when it comes to your training right now and have you started working on new programs for next season as of yet? Do you plan on competing as novices or juniors next season?

A from Joe: Our training for the last few months has been covering lost ground on the basics we didn't get to work in our first season. Basic line and unison exercises took up a lot of our ice time. Recently though we've been doing mostly program work and starting to build some cardio endurance for competition month. We have a new free dance and the short is complete, and we're competing them as juniors in hopes of assignment.

Q: Looking forward to the 2018 Winter Olympic Games in Pyeongchang, Korea, what are the three things you both need to do to be in line to be competitive on the senior level in the future?

A from Joe: Absolutely, we're looking forward to 2018! The Olympics is a long way away, and there's so much to do between now and then. The three most important would probably be work on consistency in competition, train in many dance styles to become better performers, and of course get stronger physically and mentally to develop the confidence one would need in the high senior ranks.

Q: What ice dance teams (past or present) do you most look up to or idolize?

A from Joe: Not to kill a cliché, but probably our two biggest idols as teams are Davis and White and Torvill and Dean. Both have set such high standards for what it means to be the best, and have been so innovative in moving ice dance forward in their respective times. They're perfect examples of where hard work and genuine dedication can take you if you stay the course.

Q: Who are your favourite musical artists and if you could skate to one song by them, what would it be?

A from Tory: My favourite musical artist would have to be Michael Buble. This is not an artist used much in the skating world, but if I could skate to one song by him I would choose "Hallelujah".

A from Joe: I'm a huge classical music guy. If it wasn't for the restriction in ice dance on needing a set rhythm, I'd love to skate to soundtracks from "Cinema Paradiso".

Q: What are the main differences, in your opinion, between pairs skating and ice dancing. Which is harder?

A from Joe: The biggest and most obvious difference between ice dance and pairs is that one has jumps and once doesn't. Overhead lifts and side by side spins are not allowed in dance either. As for which one is harder... I know I personally couldn't do what they do. The explosive strength needed to throw someone into a triple twist, the synchronizing of anything that isn't side by side twizzles, and death spirals are all so tough. I wouldn't go saying pairs is harder though. Just because a sport isn't acrobatic doesn't decrease its difficulty. Dance is a performance beginning to end, and elements aren't so much a display of athleticism so much integrated as part of the transitional work. There's no break in character or flow, and in a good program there's no obvious "breathing section". I don't know many pair skaters who could do dance, and vice versa. In the end, I'd say it's apples and oranges.

A from Tory: In my opinion, the main differences between pair skating and dance are the way we perform. I think dance has a more theatrical aspect to it while pairs is more go go go... and athletic looking. I think they are equally difficult, both of them have their difficulties. For example, pair lifts are sustained making both the woman and man in the relationship to be both equally stable and strong. Dance lifts are more movement oriented. I feel both partners have to be equally strong too, but the boy has more of a job maneuvering the woman in dance lifts.

Q: How does figure skating bring joy into your lives?

A from Tory: Figure skating is a sport that not many people can do. It is a lot of hard work and dedication. Figure skating brings joy to me because I know each day I go to practice I can learn and do something new and different. The moves I learn on the ice are so abnormal to a normal person's body that I think its cool I can do them. Skating and gliding on the ice just makes me smile and brightens my days.

A from Joe: Figure skating brings joy into my life because the ice is the one place where how I feel and how I move are one and the same. It's such a great way to express oneself, and to improve one's character. I've learned so much about life and what kind of challenges I can deal with, all the while having the freedom of movement skating allows me. I can't picture myself doing anything else.

If you enjoyed the interview with Tory and Joe, stay tuned to http://www.facebook.com/SkateGuard and http://skateguard1.blogspot.ca for more skater interviews as well as articles, commentary and special features! You can also follow me on the Twitter at http://twitter.com/SkateGuardBlog for skating tweets and whatever else I've got on the go!

Posted by Skate Guard Blog at May 25, 2013
Email ThisBlogThis!Share to TwitterShare to FacebookShare to Pinterest
Newer Post Older Post Home
"As a rule an author has one or two popular ways of contrasting the past with the present. He can treat the past as lying in comparative doleful ignorance, or he can explain that the past was infinitely superior to the day we live in. Of course, either method is the popular journalism of the moment, and in reality there is no sharp contrast, but a gradual transition which leads the past into the present." - Joel B. Liberman, Skating Club Of New York