Three Cheers For Dick: Why Dick Button Should Be The Next ISU President 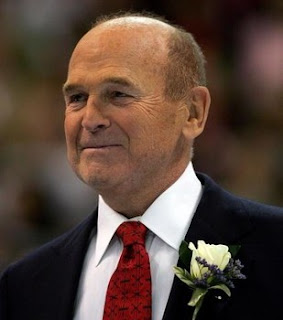 In a perfect world, figure skating would always be fun, we'd always agree with the results and the International Skating Union would be run by someone with a sense of humor, a knowledge of what WORKS in figure skating and how the sport should be judged, presented and organized behind the scenes. If you have read my blog entry "What Really Grinds My Gears? Ottavio Cinquanta, The ISU And The CoP/IJS Scoring System", you have an idea about how I feel about Cinquanta's leadership and the new judging system. As far as I'm concerned, the sport needs a makeover and who better could you find to do it than famed skating commentator, professional competition organizer and 2 time Olympic Gold Medallist Dick Button? I adore Dick so much that I'm offering the top 12.0 reasons (that's 2 6.0's - one for technical merit and one for artistic expression) - why Dick should rule the ISU roost:

1. He is not only knowledgeable but absolutely hilarious.

2. He could commentate every single event and have his commentary play a role in the judging. If he announced on air that someone had performed a "first rate triple toe walley" and the judges actually identified and scored it as a double flip, he could just ream them out on air and be like "I'm sorry, judge #2, but if you'll recall in my commentary of that superb free skate, I not only pointed out that skater's fine free leg, but also complimented their triple toe walley". If the judge rebutted him and argued the skater had actually done a double flip, he could just get Peggy to back him up. I think it's a fabulous idea. He has good taste.

3. Lucinda Ruh could make a comeback and he could say "Good for you, Lucinda Ruh" again.

4. The "Pirates Of The Caribbean" soundtrack could be mandatory short program/short dance music for his first season as ISU president just so he could say "look at the swash in that swashbuckling" again (and on a regular basis). As a result, Alena Leonova would be forced to bring back her "Pirates Of The Caribbean" short program and mop the floor with those other Russian jumping beans that get right on my last gay nerve, like that Adelina Sotnikova one who skated to Christina Aguilera screeching like a dying seal for five minutes. But that's a whole different blog entry in the making...

5. He is pretty much single handedly responsible for competitive professional figure skating becoming a 'thing', and would probably be all for having judging panels consisting of past skaters and knowledgeable coaches and referees of the sport. You just know he'd be all for vocal music and creativity too. Imagine! What a concept, girl. But why have vocals in singles skating when someone could skate to the freaking "Dr. Zhivago" soundtrack again? That'll sure bring in the ratings.

6. The need to remember skaters names would be absolutely pointless. Everyone could just be called "this young man" or "this young lady".

7. No other ISU president would ever say ""if that doesn't put a fanizzle in her shanizzle nothing else will" on network television.

8. Crooked judges could be accused of "bamboozling" and stricken from the record. He wouldn't be having any of that tomfoolery.

9. If a skater cheated, flutzed or underrated a jump, he could have them stop the music, get on the PA and matter of factly say "whatever that was supposed to be, it wasn't" then march down to the ice and give them a long lecture on why they should be doing a first rate double instead.

10. He could get rid of "positive and negative GOE" (grades of execution, for those of you who humor the Cop/IJS system) in the scoring of elements and replace them with a new system that calls out poorly executed elements as "sloppy" and reward well performed elements by calling them "first rate, first rate".  In skater interviews, skaters could explain that "that quad/triple combination set the tone for the program, but it was that first rate layback spin that won it for me".

11. If he disliked a skater's program, he could just march right up to the choreographers and tell them he didn't give a "rusty hoot" who told them another "Carmen" program was a good idea, but he wasn't having it.

12. Every program would contain at least 5 layback spins and you better believe he'd be watching closely. If he didn't feel 5 was enough, he could always add a whole other round of competition specifically devoted to layback spins.

If that's not enough, there are these videos:

To make a long story short (too late), you can't change the sport without a sense of humor, and no one has a better one and more knowledge about the sport than this man, who has watched it grow for almost 100 years and seen every up, down, success story and tragedy. He's lived through World War II, the plane crash that took the lives of a whole generation of U.S. figure skaters, invented the flying camel spin, was the first person to land the double axel or a triple jump in competition, commentated skating for decades, made history countless times over and brought smiles to our faces time and time again. I say the figure skating world talks him into turning the figure skating world on it's head. After all, we all need a little more Dick in our lives, wouldn't you say?


Stay tuned to http://www.facebook.com/SkateGuard and http://skateguard1.blogspot.ca for skater interviews as well as articles, commentary and special features! You can also follow me on the Twitter at http://twitter.com/SkateGuardBlog for skating tweets and whatever else I've got on the go!

Posted by Skate Guard Blog at May 12, 2013
Email ThisBlogThis!Share to TwitterShare to FacebookShare to Pinterest
Newer Post Older Post Home
"As a rule an author has one or two popular ways of contrasting the past with the present. He can treat the past as lying in comparative doleful ignorance, or he can explain that the past was infinitely superior to the day we live in. Of course, either method is the popular journalism of the moment, and in reality there is no sharp contrast, but a gradual transition which leads the past into the present." - Joel B. Liberman, Skating Club Of New York