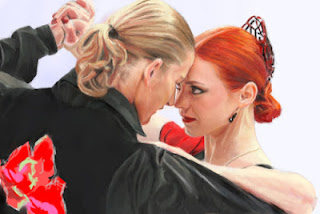 Who doesn't love a good comeback story? Previously in my blog article Come Back, Come Back, Whoever You Are, I looked at 6.0 of  the most significant comebacks in the sport's history and after reading today of a very interesting comeback story today I felt a need to share my 2 cents. In an interview on the Russia 2 program "Great Sport", 2002 Olympic Gold Medallist Marina Anisinna appeared with her husband Nikita Djigurda to discuss a possible return to ISU competition in time for the Sochi Olympics.

Social media and online figure skating message boards have been abuzz today with this story, decrying the former Olympic and World Champion for her potential decision and calling the announcement out as a political manoeuvre and publicity stunt. One skating fan on the popular message board Figure Skating Universe joked that "the Russian federation might as well ask Pasha back, I bet she could still outskate most of these girls." According to translations of the interview, FFSG president Didier Gailhaguet asked Anisinna and her partner Gwendal Peizerat to return to competition following Nathalie Pechalat and Fabian Bourzat's disappointing (and in my opinion, messed up) 6th place finish at the 2013 World Figure Skating Championships in London, Ontario. According to Anisinna's husband, Gailhaguet apparently stated that he and the team will negotiate regarding a contract, financial considerations and a final decision season. Anisinna, who has never competed under the new IJS/CoP system stated that she's unafraid of the new system but as she's a mother of 2, it would be a big change. Strangely, there doesn't even seem to be any mention as to whether or not Gwendal Peizerat has even agreed to or commented on this potential comeback. He is currently involved in politics in France's Rhône-Alpes region.

As for a comeback, it's not really as ridiculous as people are making it out to be in my opinion but after over ten years away from ISU competition, it would certainly be a stretch. The only skater that comes immediately to mind who have made comebacks after that long away from high level competition are Elaine Zayak, who returned to competition in 1994 after retiring from eligible competition in 1984. Skaters have certainly comeback after shorter periods away from the sport with varying success. And you have to look at someone like Evgeni Plushenko, who also competed in Salt Lake City and plans to be in Sochi as well but is recovering from injury and surgery and isn't to my knowledge even jumping again yet. If he's at that stage, if this comeback is for real, Marina and Gwendal would need to get cracking pretty damn soon. Learning two new programs that are constructed in a completely different way and would involve some pretty complex footwork would be HUGE and if they were to start soon and do this, they'd pretty much have to neglect everything until the Olympic Games to get their twizzles and choctaws in order.

Former competitors of the French skating diva didn't really have anything nice to say. Nikolai Morozov, who choreographed for Anisinna and Peizerat's long time rivals Barbara Fusar-Poli and Maurizio Margaglio, said "the statement is shocking. I don't even know how to comment that. However, I am certain this comeback is impossible." 1993 World Champion and prominent coach and choreographer Alexander Zhulin said: "Guess I should come back as well then. I'll start practicing immediately. On a more serious note it's a nonsense and as much as I like Marina I'm quite sure she will not come back. Hypothetically? I can't even imagine where she would be placed. Very low! The comeback is a bad idea, we should remember Marina as she was." Ilya Averbukh, who narrowly lost out an Olympic gold medal with partner Irina Lobatcheva in 2002 in a 5-4 split to Anisinna and Peizerat commented "I can only call it an idiotic PR that someone not too smart came up with. It's a joke and it's a shame Marina Anisinna allows her name to be trashed going so low, anyone in their right mind will tell such a comeback is impossible."

Although I certainly wouldn't be so harsh and would personally love to see them return, I don't want to see it be at the expense of Pechalat and Bourzat - who I really enjoy. They're a talented team who have been putting together some good material for next season, including a free dance inspired by "Le Petit Prince" choreographed by Julien Cottereau. Didier Gailhaguet and the FFSG have been rich in controversy and political head games for years, long before the 2002 Salt Lake City judging scandal and since as well. His notorious treatment of certain skaters who were either not in his or the international judges favour is certainly well rumoured and I sincerely hope that this isn't a publicity stunt. It's only going to make him look even sillier than he already does. Unfortunately, it's going to make Marina (and Gwendal, by association) look just as silly.
Posted by Skate Guard Blog at June 16, 2013
Email ThisBlogThis!Share to TwitterShare to FacebookShare to Pinterest
Newer Post Older Post Home