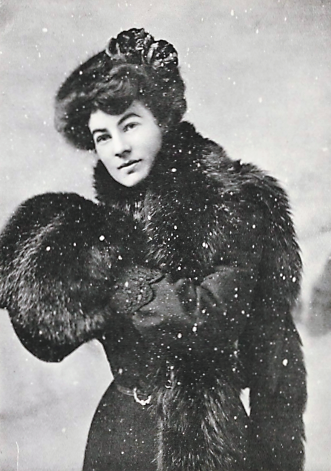 Long before Yuna Kim landed a triple Lutz/triple toe combination, before Michelle Kwan mesmerized audiences with her interpretation of the music of Eva Cassidy; long before Katarina Witt, Dorothy Hamill, Janet Lynn, even Sonja Henie, came a woman who single handledly changed ladies figure skating as we know it with her determination and pioneering spirit. The very first woman to strike Olympic gold in figure skating was also the very first woman to compete in an ISU Championship.

Florence Madeline 'Madge' Syers changed the course of history in 1902, when she bravely entered the world of competitive figure skating, competing against the men and winning the silver medal behind Ulrich Salchow, who ironically stands alongside Madge in the record books as the first men's Olympic gold medallist in 1908. 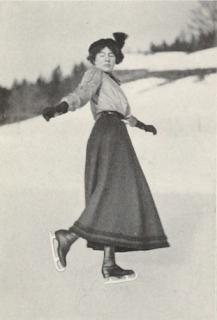 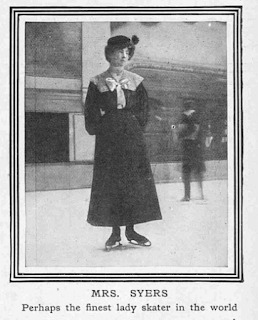 Madge was one of fifteen children of a disgraced and bankrupt property developer from Kensington and was a distinguished swimmer and equestrian before taking up the sport of figure skating. She was introduced to the less rigid Continental Style made famous by skating pioneer Jackson Haines by her future coach, husband and pairs partner Edgar Morris Wood Syers when she was but a teenager. In 1899, the couple married and began competing both individually and as a pairs team. They wrote their first two books about the sport together, one of them instructional and the other a volume of poetry. 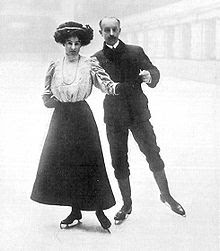 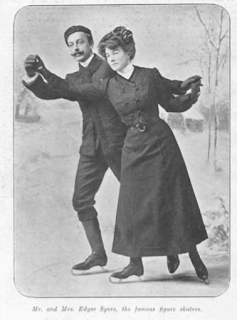 Discovering that the ISU's rules did not specify the gender of the participants, her 1902 trip to the World Championships would not have happened without the urging of her husband and coach Edgar. Officials were surprised by Madge's grand entrance to a sport dominated by men but her skating ability spoke for itself. Helping her cause was the fact that Edgar and Madge were influential members of Great Britain's National Skating Association, the hosts of the 1902 World Championships. 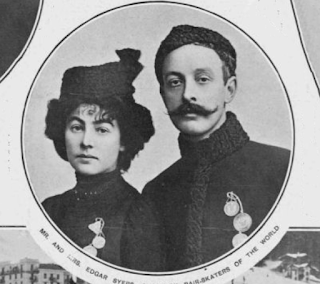 Dressed to the nines in a full length skirt, satin blouse, pearl necklace, hat and leather gloves, Madge took on three men and was only topped by one, the eventual ten time World Champion Ulrich Salchow. As the legend goes, Salchow apparently presented Madge with his gold medal. What you have to keep in mind about all of this is that although the women's suffrage moment was alive and well in Great Britain at the time, it wasn't until 1928 that the Representation Of The People Act was passed, allowing all women over the age of twenty one in the United Kingdom to vote was passed. The first large procession or demonstration by the National Union Of Women's Suffrage Societies wasn't held until 1907, so that certainly gives you an idea as to how daring what Madge was doing really was in that time period in her country. 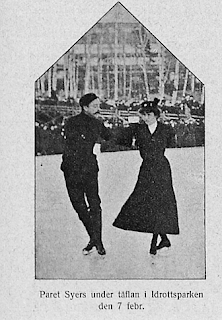 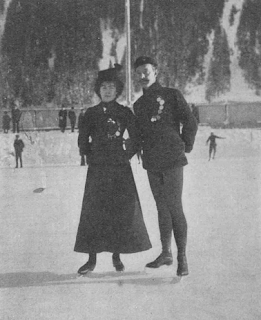 Following her iconic first visit to the 1902 World Figure Skating Championships in London, the ISU was prompted to discuss and debate the topic of women competing against men at their 1903 Congress. The main concerns were that a woman wearing a dress as opposed to pants prevented the judges from seeing the feet, that a judge might judge or favour a woman he was involved with romantically and "it is difficult to compare women with men". In a vote of six to three (all men, of course), the ISU Congress voted in favour of barring women from competition completely. 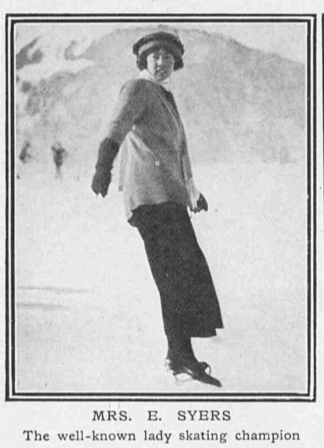 Madge wasn't daunted by this sexist decision though. It only seemed to empower her. She shorted her dresses to a mid-calf length to show her skates fully and dispel that particular concern. In doing so, she started a new fashion trend. By 1988, Katarina Witt took it a step further and only wore a sequined bodysuit decorated in blue ostrich feathers. 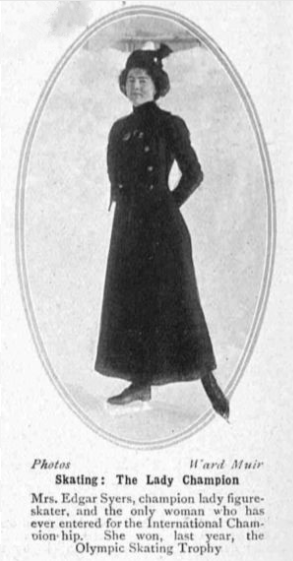 Madge competed elsewhere, winning the 1903 Swedish Challenge Cup against a mixed field. She won again the next year, beating her husband and coach Edgar. She also entered the 1904 European Championships, but was forced to withdraw following the compulsory figures due to injury. Long story short, Madge wasn't going anywhere.

The topic of women in competition was revisited in 1905, and with the lobbying of the National Skating Association things went differently this time. A separate event was created known as "the Ladies' Championship of the ISU" and was held at a different date and location from the men's World Championship. Who else but Madge won the first and second ladies titles, finishing first in Davos in 1906 and Vienna and 1907. These events would later be recognized as World Championships. 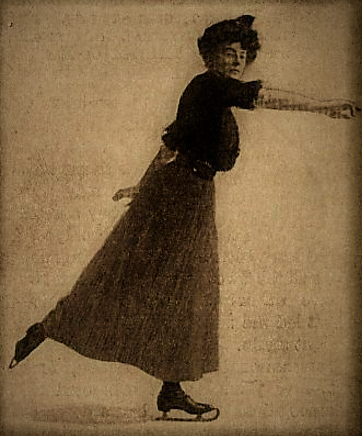 The very first time figure skating was contested at the (Summer) Olympics, Madge was ready and raring to go. The figure skating events were held in London in October 1908 at the Princes Club. She both the compulsory figures and free skating with first place ordinals in both segments from all five judges and became the first Olympic ladies champion. Official reports described her as "in a class all by herself" and as having "excelled in rhythm and time-keeping, and her dance steps, pirouettes" and also stating that "the wonderful accuracy of her figures, combined with perfect carriage and movement, was the chief feature of the morning's skating." Remarkably, her very well received skating in the singles event was coupled by a bronze medal in pairs skating with her husband Edgar. 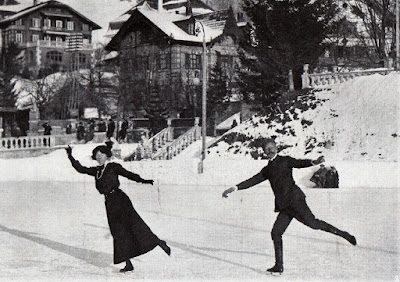 Not long after the 1908 Summer Olympic Games, Madge retired from competitive figure skating due to her failing health. Madge and Edgar co-wrote a third and more influential book, "The Art Of Skating (International Style)", which was published in 1913. Conflicting contemporary sources alternately claim she died of heart failure caused by acute endocarditis or that she died while giving birth. What we do know with certainty is that her date of death was September 9, 1917 and she was only thirty five at the time. She was survived by her husband, who passed away in 1946 at the age of eighty two. He lovingly penned the poem "To My Lady's Skates": "The praise of glove, of fan, or shoe, full many a ode relates; May not my muse, with theme more new, Commend my Lady's Skates? Eff little feet to guide these blades My Mistress fair provides; And, sweetest of our glacial maids, On them serenely glides." 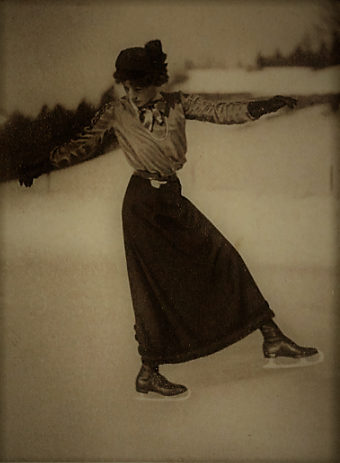 Posthumously, Madge was inducted to the World Figure Skating Hall Of Fame in 1981. We can't look at where we are without looking back at skaters like Madge who changed the face of the sport as we know it. Just as times were so very different then, they are so different now from how they were even 20 years ago. In 1993, who would have predicted the IJS system, the rise of social media, YouTube, the complete eradication of professional figure skating competitions, multiple quad jumps in one program... times have changed and they will continue to but one thing that has been consistent throughout the history of the sport has been change, and Madge made one of the first and most instrumental ones.

Skate Guard is a blog dedicated to preserving the rich, colourful and fascinating history of figure skating and archives hundreds of compelling features and interviews in a searchable format for readers worldwide. Though there never has been nor will there be a charge for access to these resources, you taking the time to 'like' on the blog's Facebook page at http://www.facebook.com/SkateGuard would be so very much appreciated. Already 'liking'? Consider sharing this feature for others via social media. It would make all the difference in the blog reaching a wider audience. Have a question or comment regarding anything you have read here or have a suggestion for a topic related to figure skating history you would like to see covered? I'd love to hear from you! Learn the many ways you can reach out at http://skateguard1.blogspot.ca/p/contact.html.
Posted by Skate Guard Blog at June 07, 2013
Email ThisBlogThis!Share to TwitterShare to FacebookShare to Pinterest
Newer Post Older Post Home