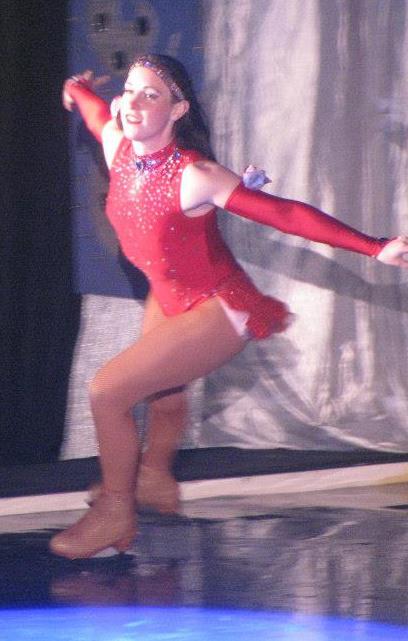 Born in Red Bank, New Jersey, Stephanie Roth is the kind of skater who always marched to the beat of her own drum (which of course, I love!). Representing the Skating Club Of New York during her eligible career, she made five trips to the U.S. National Championships and is a former North Atlantic Regional Champion and U.S. Collegiate National Champion. Since ending her eligible career, she has been skating professionally - performing with Royal Caribbean cruise ships, Rosstyn Ice Shows and Rink Designs and Woodstock Ice Productions in addition to coaching. Most recently, she has put her choreography out there in Young Artists Showcase 4 (#MKYAS4 if you're on the Twitter). For more information on YAS, visit http://youngartistsshowcase.net/. It was my pleasure to talk to Stephanie about her skating career, YAS4 and her thoughts on choreography:

Q: You competed on an elite level for many years in the U.S., appearing 5 times at the U.S. National Championships. What are your favourite memories from your competitive skating days?

A: My favourite memory was actually my last Easterns in 2008. I had gone to World University Games the year before and skated really great, but being in Italy I wasn't really able to share that with the skating family I had made over my 17 years of qualifying events and my long wasn't even filmed. I wanted that one great moment in front of a crowd who knew me and knew how long I pushed through in competitions. So, I competed one more year with just the hopes of making Easterns because the East Coast was stacked that year. I think somewhere around 9 or 10 girls had gone to Nationals or been on Team USA the year before. I was just happy to be there, I felt great, I had choreographed and been in love with both my programs and just knew it was going to be great memories. I ended up skating 2 of the best programs of my life and actually couldn't get off the ice before I started bawling my eyes out. I wasn't even expecting to make Nationals because the group was so tough, but what everyone lacked was 2 great programs. I was able to sneak in because of my consistency and not only that, I was the by far the oldest competitor at a week shy of my 25th birthday, so that was pretty awesome!

Q: In deciding to skate professionally, what have been both the most scary and rewarding parts of making that decision and living it out?

A: I think the most rewarding part has been the ability to experience skating through a new atmosphere. It's a different type of pressure, but it's a different type of appreciation as well. I worked on cruise ships at first, and some people were seeing a live show for the first time and were just astonished that we could stand up let alone jump and spin. I've also been able to make life long friends and learn new styles of skating I never thought I'd be capable of performing. That last part, the new styles, was equally the scariest. There were a few solos that were entirely out of my normal realm of ability or even preference, but it was my solo and I had to learn it and master it. Some of them took a lot of adjusting, but I did it, because I didn't want to let anyone down.

A: I've always loved choreography (whether it was for me of my students) but I definitely have a style I stick to. I am really hoping to learn more about what I'm capable of by being pushed out of my normal box.

Q: What makes YAS so important to figure skating right now? What can it help do to evolve the sport?

A: YAS is important because it is bringing new choreographers into the spotlight. I competed in a time where there were very few choreographers and their work was so obviously theirs. It's not that the work was bad, it was just stereotypical. Now I'm seeing so many different "artists" and that's what a choreographer has really become. The numbers are our masterpieces drawn from many more mediums from inspiration and it's really playing right into the IJS with the separate marks for not only choreography, but interpretation.

A: The most fun for me is creating a storyline to act out though the piece. I find you can draw your movement from how you would be acting. The most challenging for me is I tend to get repetitive with some moves, I find something I like and I marry it to that program, I have to stop and be like, no you've done this enough, go about it a different way! I sometimes also just go on autopilot and forget what I just did, so I've taken to filming myself so I remember what I liked and didn't!

Q: If you were to create an original piece of choreography for any 3 skaters in the world, who would they be, what would the piece be about and what would you choose as your music and costumes for the skaters?

A: Anyone that knows me knows that I am basically a punk rocker and have an instant gravitation towards any skater that can relate to me music wise. I grew up training with Shaun Rogers and I met Colleen Maguire and Josiah Modes through Royal Caribbean and I would love to put a number together for them. The piece would be edgy and unconventional and I'd like to make it like a mock audience at a rock show with mosh style choreography, big leaps, crazy lifts, throws, and flips and would have to set to something fast, maybe a little offensive, I'm gonna have to say American Idiot by Green Day.

A: I grew up working with the Ice Theatre of New York and really anyone that has been at the helm of that program has brought amazing things to the skating world. I admire that program because instead of being at the elite somewhat unreachable level, their performances are all over the city and consist of all different types of skaters who have had different careers. It takes a certain something to be an ITNY performer, but it's a different something than we see in out elite athletes. I like that their program acknowledges that skating isn't all about the big tricks

A: Hmm... I guess that I have 16 tattoos! It's also kind of my dream to choreograph a rock n' roll on ice show! I've always been this oddball skater, I grew up competing against the baby ballerinas, being their age, but 5'8 kinda put me in my own outcast league which was fine, because I was the girl backstage listening to punk rock and metal to get ready to compete while most of the skaters were into whatever big pop sensation was the thing. And ya know what? I made it my own way and I want skating to embrace the oddball...if they're talented, why should it matter?!

A: My favourite book would be Bloodsucking Fiends by Christopher Moore and I can't believe I have to pick just one song! I will have to go with a tie...The Devil in Stitches by Bad Religion and The Nerds, The Freaks, and The Romantics by the Bouncing Souls.

A: Unconventional. Like I said before, my first trips to Nationals were in the baby ballerina era. I skated to dark movie themed music like Pirates, Batman, and Once Upon a Time in Mexico. I was determined to make my goals my own way and people to this day still talk to me about how powerful I was and I revel in it. I don't think skating needs to fit in a pretty little box with a pink ribbon anymore...there's nothing wrong with glitter, but I think that glitter can be intertwined with studs.

Skate Guard is a blog dedicated to preserving the rich, colourful and fascinating history of figure skating and archives hundreds of compelling features and interviews in a searchable format for readers worldwide. Though there never has been nor will there be a charge for access to these resources, you taking the time to 'like' on the blog's Facebook page at http://www.facebook.com/SkateGuard would be so very much appreciated. Already 'liking'? Consider sharing this feature for others via social media. It would make all the difference in the blog reaching a wider audience. Have a question or comment regarding anything you have read here or have a suggestion for a topic related to figure skating history you would like to see covered? I'd love to hear from you! Learn the many ways you can reach out at http://skateguard1.blogspot.ca/p/contact.html.
Posted by Skate Guard Blog at August 16, 2013
Email ThisBlogThis!Share to TwitterShare to FacebookShare to Pinterest
Newer Post Older Post Home