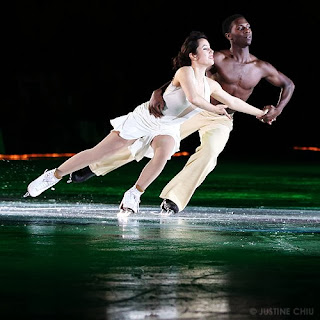 Canada has produced some of the best ice dancers that the world has seen... from Tracy Wilson and Rob McCall, Shae-Lynn Bourne and Victor Kraatz to the reigning Olympic Gold Medallists Tessa Virtue and Scott Moir. Like in the U.S. right now though, Canada has an extreme depth to its ice dancing field. One team that's in that top group of skaters vying for a trip to Sochi is Kharis Ralph and Asher Hill. In three consecutive years, they won the national Pre-Novice, Novice and Junior titles and went on to compete at the 2008 World Junior Championships in Sofia, Bulgaria where they placed in the top ten. Since then, they have competed on the Grand Prix circuit and at the Four Continents and World Championships. Skating from everything from traditional African folk music to Gershwin, Michael Jackson and Freddie Mercury, Ralph and Hill have proved not only to be a strong team technically but a standout team artistically as well, a team unafraid of taking risks choreographically. For the last five seasons, they have ranked in the top 5 in Canada as Senior ice dancers and they hope to make the jump to the podium this season. It was my absolute pleasure to chat with Asher about the changes they've made to their training during this Olympic year, traveling around the world, the 2010 Winter Olympics and much more. You'll love his wonderful sense of humour!:

Q: With your partner Kharis Ralph, you won the 2008 Canadian junior title and have gone on to represent Canada internationally at the World Championships, Four Continents Championships, the Junior World Championships and both junior and senior Grand Prix events. What are your proudest or special moments from your competitive career?

A: I have been so fortunate to be able to travel around the globe and represent my country! There have been so many great moments through out our skating career. For me, Worlds in Nice was definitely a huge highlight. Mostly because as a child I always imagined myself being called on to ice at a World Championships and hearing the announcer say "Representing Canada". It still gives me so much pride and happiness. Also, competing in both Korea and Japan for the Junior Grand Prix Final was a pretty awesome experience as well.

Q: With your program choices, you always seem to go in unconventional directions, choosing African folk music and Freddy Mercury's music (for instance) within recent years. How do you and Kharis select your music and how involved are you in the choreographic process?

A: Well, Kharis and I are both very involved with the music selection. We pretty much just pitch a genre we may want to do for each year and just start the grueling process of music research. We do, although, make sure to keep a completely open mind to any music that may peak our interest, even if its not in the particular area we were thinking. For example, this year 3 days before we went for choreography we decided to do a complete 180 with the music. We were literally choosing music as we were choreographing with Julie Marcotte and it made the process really fun and completely different. This year for our free dance, we went to Montreal to work with Julie. She really involved us in the process and really worked with our emotions and feel for the music. Because she hasn't worked with us, she didn't know our limitations and just had fun with us. It was amazing and I would love to work with her again.

Q: You have placed in the top five in the senior level for the last five years at the Canadian National Championships. What are your goals for this season and what improvements have you made in your skating to try to reach the podium this season?

A: Getting a medal at Nationals has been our goal for the past few seasons. It always escapes us. This year, we are really pushing ourselves to get that medal and a trip to the Olympics. Trying to compete as much as possible, we started working with our ballroom coach as soon the program was finished. We are leaving no stone unturned. For me, I really wanted to work on improving the way I deal with things emotionally and try and as many negatives into positives as possible. We have such strong teams here in Canada so it not to going to be easy, but I have faith in our ability. All we can do is put our best foot forward everyday and improve in every little way possible.

Q: Who are your three favourite skaters of all time?

A: My three favourite? That's really tough... Daisuke Takahashi, Tessa and Scott, and Pang and Tong. There way too many skaters but thats all that came to mind.

Q: How would you describe your ultimate 'day off' away from the ice? What would you do and where would you go?

A: Day off? WHAT DOES THAT MEAN!? I am not quite acquainted with that term. In this metaphorical world of days off I guess it would involve a nice sleep in followed by a nice big breakfast at Cora's. I would get two entrees (one of which must be a raspberry chocolate crepe) then go shopping for a new pair of Converse. I would probably be hungry again so it's Thai food or a huge burger! Then I'll probably go back home, lay in my bed and watch hours of horror movies and cartoons. I am very mature.

Q: Like Alexe Gilles who I also interviewed recently, you have a twin sister! What is your relationship with your twin like?

A: Yes, I have a twin sister. Her name is Acacia. She also used to skate. She competed at the Senior National level in free skating. I was better than her at that as well. My sister and I are very close. Qe were always together waking up in the mornings to go skating. In school, we were always in the same classes (even in high school - we may have abandonment issues!). As little kids, we used to have our own office skating competitions in her giant room. Between the two of us, we would be 20 different competitors. Each program would be at least 9 minutes long! We are still very close and she is very supportive. I know me making the Olympics would be a dream come true for her too.

Q: My sister and I totally did the same thing! Next question... while still competing as an ice dancer, you also competed on a national level (Novice and Junior) as a singles skater. Do you still enjoy singles skating and how hard was making the transition from doing both singles and dance to focusing on one discipline solely?

A: Looking back to when I did both disciplines... I could hardly believe it. The hours spent inside an ice rink were crazy but I loved doing it. I still love free skating because you have freedom of movement and you can make up things on the fly without affecting someone else. In fact, I actually competed last Februrary for my University at the OUACs in singles. I almost died doing a four minute program, but I had a great time. Focusing on one discipline wasn't hard at all. The hardest part was trying to figure out what to do with my spare time in the afternoon, but that void was soon filled with school.

Q: Who do you think are the greatest musicians of all time?

A: Is being black interesting? I do think its interesting to be a black figure skater. There aren't many of us in the sport so I do like to celebrate it! In terms of something people may not know about me, I have a really great memory but I can never remember names. I remember how I met you, the direction of the wind, and if Mercury was in retrograde... but when it comes to names I will always forget! I am also a cartoon fanatic (especially X-Men original 90's series and South Park). In short, I am a nerd.


Q: What have you learned most from competing internationally and what has been the strangest or most interesting thing you've seen in your travels worldwide?

A: Competing around the world has taught me to perform under pressure under any conditions and gave me a glimpse into different cultures. As for the craziest thing I have ever seen in my travel I think the Pearl Market in China was just insanely crazy - so much awesomeness in one building! I realized I am super good at haggling. Also the shopping districts in Japan blew my mind and also how progressive yet so in touch with older culture they were. The other stuff is completely classified... hahaha.

Q: What are your long term goals or plans in life and in the sport?

A: As for life, I have no idea really. I'm working on getting my coaching levels and finishing my degree. I would love to stay involved with the sport and maybe become a choreographer. We'll see where life takes me.

If you enjoyed my interview with Asher, "like" this blog on Facebook at http://www.facebook.com/SkateGuard for all of the new interviews and writing as they get posted, pictures and news from the skating world and lots of great videos! You can also give me a follow on the Twitter at http://twitter.com/SkateGuardBlog.
Posted by Skate Guard Blog at September 21, 2013
Email ThisBlogThis!Share to TwitterShare to FacebookShare to Pinterest
Newer Post Older Post Home