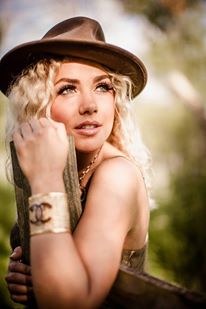 Anyone who's ever heard a wonderful song, read a great book or watched an amazing play knows that when you see someone with a really and natural special talent, there's just no denying it. Before watching this season of Young Artists Showcase, I wasn't familiar with Madeline Stammen or her work. In a class of its own in the Grassroots Division of the competition, Madeline showed not only her command and musicality but her ability to choreograph fresh, interesting new pieces for other skaters. A definite star of the choreography and skating worlds in the future, it was my absolute pleasure to get to know Madeline a little better in this interview:

Q: You have a background in competing yourself. What can you tell us about your "amateur" skating career and what is your favourite memory from your competitive skating days?

A: I began competitive skating when I started working with my lifelong coach, Candice Brown Burek, at the age of eight. Although I adored competing, I was unfortunately plagued with numerous ankle injuries throughout my competitive seasons that prevented me from participating in multiple competitions many years in a row. As my mother always says, God finds a way to turn crappy things into blessings, and because of my injuries I was able to develop my spins, artistry, and skating skills at an early age.  I'd have to say one of my favourite skating memory in the competitive days was performing in Colorado Springs at the World Arena in the summers. The surround stadium was incredible and invigorating, and the Figure Skating Hall of Fame was right around the corner. In a place like that, you are engulfed in skating history wherever you go, and I always came home inspired and ready to work for the next competition!

Q: In deciding to skate professionally on Royal Caribbean cruise ships, what have been both the most scary and rewarding parts of making that decision and living it out?

A: When I was assigned my first professional show, I was barely legal and fresh out of high school. Most kids my age were being shipped off to school, and I shipped myself off to... well, a ship. This was extremely scary in itself, because not attending college right away seems to be an abomination to kids my age these days, and it's never easy to go against the crowd. I was choosing a unique path compared to my piers, blindly committing to a seven month contract and living in the middle of the ocean... but to be honest, that was a cakewalk compared to the infamous quick changes in shows! I swear, you don't know fear, or pain, until you've zipped up a chunk of your inner thigh! Jokes aside, I have to say that there is no better reward than the feeling of seeing a crowd jump to their feet. That is when I know I chose the right path.

A: My coaches had always told me I should participate in YAS back when I was competing, but I didn't give it serious thought until I came home from my first show contract and began working with Jodi Porter's American Ice Theatre. Many of Jodi's students had participated in YAS in the past (as well as this year!), and they couldn't stop talking about what an amazing experience it was, and how much they grew as choreographers through this experience. I had to have a piece of it!

A: What can it help do to evolve the sport? A choreographer provides a framework, movement, pattern .... ) When done right, choreographers withhold the key to what it takes to not only make the skater a champion, but to modernize the sport of figure skating. The future of figure skating relies on the hands of the choreographer, their work is what is showcased to the world, and that is why competitions like YAS are so important, because it highlights and encourages new and creative works within the artistry of skating, rather than simply glorifying how many rotations you can spin in the air. We all know skating as a sport, but it is unique in that it is an art form as well, and YAS is only going to amplify the art of skating as it continues to grow through the years.

A: Creating something from a great piece of music has to be the most fun for me. I pretty much listen to every genre you could think of, and each time I hear an interesting song, some sort of skating program is always buzzing through my head. I'd have to say the most challenging part of creating is starting the piece in the first place; sometimes there are so many ideas rushing through my mind, that it is hard to stick with one particular movement that I like.

A: Personally, Ricky Harris has to be the most inspiring choreographer for me. I wouldn't really know where to begin with all of her accomplishments, but she was the first to do so many things for the sport of figure skating, including putting comedy on ice! As far as skaters go, I have many favourites, but I would have to say Sasha Cohen for her impeccable line and extension.

A: Most people are surprised to find out that I am a honestly pretty big nerd. I love to read and watch any type of movie by Marvel or set in medieval times.

A: Moving onward with my nerdiness, my favourite series of books is called a Song of Ice and Fire (most people know them as Game of Thrones). As for my favourites song, I could never answer that, because it changes every week!

A: Courageous.  In general, I've never been afraid to step outside the lines of the norm. It's actually quite invigorating for me! Live without limits, and you can accomplish and survive through anything with a bit of courage.

Skate Guard is a blog dedicated to preserving the rich, colourful and fascinating history of figure skating and archives hundreds of compelling features and interviews in a searchable format for readers worldwide. Though there never has been nor will there be a charge for access to these resources, you taking the time to 'like' on the blog's Facebook page at http://www.facebook.com/SkateGuard would be so very much appreciated. Already 'liking'? Consider sharing this feature for others via social media. It would make all the difference in the blog reaching a wider audience. Have a question or comment regarding anything you have read here or have a suggestion for a topic related to figure skating history you would like to see covered? I'd love to hear from you! Learn the many ways you can reach out at http://skateguard1.blogspot.ca/p/contact.html.
Posted by Skate Guard Blog at September 16, 2013
Email ThisBlogThis!Share to TwitterShare to FacebookShare to Pinterest
Newer Post Older Post Home