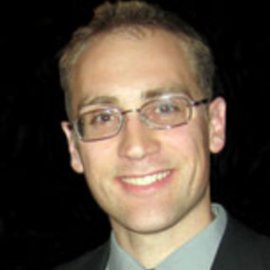 In 2010, Mark Ladwig and his partner Amanda Evora represented the U.S. at the Winter Olympic
Games in Vancouver, British Columbia. Now almost four years later, Mark is retired from competitive figure skating and is a married father who still has a lot of love for a sport he dedicated himself to for almost two decades. His skating career saw him not only compete at the Olympics in 2010, but at 2 World Championships, 3 Four Continents Championships and numerous Grand Prix and international competitions. It was my pleasure to speak to Mark about his competitive skating career, his current career in the sport, fatherhood and more!:

Q:  In your skating career, you have represented the United States at Grand Prix events, the Four Continents Championships, World Championships and at the 2010 Olympics in Vancouver, where you finished within the top ten. Looking back on all of your travels - all of those competitions and experiences - what are your proudest moments? Which were the hardest?

A: I would say the hardest was my first senior Nationals. I put so much pressure on myself and carried it through the whole program like a #45 plate on my back. Compared with the elements I did at the end of my career, it was a piece of cake difficulty wise and yet I made it such a big deal back then. I can remember barely making it through to the end without passing out. I am proudest of every time I did a clean program, in practice or competition. The short at the Olympics was especially sweet - to be on such a stage and skate well, no matter how the judges marked it, I did what I planned and succeeded.

Q: Pairs skating requires you to not only master difficult lifts, twists, throws and death spirals but also to have strong individual skating skills for those side by side jumps and spins. Before you started skating pairs did you ever do singles skating?

A: I skated singles from 1992 to 1999. In 1996, I won the novice short program at Upper Midwest Regionals, by landing my double lutz while others attempted and missed their double axels. That experience taught me that playing to your strengths can make you a champion. I got 6th in the free skate because I carried the pressure of "making it" through the program but I made Sectionals narrowly. I placed dead last, but I really enjoyed it!

Q: I was talking with someone today about social media - Twitter, Facebook - we all use it these days and love it to some extent. There's certainly a dark side to it though and I have been hearing a lot lately about this from skaters. I suppose there's nothing like hate mail at your fingertips. Have you had negative experiences with skating fans and social media, and what are your thoughts on this?

A: I really have not really had a bad social media experience, but I also limit my activity to the salinity of what you would see posted by a business. I do not screen friend requests, but I double and triple think before posting.

A: Paolo Nutini's "New Shoes". It's kind of a theme for life this past couple of years.

Q: In 2006, you got married and in 2009, you welcomed your son into the world. How much did marriage and fatherhood change you as a person and what would you say if your son grew up and told you he wanted to be an Olympic pairs skater?

Q: Responsibilities of the real world, like having a baby who is 100% dependent on you for care, clears your perspective about what is really important. I have known my wife, Janet, since 7th Grade though we didn't date until after high school. Thankfully, she understood about how much I like skating even before we got married. Holden will have to find what makes him happy and I will support him with whatever he aims for in life. My parents did a great job with me and my two siblings, letting us go into what we each love to do. My brothers is an officer in the military, my sister a dentist and I figure skate. We all achieved in our own chosen field and I hope nothing less than for Holden to find what he loves and shoot for excellence, too.

Q: Your partnership with Amanda Evora lasted ten years, which is pretty much unheard of for most pairs teams. What made you work so well together and are you still friends/close?

A: Teams from the past had long partnerships, that was the norm until this past decade. If teams want to be successful they are going to have to stick together. Amanda and I both believed in the goal of making programs that connected with audiences and going out to skate every program to the best of our abilities. We don't see each other like when we trained, especially since I have joined Jackson Ultima Skates as a Technical Rep and I am travelling a lot. We catch up when we can. Usually it's at skating events.

Q: What is one meal you could eat everyday and not get tired of?

A: I love bread and butter. It was my go-to staple in Vancouver at the Olympics and it just always tastes so good.

Q:You're quite active within U.S. Figure Skating and obviously quite knowledgeable about the top skaters in the U.S. right now. If you had to make bets, which skaters currently competing do you perceive as real medal threats for Sochi?

A: As a media labelled 'dark horse' back in 2010, I wouldn't count anyone out to go to Sochi. As Sarah Hughes showed, skate well and you can win the gold.

Q: Having competed under both the 6.0 and IJS systems, which do you prefer and do you think the way the sport is judged and promoted now has helped or hurt the skaters and fans of the sport? If you could change one thing about the way pairs skating is judged under IJS what would it be?

A: I truly wish I owned a time machine. I would go back as the skater I became under the IJS, with all the difficulty and variations, to the 6.0 days to do my program just to see the faces... and then tell them, well in 2014, every team looks that good and better!

A: I can fix, mount, adjust and sharpen your ice skates.

Q: Who, in your opinion, are the three best pairs teams of all time and why?

A: All time? I'm not qualified for that... but here's my favourites: Gordeeva and Grinkov (elegance and the ability to story tell through their programs), Scott and Dulebohn (I saw them over 2 years persevere and it inspired me) and Lyons and Wells (he wasn't the typical physique for pair when compared with those from Europe and I loved watching them on TV as a kid).

Q: When you look back on your skating career and every experience you've had, what did you learn the most from competitive skating?

A: Perseverance. I began in 1999 as a no talent hack with little chance to ever attend U.S. Nationals. I am the sum of hard work, a heavy amount of self critique, a lot of coaching, a ton of love from my family and the full grace of God.

If you enjoyed my interview with Mark, be sure to always check back for more skater interviews and writing about everything under the sun in the skating world. There is also a Facebook page connected to the blog where all blog articles and interviews are shared - as well as current skating news, photos and videos of amazing skating. Give it a "like" at http://www.facebook.com/SkateGuard. You can also follow me on the Twitter at http://twitter.com/SkateGuardBlog. I love talking figure skating and would love to talk about the sport with you!
Posted by Skate Guard Blog at September 17, 2013
Email ThisBlogThis!Share to TwitterShare to FacebookShare to Pinterest
Newer Post Older Post Home