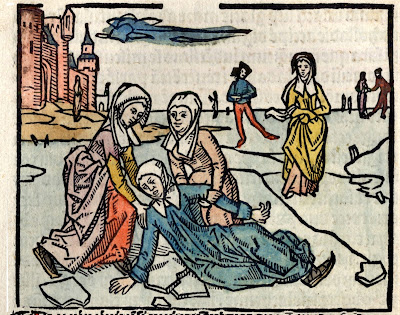 The story of Lidwina, the patron saint of ice skating, is a gruesome and fascinating one indeed. She was a Dutch girl born on a Palm Sunday and raised alongside eight brothers to a father and mother (Peter and Petronella) who were a "poor noble" and 'poor commoner". By all accounts, she was "a lovely and charming girl". At age fifteen, in a severe winter Lidwina (known as Lidwina of Schiedam) was skating with girlfriends when she fell and broke a rib and was put in bed in her family home. After her injury, gangrene set in and Lidwina became partially paralyzed.

She never fully recovered and became progressively more disabled and ill throughout her life. It is believed that she became paralyzed with the exception of her left hand and that parts of her body... "fell off". Blood is reported to have spontaneously poured from her mouth, ears and nose. Some historians have hypothesized that accounts of her affliction may have actually been describing one of the first known cases of Multiple Sclerosis, which of course would not have been known at that time (Lidwina lived from 1380-1433).

Much of Lidwina's time was spent in prayer, meditation and in offering her pain to God. Devoutly spiritual, she developed a devotion to The Eucharist, was visited by saints and had visions in which she was shown a "Heaven and Purgatory". Miracles reportedly occurred at her beside. After Lidwina's fall while skating, she fasted constantly and became reputed as a healer and holy woman, although many viewed her as being 'under the influence of an evil spirit' due to her deteriorating health. Her hometown of Schiedam created a document that attests to her fasting. She ate only a little piece of apple, then part of a date, watered down wine and then river water that was contaminated with salt from the tides. This document created by Schiedam town officials (which still exists) also claims that she shed skin, bones and part of her intestines, which her parents kept in a vase until Lidwina had her mother bury them after they drew much attention. She lost her sight seven years before her death but continued to fast and report visions until her death at age fifty three. 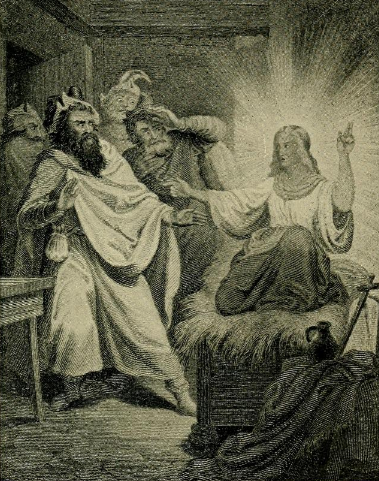 Posthumously, Lidwina's grave became a place of pilgrimage. In 1434, a chapel was built over it. Her relics were taken to Brussels, Belgium in 1615 but returned to Schiedam in 1871. In 1890, Pope Leo XIII of the Roman Catholic Church canonized the skater and made her a saint. She is known as the patron saint of ice skaters and the chronically ill and her "feast day" is observed on March 18, April 14 or June 14 depending on the region and area's tradition. The Church Of Lidwina, which was opened in 1859 in Schiedam closed in 1969, and her statue and relics were removed and moved to the chapel dedicated to her in a rest home in West-Frankeland. In Schiedam, the Intorno Ensemble foundation presents a bi-annual musical theatrical production about Lidwina, the town saint, in one of Schiedam's churches. Of her suffering at the end of her life, Lidwina allegedly said, "If I live to be healthy by Ave Maria again I would not want to."

This bizarre and heartwarming history makes it so fitting that Lidwina was named the patron saint of ice skating. Surely one of the parables in this story is that if you fall down, you can't give up.

Skate Guard is a blog dedicated to preserving the rich, colourful and fascinating history of figure skating and archives hundreds of compelling features and interviews in a searchable format for readers worldwide. Though there never has been nor will there be a charge for access to these resources, you taking the time to 'like' on the blog's Facebook page at http://www.facebook.com/SkateGuard would be so very much appreciated. Already 'liking'? Consider sharing this feature for others via social media. It would make all the difference in the blog reaching a wider audience. Have a question or comment regarding anything you have read here or have a suggestion for a topic related to figure skating history you would like to see covered? I'd love to hear from you! Learn the many ways you can reach out at http://skateguard1.blogspot.ca/p/contact.html.
Posted by Skate Guard Blog at September 03, 2013
Email ThisBlogThis!Share to TwitterShare to FacebookShare to Pinterest
Newer Post Older Post Home