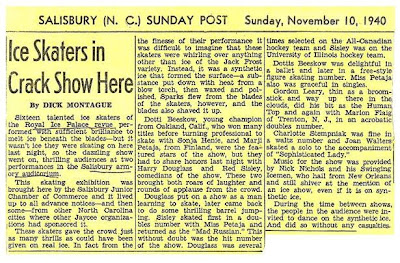 I feel like Sophia Petrillo. I lie. I'm definitely more of a Rose. But let's pretend. Picture it... Gastonia, North Carolina, 1941. The war was raging overseas but the Gastonia Armory was alive with the thrills of the Royal Ice Palace Revue, an ice show that featured 26 performers; 14 trick and figure skaters and a 12 lady chorus. Producers of the show allowed and encouraged people to dance on the ice during the intermission to the sounds of Nick Nichols, his Swinging Ice Men and his Electric Organ. The dancers were dancing on the ice in shoes and the indentations made by the dancers high heels could be heated away with a hot iron. It was in this era and in this shows that Mesha Provo uncovered the story of her birth mother, who was a touring ice skater in several shows of the era and went on to coach skating until a fall and injury forced her off the ice at age 70. Mesha, who is in the process of writing two books about her birth mother's life and researching her life's story and the role skating played in it, talked to me about her experience and her birth mother's fascinating story.

Charlotte, Mesha's birth mother, was not a wealthy woman and didn't have money to train like many other skaters. She did have some formative training in the sport before she started her professional career though. "I know patch was everything to her and she loved it. As I understand it, it taught (and almost self taught) discipline and the lines of skating," said Mesha, referring to the compulsory figures that were schooled rigorously to all skaters during that era. Charlotte earned her first job as a skater in 1939. Her first position in a show was as a chorus skater, which developed into a role as a feature skater with a show called the Royal American Ice Palace. "It toured with the Royal American Show, which was the largest carnival in the world for over 70 years. The Royal was for Canada and the American was for the United States," explained Mesha. "They also joined a large show for a spot date in Atlanta and then went to Cuba in March of 1940 in a show they called the Ice Follies, which was not the Ice Follies. They had some well known skaters in it. They performed at the Opera House in Havana. I have some great photos of that trip. Then in April, they went out with the carnival, which ended their season in mid October and the ice show traveled by bus for spot dates in the deep South till December." Mesha went on to explain, "After that season, the owner of the ice show joined the army in January of 1941 (U.S. was not in the war yet) and the ice show transferred to another carnival, Beckmann and Gerety, and ran that season till the end of October. She was back in Detroit by the end of November 1941 and everything changed." With regards to skating shows in the Southern states, Mesha explained "for some cities, Mobile, Birmingham, etc. this show was the first commercial ice show presented. I think that's pretty cool and back then it was the old Jim Crow laws." Charlotte continued her skating career after World War II ended in 1945: "August 15th, 1945, was the end of the war and she auditioned and got a spot on the Ice Cycles of 1946. It was a third show as a combined effort of both the Ice Follies and the Ice Capades. But she made a blunder and that cost her her big chance. She was only 26. I have a cheque from Holiday on Ice from the 50's, but I believe it was only a spot date." After retiring from professional skating, Charlotte taught skating in a community rink in the 1960's. Skating was in Mesha's genes: "I was born in Michigan and probably like Canada, skating is what you did in the winter if you wanted to play outside. I skated as a child, often 4 times a week, but never had lessons or did it progress to anything. I had no information about my birth mother growing up. I wish I did, I think I would have been more athletic, if I knew that is was a part of her life."

Charlotte had Mesha when she was 32 years old. She wasn't "a kid" (as Mesha stated) but she was still in the midst of her professional career and desired to continue skating at the time. They reunited in 1992, when Charlotte was 72 years of age. I asked Mesha why it was so important that she meet her birth mother and her answer was beautiful: "Your question is the hardest and easiest for an adoptee who has found their own voice... because I had to and I wanted to. I was 39 and secure. It is really rough for young people who are trying to find themselves (in life), I wouldn't recommend it unless you have a good pillow to fall back on."

The first book Mesha Provo aims to write is to be called "Skates On A Suitcase" and will share the biographical story from Charlotte's birth until she was 40 years old. "The whole search and found is not part of that story," explained Mesha. It will be included in a second, later book. "I get caught up in the research and I have this gnome on my shoulder that wants me to get it right." Mesha appears to be on the right track, doing her homework about skating and even hoping to talk about more skaters and shows from the era in this book. And that's what's so fascinating about reading and writing about history... when you go to look for one thing, you find 20 more things that fascinate you too! One of these things is Mesha and Charlotte's story. If you'd like to know more or see many of the wonderful pictures Mesha has uncovered as she explores her mother's story, check out her Facebook page at https://www.facebook.com/skatesonasuitcase. If you have more information about that golden era of figure skating from 1935-1950, reach out to her! She'd love to hear from you as she works hard to share a story that's very important to her and very interesting to all of us.

Skate Guard is a blog dedicated to preserving the rich, colourful and fascinating history of figure skating. Over ten years, the blog has featured over a thousand free articles covering all aspects of the sport's history, as well as four compelling in-depth features. To read the latest articles, follow the blog on Facebook, Twitter, Pinterest and YouTube. If you enjoy Skate Guard, please show your support for this archive by ordering a copy of the figure skating reference books "The Almanac of Canadian Figure Skating", "Technical Merit: A History of Figure Skating Jumps" and "A Bibliography of Figure Skating": https://skateguard1.blogspot.com/p/buy-book.html.
Posted by Skate Guard Blog at September 15, 2013
Email ThisBlogThis!Share to TwitterShare to FacebookShare to Pinterest
Newer Post Older Post Home