Still Performing At Seventy Seven and Eighty One: Why The Protopopov's Are Truly Amazing! 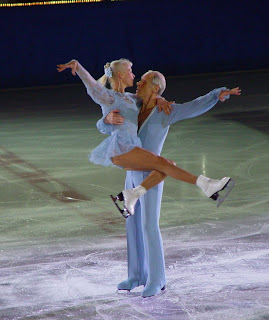 I wanted to take a moment and talk about how completely amazing it is to me that Ludmila and Oleg Protopopov are still performing. They were announced as once again being among the cast members at this year's "An Evening With Champions" fundraiser for the Jimmy Fund at Harvard University, a show they have been performing in for decades. To give people who aren't really familiar with who the Protopopovs are some scope, they won the gold medals in the 1964 and 1968 Winter Olympics, four World Championships, defected to Switzerland from the Soviet Union in 1979  and have been performing as professional skaters since 1973. That's forty years! The only other skaters even nearing that kind of longevity as performers are Dorothy Hamill, Robin Cousins, Scott Hamilton and Jayne Torvill and Christopher Dean... that said, none of these skaters were winning World titles in the 1960's! The duo actually won their first senior medal at the Soviet Championships in 1955, meaning that they are pushing sixty years skating. Now seventy seven and eighty one years old respectively, the duo truly epitomize that skating is a lifelong sport and that like a fine wine, it gets better with age.

There's a certain elegance, a charm, a sophistication that these two bring to the ice to these very day. The very best skaters of all time all have that... an understanding of music and how to move to it. The Protopopovs don't rush through their movements, they take time and care to express each note and don't need to still perform jumps and lifts to show what makes their skating magical. I want to applaud what they represent and who they are and the fact they still love skating so much that they get out there and create new programs to perform to audiences that appreciate them not as a novelty but as the legends they are. There is something so truly beautiful and awe inspiring about that.

Skate Guard is a blog dedicated to preserving the rich, colourful and fascinating history of figure skating and archives hundreds of compelling features and interviews in a searchable format for readers worldwide. Though there never has been nor will there be a charge for access to these resources, you taking the time to 'like' on the blog's Facebook page at http://www.facebook.com/SkateGuard would be so very much appreciated. Already 'liking'? Consider sharing this feature for others via social media. It would make all the difference in the blog reaching a wider audience. Have a question or comment regarding anything you have read here or have a suggestion for a topic related to figure skating history you would like to see covered? I'd love to hear from you! Learn the many ways you can reach out at http://skateguard1.blogspot.ca/p/contact.html.
Posted by Skate Guard Blog at September 09, 2013
Email ThisBlogThis!Share to TwitterShare to FacebookShare to Pinterest
Newer Post Older Post Home