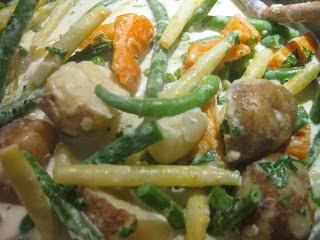 If you've never had a proper bowl of hodge podge, you don't know what you're missing. It's a traditional Nova Scotian fall dish that uses nothing but the best and freshest vegetables. It just warms your soul. I'm craving it already by just mentioning it. In the Maritimes, we use the expression "hodge podge" to describe anything that's got a little bit of everything. Figure skating is such constantly evolves and changes that much that it's not always easy to keep track of all of the developments, stories and (sometimes) dramas that develop. I've had several topics that I'd been wanting to write about for quite a while that all seemed to have one common denominator... they are all tales that many people may not know or if they did, might not remember. From lesser known comebacks to judging scandals to Olympic medallists changing disciplines, let's take a look at a hodge podge of 6.0 fascinating stories from the skating world:

After winning her second Olympic Gold Medal at the Nagano Games, Pasha (Oksana) Grishuk turned professional and competed professionally with Alexander Zhulin, competing against her former partner Evgeny Platov who had teamed up with Zhulin's former partner (and ex-wife) Maya Usova. Throw in some romance and this whole drama was nothing less than anything you'd expect from Pasha during her skating career... nor on Coronation Street or General Hospital for that matter. When the partnership with Zhulin dissolved, Grishuk decided to try to develop a solo career. Ekaterina Gordeeva had done it after Sergei Grinkov's tragic death, but Pasha was an ice dancer. How was that going to go? In an interview at the time, Pasha said "I love the freedom of single skating. I love the freedom of only relying on myself and the freedom of movement it gives me on the ice". Pasha actually surprised everyone with her singles skating prowess, skating in shows and hitting double axels, double salchows and double toes in her performances and even landing triple salchows in practice. The solo career did not last for any extended length of time though; she was slated to compete in the 1999 ESPN Pro Championships (against Tonya Harding) but withdrew. She did go on to do solo skating in the Nutcracker On Ice tour. Now a mother, she reunited with former partner
Platov in Nagano in February 2008 for the ten year anniversary of their second Olympic win.

When the ISU decided to allow skaters to reinstate in time for the 1994 Winter Olympics in Lillehammer, Norway, some of skating's greatest were right there and ready to attempt to reclaim their previous glory or in many cases, come back to push themselves, better themselves and have another shot at the Olympic experience. We all know how things played out for Brian Boitano, Katarina Witt, Jayne Torvill and Christopher Dean, Ekaterina Gordeeva and Sergei Grinkov and the rest... but what about the other skaters who attempted comebacks during that era until the ISU closed that door in 1996? Two of those lesser known comebacks came from right here in Canada. And I'm not talking about the absolutely heartbreaking comeback of Josee Chouinard during the 1995/1996 season. Vern Taylor, a 3 time medallist at the Canadian Nationals in the 1970's and the first person recognized to have successfully landed a triple axel in competition at the 1978 World Championships, furnished a comeback of his own. Competing at the 1994 Canadian Nationals, he did not crack the top 10 but still showed he could do triple jumps and his love for the sport. Two years later, Shannon Allison, who won the bronze medal behind Liz Manley and Charlene Wong at the 1988 Canadian Nationals and effectively just missed a trip to the Calgary Olympics, came back as well in 1993. Like Vern, her comeback wasn't as victorious as her previous efforts. She was struck with bronchial pneumonia and finished 11th at the 1996 Canadian National Championships, which she qualified for by finishing 2nd at the Western Canadian Championships that year. Allison happily moved on and returned to coaching and her education.

After the judging scandal to end all judging scandals took place at the Salt Lake City Olympics, external and internal scrutiny was certainly at an all time high at the 2002 World Figure Skating Championships in Nagano, Japan (the site of the 1998 Olympics). Lithuanian ice dancers Margarita Drobiazko and Povilas Vanagas had a scandal of their own on their hands... and it wasn't anything THEY did wrong. After losing the bronze medal in a 5-4 split to the Israeli team of Galit Chait and Sergei Sakhnovski of Israel, the Lithuanian Skating Federation filed a protest with the referee of the ice dance event Courtney Jones regarding the judging of the event. Bulgaria's Albena Denkova and Maxim Staviski circulated a petition supporting Drobiazko and Vanagas' deservedness of the bronze medal. The letter sent by the Lithuanian Skating Federation urged Jones to look into the result and said that the Federation felt "the result was clear for our team". In all fairness to the Lithuanian Federation and Drobiazko and Vanagas, it totally was. Drobiazko and Vanagas (and Denkova and Staviski) gave a press conference where they alleged the father of Israeli dancer Galit Chait made payoffs to judges and that physical intimidation against several couples occurred. Although these allegations were not included in the dispute with Jones, it appears he and the ISU dismissed it without a second look even without that information. At any rate, this unfortunately was one of many raw deals that Drobiazko and Vanagas got in their skating career... they were an underrated, expressive and very strong team that unfortunately got the short end of the stick far too often.

How they do it, I have no sweet clue. It's funny, I have NO problem on a pair of figure skates, but put me on a pair of rollerblades or roller skates (or even hockey skates for that matter) and I'll end up falling in a garbage can (true story... it happened!). Competitive roller skating (if you ever have watched it) is actually quite similar to figure skating although some of the elements and the ways they are performed are quite different. There's really something quite distinctive to the spring and jumping technique of roller skaters that I think has a lot to do with the takeoff. Two examples of skaters who transitioned from roller skating to the ice with great success are 1998 Olympic Gold Medallist Tara Lipinski and German Olympian Marina Kielmann. If you look at their jumping technique comparitively (and even the spins) you'll notice some strong comparisons that are very indicative of roller skating. 2 time World and European Roller Skating Champion Dario Betti of Italy is the latest skater to turn in rollers for toe picks. His performance at this season's Lombardia Trophy showed that he's VERY quickly translating his jumping ability to the ice. It will be quite interesting to see how he skates and places at Italian Nationals - he certainly looks like he has the ability to play 'spoiler'. 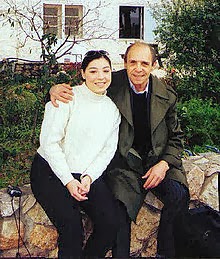 Skating is full of tragic stories of skaters we've lost too soon... the accidental drug overdose of Christopher
Bowman, the murder of Kira Ivanova, the suicide of Germany's Sven Meyer, the heart attacks of Sergei Grinkov and Heiko Fischer, the tragic loss of John Curry, Rob McCall, Brian Wright and countless others to AIDS/HIV, Freddie Tomlins death during World War II... but one of the most heartbreaking stories of a skater we lost far too soon is that of Belgrade's Helena Pajovic, simply for the fact she was quite young and promising and seemingly ready to take her skating career to the next step. A three time competitor at the World Championships, Pajovic was really a shining light for Yugoslavia, who hadn't had a strong ladies competitor in some time. In December 2000, Pajovic headed to Metulla, Israel for the Skate Israel competition, where she won the bronze medal. Heading back from the competition, Pajovic and her father were in a car accident and were both killed on Christmas Eve. Helena was remembered by the Serbian Skating Federation with the Helena Pajovic Cup (Skate Helena) which was first held in 2001 and is held annually in Serbia to this day.

Sop up what's left with some nice hearty bread and be sure to double or triple up so that you have leftovers... this is always better the second day! This recipe is for 4-6 people:

Ingredients (fresh from a farmer's market or garden):

10-12 new potatoes – scrubbed/not peeled, and halved – quarter any large potatoes, and don’t cut the small ones – you want the potato pieces to be about the same size
2-3 cups chopped new carrots – scrubbed/not peeled, cut into bite sized pieces (you can peel them if you like)
1 cup chopped yellow beans – 1 inch long pieces
1 cup chopped green beans – 1 inch long pieces
1 cup shelled pod peas – you want just the peas, not the pods
1.5 cups cream
1/4 – 1/2 cup butter
salt and pepper to taste

1. Fill a large, heavy pot about halfway with water, and salt lightly (about 1/2 teaspoon of salt). Bring to a boil.
2. Add the potatoes to the boiling water. Cook for about 7 minutes.
3. Add the carrots to the pot, and continue cooking for about 5 minutes.
4. Next add the yellow and green beans to the pot, and continue cooking for about 5 minutes.
5. Finally, add the peas, and continue cooking for about 3 minutes.
6. Drain off most of the water – leave about an inch of water (no more) in the bottom of the pot with the vegetables. Return the pot to the stove, and reduce burner heat to low. Add the blend and butter, and some salt and pepper (I start with a 1/4 teaspoon of each).
7. Gently stir to combine, allowing the the blend and butter to heat through. As you’re stirring, the potatoes might break up a bit. As the the blend and butter heat through, the broth may begin to thicken. This is normal. Don’t allow the mixture to boil.
8. Once the mixture has heated through, it is ready to serve. Season with a little salt and pepper to taste. Serve with bread.

But WAIT... there's more! If you call within the next 30 minutes, we'll throw in this link to the blog's Facebook page, which has news, features and videos that aren't on the blog for the low, low price of free. That's right... I don't do this for PayPal donations or profit of any sort. I write this blog because I believe in great skating - artistic skating - and want to share stories about the sport's history, it's amazing skaters and areas of the sport you may not know enough about with as big of an audience as I can. All you have to do is "LIKE" it: http://www.facebook.com/SkateGuard. If you get 10 friends to like, I'll throw in a big hug. And if you get 100 friends, let's just as I'm "that kind of girl".. haha. You can also follow all of the fun along on Twitter at http://twitter.com/SkateGuardBlog.
Posted by Skate Guard Blog at October 15, 2013
Email ThisBlogThis!Share to TwitterShare to FacebookShare to Pinterest
Newer Post Older Post Home
"As a rule an author has one or two popular ways of contrasting the past with the present. He can treat the past as lying in comparative doleful ignorance, or he can explain that the past was infinitely superior to the day we live in. Of course, either method is the popular journalism of the moment, and in reality there is no sharp contrast, but a gradual transition which leads the past into the present." - Joel B. Liberman, Skating Club Of New York