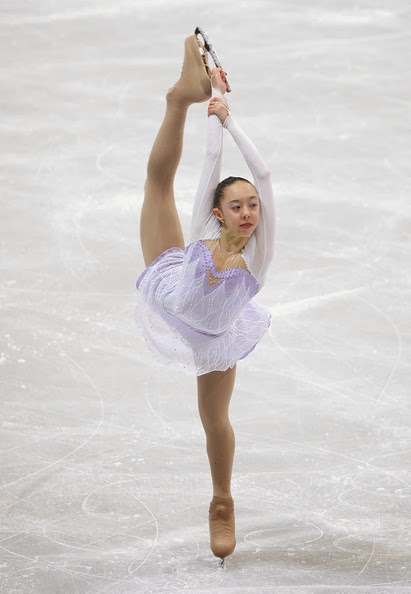 From Newington, Connecticut to Melbourne, Australia, Brooklee Han trained on two continents all in the hope of achieving a dream that she has now realized. Beginning her skating career in New York at the age of five, the eighteen year old skater advantageously used her father's Australian roots to her advantage and embarked on a career representing Australia. Finishing 2nd at the Australian Nationals last year, Han went on to represent Australia at the Four Continents and World Championships and in laying down two solid skates at the Nebelhorn Trophy Olympic qualifying event in Germany and finishing 5th earned her country (and herself) a trip to the Sochi Winter Olympics. Brooklee took time from her very busy fall competitive season to talk about her Olympic dream, her travels, goals and much more in this fantastic interview:

Q: In finishing 5th at the Nebelhorn Trophy in Oberstdorf, Germany, you earned your country a spot at the Winter Olympic Games in Sochi, Russia. That's huge for you! What does it mean to you to have earned your country this spot and to have skated so well when it counted?

A: My goal going into Nebelhorn Trophy was obviously to qualify a quota spot for Australia for the 2014 Olympics. It felt great to achieve my goal and I was so glad to be able to put out a great skate when it really mattered. The Olympic Qualifying experience was definitely a bit stressful, but still a very exciting experience. It felt so great to qualify a quota spot and it was even more exciting that the rest of my team mates also qualified!

Q: What is the qualifying process for the Olympics like now? You still have Australian Nationals to contend with in December. Will that be the deciding factor as to which Australian ladies skater goes to Sochi or will they also take international competitions and your result in Oberstdorf into account?

A: According to Ice Skating Australia, the governing federation for Australian figure skaters and the Australian Olympic Committee, the policies state that the skater who earns the spot will be the one representing Australia in the Olympics.

Q: You live and train in the United States and represent Australia as your father is from that country. How often have you traveled to Australia to skate and compete and what are the biggest differences between skating in the U.S. and skating "Down Under"?

A: I have been traveling back and forth to Australia since I was 8 weeks old. We go over a couple times a year for me to compete and to visit family. When I train in Australia I skate at Medibank Icehouse in Melbourne, Victoria. Icehouse is a beautiful facility with two gorgeous rinks. Training in Australia is not very different for me from training in the U.S. I am able to get in the same number of hours in on the ice as I would in the US, with the only major difference being that the ice is very early in the morning with the first session starting at 5:45 AM. However, I don't mind this change because I am done with all of my on ice and off ice training by about 10.

Q: You have made three trips to the World Junior Championships and have also competed at the Four Continents Championships and World Championships. Who are the most interesting people you've met while competing and of the places you've traveled, which are your favourites and why?

A: I am very lucky that I have been able to travel so many exciting places and meet so many different people through my skating. By far my favorite place on earth has to be Oberstdorf, Germany. I love absolutely everything about Oberstdorf from the mountains, to the village, the wonderful people and educated skating fans, to the gorgeous rink and of course my favorite food schnitzel! Runner-up to Oberstdorf would have to be Slovenia. The forests, lakes and Julian Alps make Slovenia an incredibly picturesque country and somewhere I would love to go to again. Finally, like most skaters, I love skating in Japan. My first experience skating in Japan was this past year in Osaka at Four Continents. The fans there are amazing and so supportive of all the athletes no matter which country they represent. I felt so privileged to skate in front of such an amazing crowd and I cannot wait until the next time I get to skate in Japan. As I stated before skating has also allowed me to meet some really great people. One highlight would have to be Carolina Kostner. I grew up watching Carolina compete and when we arrived in Toronto, Canada she was one of the people waiting with us to get picked up and brought to London for the World Championships. All of a sudden she just comes over and introduces herself to me and starts chatting. That was pretty cool! Another highlight would have to be skating in the gala at Nebelhorn Trophy. In September of 2009 I did a show in Simsbury, Connecticut at the International Skating Center with Miki Ando and Nobunari Oda and it was so amazing to get to do another show with them in Oberstdorf not as one of the kids, but as a future Olympian. And finally, I am a bit of an ice dance dork and at this year's World Championships and Four Continents I got to meet Meryl Davis and Charlie White, which was AWESOME! I absolutely love Meryl and Charlie's skating and it was just so exciting to even be at the same events as they were.

Q: With the Australian National Championships coming up, what are your goals for this season?

A: For the rest of the season, I just hope to keep improving the quality of my performances at each of my events and to skate clean and solid programs.

Q: In what area has your skating most improved this year?

A: Over the past year, I think the two aspects of my skating that have really improved are the quality of my jumps and my artistry. With my new long this year I feel like I am really able to express to the music and bring the judges and audience into the performance.

Q: When it comes to other skaters, who are your role models in the sport?

A: Figure skating is a very difficult sport, and it is very hard to master all aspects of it. Due to this, I look up to many different skaters for many different things. I really admire Alissa Czisny, Akiko Suzuki, Carolina Kostner, and Michelle Kwan for their elegance and artistry on the ice. I love Midori Ito’s jumps and power. Kurt Browning, Scott Hamilton, and Ryan Bradley are all fantastic showmen, and their enthusiasm and ability to pursue certain characters in their programs is quite inspiring. Finally I really admire, Alexei Yagudin, Ilia Kulik, Alexei Urmanov, and Shizuka Arakawa for their ability to posses the whole package, so to speak. These skaters had the jumps, the spins and incredible presentation, making them truly inspiring and a joy to watch.

A: I guess one thing most people don't know about me is that I ride horses. My father was the Junior Young Rider Eventing Reserve Champion of Australia and my mother worked for the US Eventing team so I was brought up around horses. The first time I sat on a horse I was 6 weeks old and I competed in my first horse show at 20 months old. I have a pony named Fatboy and I have had him for almost 14 years. Fatboy's favorite sport is figure skating as the more time I spend on the ice the less time I spend riding him. He wants to be sure he is true to his name.


Q: What do you enjoy most about skating?

A: There are a lot of aspects I love about skating. One of them would definitely be the spins. I love creating new spin positions and coming up with new combinations to do in the programs. This task is often quite challenging but is something I really enjoy. I also love jumping. Mastering a new jump or combination is such a rewarding feeling and it is so great to know that all of my hard work has paid off.


Skate Guard is a blog dedicated to preserving the rich, colourful and fascinating history of figure skating and archives hundreds of compelling features and interviews in a searchable format for readers worldwide. Though there never has been nor will there be a charge for access to these resources, you taking the time to 'like' on the blog's Facebook page at http://www.facebook.com/SkateGuard would be so very much appreciated. Already 'liking'? Consider sharing this feature for others via social media. It would make all the difference in the blog reaching a wider audience. Have a question or comment regarding anything you have read here or have a suggestion for a topic related to figure skating history you would like to see covered? I'd love to hear from you! Learn the many ways you can reach out at http://skateguard1.blogspot.ca/p/contact.html.
Posted by Skate Guard Blog at October 20, 2013
Email ThisBlogThis!Share to TwitterShare to FacebookShare to Pinterest
Newer Post Older Post Home
"As a rule an author has one or two popular ways of contrasting the past with the present. He can treat the past as lying in comparative doleful ignorance, or he can explain that the past was infinitely superior to the day we live in. Of course, either method is the popular journalism of the moment, and in reality there is no sharp contrast, but a gradual transition which leads the past into the present." - Joel B. Liberman, Skating Club Of New York