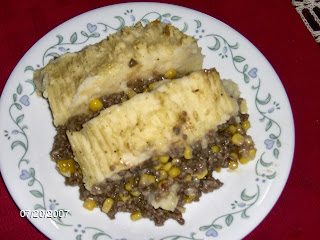 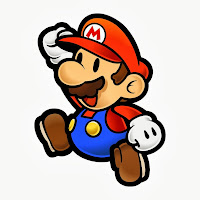 I keep on watching it again and again. Up, B, A, left, left, get that mushroom! I'm sorry, but I think Kim Lucine's Super Mario Brothers short program is the best thing since sliced bread. And sliced bread is pretty damn fancy if you ask me! Seriously though, I have to give two jazz hands up and a Hey Girl Hey! to this program and I don't even like Super Mario. Growing up, we'd play every so often when visiting family friends but it wasn't really our thing. The only computer/video games I ever really got into were the Monkey Island ones... and I got into those ones like crazy... that's a whole other blog just waiting NOT to happen. Anyway, I'm going on... "I love Annie Lennox but I drink a little".
What I think is so amazing about Lucine's program is not only that he's being unique, entertaining the AUDIENCE and not just the judges, musical and creative, but that he's TAKING A RISK. When you skate to theme music for a video game that's that recognizable, you need to able to pull it off... especially in a short program where the technical aspect of the program is so paramount. I don't know if you choose to see it, but a good 80% of the programs in ISU eligible skating competitions that you see out there are "safe". In an Olympic year, that goes up to 95%. If you look at skaters program choices this year, you are seeing some of the "safest" choices going. Let's review some of the Olympic medal hopeful's music choices, shall we? We've got "The Firebird", Sergei Rachmaninoff's "Piano Concerto No. 2", "Jesus Christ Superstar", "Sheherazade", "Sleeping Beauty", "Romeo And Juliet", "Carmen", "Carmen", "Carmen", "Carmen", "Swan Lake", Rhapsody On A Theme Of I Couldn't Give 2 Shits, Kentucky Fried Chicken And A Pizza Piazzolla. Everyone's doing what they think will appease the judges and it takes a special, fearless kind of skater - especially in an Olympic year - to attempt something this original. Bravo Kim for being that skater!


You have to wait for it... the real fun starts after the first two jumping passes!

It's funny... not so long ago there were a lot more Kim Lucines... skaters like Toller Cranston, Gary Beacom, Susanna Rakhamo and Petri Kokko, Laurent Tobel, Surya Bonaly, Laetitia Hubert, Sandra Garde, Alexandr Fadeev, Philippe Candeloro, Shawn Sawyer, Allen Schramm, Stannick Jeanette, Olga Markova, Ilia Klimkin, Natalia Bestemianova and Andrei Bukin, Vanessa Gusmeroli, Eric Millot, Jayne Torvill and Christopher Dean, Ilia Klimkin, Isabelle and Paul Duchesnay and countless others who weren't afraid to go against the grain and try new things. As Dick Button famously said, "GOOD FOR YOU, LUCINDA RUH!" There's another one. But why aren't skaters these days putting them out there and being a little more risky and creative in their program choices? I think the answer lies partly in the difficulty of structuring the kinds of things these IJS programs demand to music and partly in skaters hiring the right choreographers. There are certain (very popular) choreographers out there that honestly only seem to put out the same thing. It's like someone who doesn't cook but can make, for instance, a really good shepherd's pie. If you ask them to make you chicken supreme, it might be right nasty like... but honest to Pete (who's Pete anyway?), they make a great shepherd's pie. Having established that's the only thing they cook and how well they cook it, naturally that's going to be the recipe they always offer people and take pride in, that recipe that wins cooking competitions and omnomnom's... You can serve that pie on a million different plates with different music (or muzak) playing in the background, but it's still going to be shepherd's pie. I hope you like shepherd's pie by the way, because it's on the menu this year for lunch AND supper. Room service? Shepherd's pie. I might start taking up playing Super Mario video games at this rate. Thanks again Kim Lucine!

But WAIT... there's more! If you call within the next 30 minutes, we'll throw in this link to the blog's Facebook page, which has news, features and videos that aren't on the blog for the low, low price of free. That's right... I don't do this for PayPal donations or profit of any sort. I write this blog because I believe in great skating - artistic skating - and want to share stories about the sport's history, it's amazing skaters and areas of the sport you may not know enough about with as big of an audience as I can. All you have to do is "LIKE" it: http://www.facebook.com/SkateGuard. If you get 10 friends to like, I'll throw in a big hug. And if you get 100 friends, let's just as I'm "that kind of girl".. haha. You can also follow all of the fun along on Twitter at http://twitter.com/SkateGuardBlog.
Posted by Skate Guard Blog at October 05, 2013
Email ThisBlogThis!Share to TwitterShare to FacebookShare to Pinterest
Newer Post Older Post Home
"As a rule an author has one or two popular ways of contrasting the past with the present. He can treat the past as lying in comparative doleful ignorance, or he can explain that the past was infinitely superior to the day we live in. Of course, either method is the popular journalism of the moment, and in reality there is no sharp contrast, but a gradual transition which leads the past into the present." - Joel B. Liberman, Skating Club Of New York