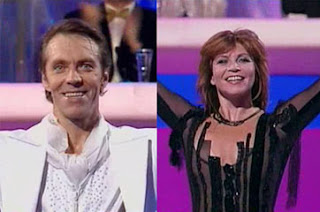 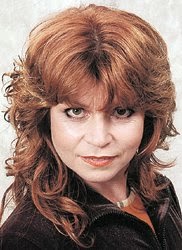 Jayne Torvill, Christopher Dean, Marina Klimova, Sergei Ponomarenko, Pasha Grishuk, Tessa Virtue, Scott Moir, Natalia Linichuk... these are just a few of the names of the select but mighty crew of the world's best ice dancers who have achieved the ultimate goal in skating: winning an Olympic gold medal. That list gets even smaller if you add a second Olympic medal to the list... or tack on 4 world titles, 3 world silver medals, 5 European titles, a World Professional title, 3 Soviet national titles and wins at important international and professional competitions. Not only were Natalia Bestemianova and Andrei Bukin two of the most talented ice dancers that the sport was seen, they are two of the most enduring ice dance teams in the sport period. Still performing regularly in Russia, Korea and around the world as part of Natasha's husband Igor Bobrin's Russian Stars On Ice (Bobrin Ice Theatre), Natalia and Andrei are also two of the most innovative, creative and daring ice dance teams the sport has honestly ever seen. What Toller Cranston and Gary Beacom are to singles skating, B&B (as they are affectionately called by fans) are really that ground breaking, 'push the envelope' team in ice dance. With husband Igor acting as choreographer, Natalia and Andrei's performances in professional competitions, shows and tours and to this day in the Bobrin Ice Theatre, are really the kinds of skating performances that just make you drop your jaw in awe. Tackling everything from classical themes like "Romeo And Juliet" to the hauntingly beautiful and intense story of "Rasputin" to comedy and avant garde pieces, there is really nothing that Natalia and Andrei can't or won't do. That's what I love about them. When you're presenting art in any physically expressive way like dance, pantomime or skating, you need to be bold. You need to convey your message and draw your audience into the story. It needs to be larger than life. With the kind assistance of Bobrin Ice Theatre's Svetlana Benedictova, it was my absolute pleasure to make a little history here on Skate Guard and interview my first Olympic Gold Medallist and one of my own all time favourites. Natasha wanted to kindly stress that "these are her answers and perhaps Andrei has got another opinion". I've included many rare videos of some of B&B's most daring and brilliant performances. Take the time to watch each and every one of them. You might want to watch some of them twice just to digest the depth to each piece. Also, do both Natasha and I a favour - please take the time share this interview! I don't think enough skating fans really have any ideal of just how brilliant their programs as professionals are, and I'd love to see more people exposed to their brilliant work. It makes my heart smile a little. "Without further ado", ladies and gentlemen... 1988 Olympic Gold Medallist Natalia Bestemianova:

Q: I want to start by saying I think you are just fabulous. In winning the silver medal at the 1984 Winter Olympics behind Torvill and Dean in Sarajevo and the gold at the 1988 Games in Calgary, you and Andrei became part of an elite club of skaters to win Olympic gold and did it with such confidence and great programs. Taking into account your 5 European titles and 4 World titles as well, what would you say was your proudest moment from your eligible or "amateur" career?

A: The proudest moment was and remains the Olympic gold medal.

Q: What I don't think enough people realize is the scope of your work as a professional skater. You, Andrei and your husband Igor Bobrin have really been instrumental in giving professional and artistic skating a venue and voice in Russia with the Ice Miniature Theater and Moscow Stars On Ice (Bobrin Ice Theatre). You are all truly pioneers in ice theatre and are also U.S. Open and World Professional Champions. Why is artistry and creativity so important in skating?

A: All of the skaters perform figure skating elements - some a little better, others a little worse. If you want to be remembered, you have to add to these elements artistry, musical talent and of course, interesting programs.

Rasputin, as skated in the gala at the 1993 World Figure Skating Championships in Prague

Q: You have really touched the hearts and minds of audiences around the world with the creativity of so many of your professional programs. From comedy to dramatic to avant garde to completely one of a kind, you always have seemed to come up with something different. Where did you get the ideas for many of your amazing programs, in particular "The Witch" and "Rasputin"?

A: Our professional programs including "The Witch" and "Rasputin" were put together by Igor Bobrin.

The Witch, as performed at the 1997 Legends Of Figure Skating Competition, an expanded presentation based on their earlier program "Pictures At An Exhibition"

Q You've choreographed programs for many of the world's best including fellow Olympic Gold Medallists Oksana Baiul, Sarah Hughes, Tatiana Navka and Roman Kostomarov. Who are your favourite people you have worked with?

A: The most favourite skaters with whom we worked were Federica Faiella and Massimo Scali.


A: Toller Cranston, Ludmila Belousova and Oleg Protopopov and Janet Lynn. Thanks to these skaters I started to skate. One can have an idol in childhood but in the process of growing up and gaining more and more experience it is hard to see a single person as your idol.

Q: What are your thoughts on the current IJS judging system and the elimination of compulsory dances from elite competition?

A: It is hard to answer shortly about the new system, but a very short answer would be "I do not like it very much".

Q: Your former coach Tatiana Tarasova is a legend in her own right. What do you appreciate most about Tatiana and what is your relationship like today?

A: We are in very good relations with Tarasova now although we did not communicate much during all these years. Thanks to God, now everything is wonderful.

Q: What is your absolute favourite food to prepare, favourite song and favourite book?

A: Vegetables stew and "I Will Survive" by Tina Turner. When I was a child, I loved all French classical writers, especially Victor Hugo. Now I like modern Russian writers Viktoria Tokareva and Boris Akunin.

A: I am a very calm and gentle person at home, nothing common with the image I perform on ice.

Q: What keeps you inspired to get on the ice and continue performing and pushing the envelope?

A: As I have already mentioned, I am a very gentle person, but if I do not perform on ice I will explode with the ideas and thoughts which come into my head. I skate not because I like it, I skate because I cannot live without it.

But WAIT... there's more! If you call within the next 30 minutes, we'll throw in this link to the blog's Facebook page, which has news, features and videos that aren't on the blog for the low, low price of free. That's right... I don't do this for PayPal donations or profit of any sort. I write this blog because I believe in great skating - artistic skating - and want to share stories about the sport's history, it's amazing skaters and areas of the sport you may not know enough about with as big of an audience as I can. All you have to do is "LIKE" it: http://www.facebook.com/SkateGuard. If you get 10 friends to like, I'll throw in a big hug. And if you get 100 friends, let's just as I'm "that kind of girl".. haha. You can also follow all of the fun along on Twitter at http://twitter.com/SkateGuardBlog.
Posted by Skate Guard Blog at December 08, 2013
Email ThisBlogThis!Share to TwitterShare to FacebookShare to Pinterest
Newer Post Older Post Home
"As a rule an author has one or two popular ways of contrasting the past with the present. He can treat the past as lying in comparative doleful ignorance, or he can explain that the past was infinitely superior to the day we live in. Of course, either method is the popular journalism of the moment, and in reality there is no sharp contrast, but a gradual transition which leads the past into the present." - Joel B. Liberman, Skating Club Of New York