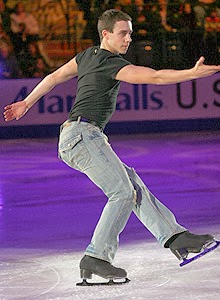 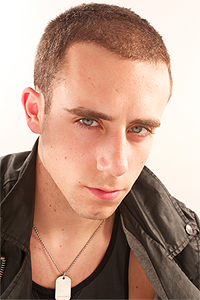 One of the most challenging aspects of competitive figure skating is having the determination and stamina to stick with it and continue to constantly grow. After winning the U.S. Junior title in 2006, Stephen Carriere has managed to do just that and then some. The following season he won both of his Junior Grand Prix assignments, the Junior Grand Prix Final and the World Junior Championships, handily beating a couple skaters you might have heard of in the process. No one fancy. You know, just Patrick Chan, Kevin Reynolds, Tatsuki Machida, Takahito Mura, Florent Amodio, Michal Brezina, Denis Ten...certainly no one you'd know! Since then, he's medalled at 2 Senior Grand Prix Championships, won the U.S. Senior bronze medal, competed at the World Championships, won the Ice Challenge in Graz, Austria and started off his season with a HUGE bang this year by finishing 2nd at the U.S. International Figure Skating Classic in Salt Lake City. Considering the depth of the men's field in the U.S. right now, Carriere has easily kept within the top 10 every year he's competed on the Senior level and is certainly one of many skaters that are in very real contention for berths on this year's Four Continents, Olympic and World teams. Not only a fabulous skater, he's also certainly not hard on the eyes. Just sayin. Just puttin' that out there. Hey Girl Hey! Stephen took time out of his busy academic and skating schedule to talk about not only his competitive career and goals for this season but music, coaching and much more:

Q: In addition to the U.S. junior title and five trips to the U.S. Nationals on a senior level (including a bronze medal in 2008), you've competed at the Four Continents Championships, World Championships, medalled internationally on the Senior Grand Prix and most recently, won a silver medal at the U.S. International Classic in Salt Lake City. What have been your favourite moments from competition over the years? Your proudest accomplishments?

A: Making the world team was a fantastic experience. It is something that only a select number of U.S. skaters achieve, so being on that team was amazing, especially in the context of the Evan and Johnny tie. There was a lot going on that year. My 2008 season stood out, but I primarily do not really have a favourite event in particular.


Q: Looking at this season, what are your ultimate goals for this year? How do you think you have most improved this year specifically?

A: I am looking forward to placing myself in the mix this year. In 2010, I was nowhere near, physically and emotionally, the position of being in the running for a spot on the Olympic team. Competing in the summer, and skating fairly well in Salt Lake helped boost my motivation to fight for myself more. It will be hard, but it’s exciting.

Q: You've skated to such a wide range of music throughout your career - everything from Louis Armstrong to classical music, film scores, The Pink Panther and Elvis Presley. Taking into account all of the competitive and exhibition programs you’ve ever skated, what are/were your favourites?

A: Each year I normally say this year’s program is my favourite, and I will say the same for my short and long this season but for much different reasons. When I contacted David and Tanith, I had a pretty concrete idea of what I wanted to do, but both of them added the expertise I sought them for and completely put new spins on the music I originally planned. For that, I really enjoyed creating the programs with them and I enjoy training them every day.

Q: What is the most beautiful piece of music or song you’ve ever heard?

A: I really love my show program I skated to this past season to Sam Cooke’s "A Change is Gonna Come". It came from such an emotional place at the heart of the Civil Rights Movement and just hearing it is amazing. I really enjoyed skating to it.

Q: I’ve talked with many skaters before about the difficulties of balancing elite level skating and a post-secondary education. I can't imagine how difficult that must be! You study corporate business at Boston College. What would be your dream business?  How do you find time to have a personal life and keep your stress level down while taking on so much?

A: I will be honest. My personal life is pretty nonexistent. During the week, I train pretty much all morning to early afternoon and then go to class. After that, I may have an hour or two more of training depending on the day, but then I proceed with two to three hours of readings, work, and papers. It can get very stressful, but at the same time I know it is a massive investment, so that keeps my head afloat. I think my dream job would be somewhere in the realm of consulting and incorporating my dedication to health and fitness in there somewhere. We will see.

Q: If you were backpacking through Europe and could only take 3 things with you, what would they be and why?

A: My phone, my wallet, and someone I love.


Q: Who is your favourite skater of all time and what skater do you most hope to emulate or aspire to be more like?

A: I do not aspire to be most like skaters in general. I enjoy following other athletes and find inspiration in people like Serena Williams, Manny Pacquiao, and Rafael Nadal more than a skater. I mean of course, I look to some skaters for motivation, but not often.

Q: You're coached by Suna Murray and have previously worked with Peter Johansson and Mark Mitchell in Boston as well as Priscilla Hill. What do you think the toughest part of coaching is and could you ever see yourself taking on that role?

A: Growing up, I have thought about that. Originally I thought the hardest part of coaching is seeing athletes come and go. Whether they move on to something or someone else, I thought that must be the hardest part. I realized with the help of Suna, that that is just the nature of the business. I find that watching the kids develop into good sportsmen and amazing people is most rewarding. The hardest thing I think of about coaching is working through incredibly hard times with the athletes, especially if the athlete is naturally a hard worker and a good kid. It kills to watch someone who wants it a ton and tries so hard not be able to break through a wall. The silver lining to that is that when they do, it is amazing. I have thought about coaching in my future and I have not ruled it out. I do want to be able to pursue other opportunities in my life. If I were to coach, I would try to lean more to the choreography side.

Q: What’s one thing about you most people don't know?

A: I’m addicted to working out. It’s because of the skating, but even on days I do not skate, I need to have clocked in at the gym.

Q: Where do you see yourself in five years?

A: All I am going to say is that I better have graduated from Boston College.

Skate Guard is a blog dedicated to preserving the rich, colourful and fascinating history of figure skating and archives hundreds of compelling features and interviews in a searchable format for readers worldwide. Though there never has been nor will there be a charge for access to these resources, you taking the time to 'like' on the blog's Facebook page at http://www.facebook.com/SkateGuard would be so very much appreciated. Already 'liking'? Consider sharing this feature for others via social media. It would make all the difference in the blog reaching a wider audience. Have a question or comment regarding anything you have read here or have a suggestion for a topic related to figure skating history you would like to see covered? I'd love to hear from you! Learn the many ways you can reach out at http://skateguard1.blogspot.ca/p/contact.html.
Posted by Skate Guard Blog at December 06, 2013
Email ThisBlogThis!Share to TwitterShare to FacebookShare to Pinterest
Newer Post Older Post Home
"As a rule an author has one or two popular ways of contrasting the past with the present. He can treat the past as lying in comparative doleful ignorance, or he can explain that the past was infinitely superior to the day we live in. Of course, either method is the popular journalism of the moment, and in reality there is no sharp contrast, but a gradual transition which leads the past into the present." - Joel B. Liberman, Skating Club Of New York