Interview With William and Christina Beier 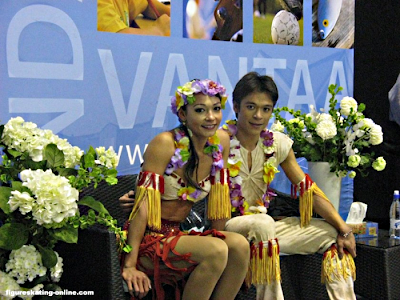 Skating is such an international language. Like love, its communication is cross cultural and is not limited to any one culture. No one knows this more than Christina and William Beier, the brother/sister ice dance that were born in the Philippines, became German National Champions and Olympians and along the way were risk takers, presenting vibrant programs using a variety of themes. Coached by Martin Skotnický, who worked with some of the world's most innovative ice teams such as Isabelle and Paul Duchesnay and Susanna Rahkamo and Petri Kokko, the Beiers also left the sport with a vibrant and memorable footprint left behind. Now having moved on to other chapters in lives, it was my pleasure to catch up with the daring dance duo and reflect on their successful skating career.

A: The highlight was definitely the Olympic Winter Games in Vancouver in 2010. The whole event with the atmosphere and all the athletes was just great! But also, the 2006 World Championships in Calgary was really nice. At that competition, we could significantly improve in comparison to our first World Championships in 2005. 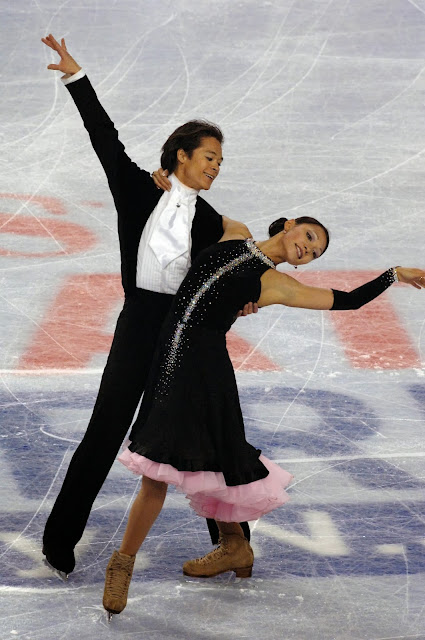 Q: You retired from competition after the 2010 Winter Olympics. How difficult was this decision and do you ever miss it?

A: Of course the decision was difficult, because the skating is our passion. We were also studying at the university and knew that we cannot do the sport for ever. So taking all facts together, we made the hard decision and wanted to focus on our study. After almost 4 years, we know that it was the right decision and we do not regret it. However, we always like to remember that time and sometimes also miss it.

Q: You were coached by Martin Skotnický, who worked with some of the most original and interesting ice dancers of all time, including Isabelle and Paul Duchesnay and Susanna Rahkamo and Petri Kokko. What was your relationship with Martin like and what made him unique as a coach?

A: We had and still have a very good relationship. We appreciate his very professional style of being a coach and also his creativity and technical skills. He likes to work in details and is a perfectionist but he was also taking care that in our private life everything is fine. I think these attributes make him to a world class coach. 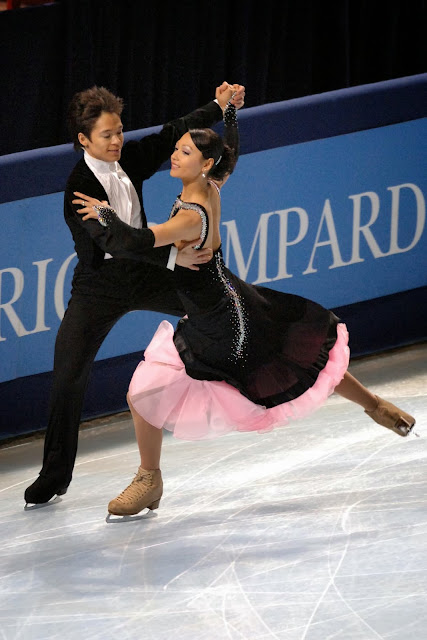 Q: What's your favourite song of all time?

A from Christina: "Stay" by Rihanna.

A from William: Tracy Chapman's "Baby Can I Hold You".

Q: If you were having someone over for supper, what would you cook for them?

A from William: A very nice steak with a French red wine


Q: You both were plagued by injury throughout your career as are many skaters. What are some simple things that every skater should be doing to try to avoid and work through injury?

A: First of all, if something hurts, take it serious and don't underestimate or force it. Otherwise later it will be worse and the pause will take longer. Secondly, during injury just stay relaxed and keep doing sports. But here also, don't force it or do never take medicines which kill the pain but not the cause.

Q: You were born born in the Philippines and moved to Germany in 1990. What was the culture shock of moving to a different continent and completely different culture like? What brought your family to Germany?

A: When you are a small child, the cultural shock is not that big. Also our father was a German, so we already had partly German culture in the Philippines. We didn't have problems with the language or with other children. I think the biggest shock was the cold weather in the winter.


Q: Nelli Zhiganshina and Alexander Gazsi, your former training mates and competitors have really emerged as THE German dance team to beat right now and certainly as strong contenders internationally as well. How do you see their chances looking forward to Sochi?

A: Regarding their performance on the ice and their achievements internationally, the chance to go to Olympics in Sochi is very high in my opinion. We wish them all the best that they will make it.


Q: Where did you come up with the idea for your Hawaiian original dance in 2009/2010? I loved it! How did you select music and make the dance authentic?

A: As very often, the idea came from Martin Skotnicky. We were then together looking for music. We look a little bit like Hawaiian people, so we thought it is a good idea. To make the dance authentic was not easy. We watched many movies and read books and magazines. We also were watching special Hawaiian dance movies. 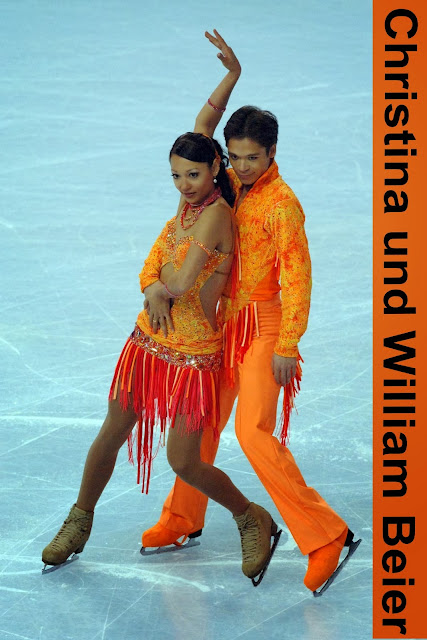 A from William: Christina likes to cook spaghetti and I love to eat these spaghettis.

Q: Since ending your skating career, what have you been up to? Do you ever think that you'd be involved in performing again?

A from William: Christina is soon finalizing the study in communication and design. I studied international management and now working in the industry and it's quite successful. I moved to China as an expatriate, have a wife and a baby and a lot of work. Our lives are now very far from skating as we are already in a new chapter. So the chance to get involved in performing again is almost zero.

Skate Guard is a blog dedicated to preserving the rich, colourful and fascinating history of figure skating and archives hundreds of compelling features and interviews in a searchable format for readers worldwide. Though there never has been nor will there be a charge for access to these resources, you taking the time to 'like' on the blog's Facebook page at http://www.facebook.com/SkateGuard would be so very much appreciated. Already 'liking'? Consider sharing this feature for others via social media. It would make all the difference in the blog reaching a wider audience. Have a question or comment regarding anything you have read here or have a suggestion for a topic related to figure skating history you would like to see covered? I'd love to hear from you! Learn the many ways you can reach out at http://skateguard1.blogspot.ca/p/contact.html.
Posted by Skate Guard Blog at December 13, 2013
Email ThisBlogThis!Share to TwitterShare to FacebookShare to Pinterest
Newer Post Older Post Home
"As a rule an author has one or two popular ways of contrasting the past with the present. He can treat the past as lying in comparative doleful ignorance, or he can explain that the past was infinitely superior to the day we live in. Of course, either method is the popular journalism of the moment, and in reality there is no sharp contrast, but a gradual transition which leads the past into the present." - Joel B. Liberman, Skating Club Of New York