Say It Ain't Sochi: The Elephant In The Room 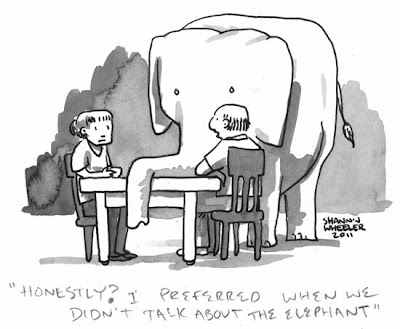 Not the shocking announcement that came out of NOWHERE today that 2010 Olympic Gold Medallist Evan Lysacek won't be competing this season. Another elephant.

The time has come to be a little real about the elephant that's been lazing in the room, grazing on negative GOEs and staring every skating fan who keeps abreast of the ISU's competition model in the face. It's the programs that are on the menu in eligible skating. It's what skaters need to accomplish in these programs to get the marks. It's objectively considering whether or not these programs and this style of skating is realistically marketable to new audiences and casual skating fans who may tune into NBC or CBC to watch a Grand Prix event on a Sunday afternoon. These are not the kind of viewers who necessarily know a triple flip/triple toe from a twizzle or even know live feeds exist (or go as far as to watch them), but they are TV audiences that keep skating on the air.

The recent Grand Prix Final was resplendent with some very high, high calibre skating but the real issue isn't with whether or not a skater eeked out a clean quad or triple/triple but with the programs themselves. Let's make up a skater. We'll call her Lesley Lutz. She's fabulous skating benchmark Janet Lynn with a mean triple lutz. She goes out, enthralls the audience with her emotional connection to her music, fabulous triple lutz and sensational spins. Mr. And Mrs. So-And-So who tune into CBC on a Sunday afternoon while their roast is slow cooking and just fall in love with her. They turn in the next week and even tell Mr. and Mrs. This-And-That at the grocery store how much they fell in love with Lesley Lutz's program. It moved them. This kind of thing used to happen. I'm Canadian. In Canada, you don't have to be a skating fan to know who Kurt Browning, Elvis Stojko, Liz Manley, Toller Cranston, Brian Orser, Shae-Lynn Bourne and Victor Kraatz or Jamie Sale and David Pelletier are. That's kind of stopped and it's not even a generational thing. If you go up to someone on the street, even someone of a younger generation, these are still the names you're going to get. You're not going to get as many Patrick Chan's or Tessa Virtue and Scott Moir's. You're not. It has NOTHING to do with their ability as skaters. We all KNOW they can skate their socks off. It all comes down to the kind of programs and competitions that are being marketed to fans and their emotional impact. It doesn't matter how great a skater you are if the vehicle itself is faulty.


Going back to the Grand Prix Final and talking about the kinds of performances on that menu, only a handful had that appeal to anyone watching. Maybe I'm watching a different show, but Yuzuru Hanyu or Mao Asada's performances didn't emotionally affect me in any way, shape or form, and I'm the kind of person who'll be moved to tears by a good power ballad or a puppy on a TV commercial. I don't think that's a healthy thing. There's the argument it's something as simple as the musical choices. There is something to that and I think next year when lyrics are allowed in mens, ladies and pairs competition, you'll see a little more variety (hopefully) in people's music and choreography choices. It's a lot easier to get behind someone skating to music they recognize than an Edvin Marton or Bond piece, for instance. There's more to it than that though. It's really the program structure that it takes to win a competition these days. I've talked a lot about the mathematical, cold approach to choreography that many of the world's top choreographers use these days but hey, you can't really say anything, it works. Sadly, the effect is about as emotionally impacting as a floor routine in gymnastics. The music is often merely there as background. The skaters who do put great choreography out there may be rewarded with deserving PCS scores or they may not. Therein the problem lies. An easy solution? There isn't one. Change is a start. The reality is that until the ISU finally recognizes the elephant, nothing will change and the only Lesley Lutzes will see won't be on any podiums or television broadcasts, they'll be buried in the standings after falling on three jumping passes trying to fit all of the crap that they need to into their programs to make it to the top. We already see it happen and it's not right and it's not OK.

So what happens next? Well, let's look into a crystal ball. Tatiana Volosozhar and Maxim Trankov win Olympic gold, despite their loss to Aliona Savchenko and Robin Szolkowy at the Grand Prix Final. Qing Pang and Jian Tong have as good as won bronze in pairs as some skating fans who only go by the results of the most recent competition they watch would have you believe, based on their result in Fukuoka. Meryl Davis and Charlie White and Tessa Virtue and Scott Moir are 1-2 in ice dance, Yuna Kim repeats as gold medallist in ladies, followed by Mao Asada and Hanyu and Chan are both men's medallists. That's one obvious scenario to anyone who can read graffiti on a rink wall. The elephant in the room thoughtfully chews on a hearty PCS score Mr. And Mrs. So-And-So are befuddled by.

Another is that someone else skates lights out and gives that emotional performance, that special Olympic moment with the same impact of Jamie Sale and David Pelletier's "Love Story" free skate that broke the flying camel's back and ushered in a new judging system. If that someone wins the gold medal, the elephant in the room stomps off in a huff and Mr. and Mrs. So-And-So rejoice and keep watching skating.

The third scenario - and call it a hunch - is the most likely one. Someone wins a medal with an error plagued program with no emotional impact over someone who skates fabulously and Mr. and Mrs. So-And-So stare at their TV in disbelief and disgust, just as they did when watching the 2002 Winter Olympics in Salt Lake City. Lesley Lutz is robbed. That's pretty much the only thing that could possibly change the IJS system at this point until someone finally succeeds Ottavio "Speedy" Cinquanta as ISU President. And you know full well that if someone with any brain in their heads or sense of marketing gets in there, that's exactly what they're going to do anyway. The sad truth is that it may take that sacrificial lamb with a lights out, awe inspiring program and performance being robbed on skating's biggest stage to change things. Never forget that the Winter Olympics draws out a lot more viewers than any live feed ever will, and what skating fans may tolerate, the general public and media won't. If you think they care about someone's level on their spin combination you're sadly mistaken. They judge what they see and rejoice in the best performance. Let's hope and pray it doesn't come to that sacrificial lamb scenario but my spidey sense has an uneasy feeling. But what do I know? Bring on the floor routines. That seems to be what a lot of people want. Not this big old flamer, and I'm not afraid to 'scream it from the rooftops'. Who's got a ladder?

But WAIT... there's more! If you call within the next 30 minutes, we'll throw in this link to the blog's Facebook page, which has news, features and videos that aren't on the blog for the low, low price of free. That's right... I don't do this for PayPal donations or profit of any sort. I write this blog because I believe in great skating - artistic skating - and want to share stories about the sport's history, it's amazing skaters and areas of the sport you may not know enough about with as big of an audience as I can. All you have to do is "LIKE" it: http://www.facebook.com/SkateGuard. If you get 10 friends to like, I'll throw in a big hug. And if you get 100 friends, let's just as I'm "that kind of girl".. haha. You can also follow all of the fun along on Twitter at http://twitter.com/SkateGuardBlog.
Posted by Skate Guard Blog at December 10, 2013
Email ThisBlogThis!Share to TwitterShare to FacebookShare to Pinterest
Newer Post Older Post Home
"As a rule an author has one or two popular ways of contrasting the past with the present. He can treat the past as lying in comparative doleful ignorance, or he can explain that the past was infinitely superior to the day we live in. Of course, either method is the popular journalism of the moment, and in reality there is no sharp contrast, but a gradual transition which leads the past into the present." - Joel B. Liberman, Skating Club Of New York