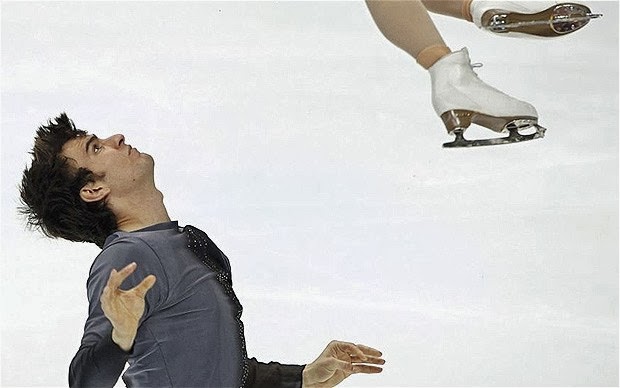 It's a bird! It's a plane! It's Meagan and Eric's triple twist! The competition couldn't have been any more exciting if it tried at the 2014 Canadian Tire National Skating Championships in Ottawa, Ontario. Just as the U.S. Championships celebrated 100 years, so did Skate Canada's national figure skating competition. I mean skating - NOT figure skating - new Skate Canada CEO Dan Thompson said "it's just a way of creating a more focused consistent brand message for Skate Canada as the governing body and as a Skate Canada event," in a recent statement to the Associated Press). Something something marketing something something 'brand'. At any rate, what happened on the ice was what the national competition that played a major role in selecting Canada's Sochi team is what really mattered. The event became a community affair, with free skating lessons being held in conjunction with a 15 minute outdoor event called "Canada Skates! 100 Years Of Champions" set up at Ottawa's city hall that featured some of Canada's best skating to choreography by Olympic Medallist and World Champion Jeffrey Buttle. I spoke to Canadian Silver Medallist and Stars On Ice cast member Shawn Sawyer on Friday, who told me he was "very excited about this first day of competition! Meanwhile I am performing in a small outdoor production at City Hall. We will be doing it four times a day for today and tomorrow and then will be the opening act for the skating gala on Sunday!" The competition itself was full of highs and lows for the hundreds of ridiculously talented skaters involved. Here are a few brief thoughts from yours truly on how it all played out:

Like the battle in Boston with Meryl and Charlie playing the role of The Untouchables, that's really how many skating fans looked at this competition for 2010 Olympic Gold Medallists Tessa Virtue and Scott Moir. And why not, really? They're Olympic Gold Medallists and World Champions... and now stars of their own reality show on the W Network... which a lot of people are already all jazzed about after only 1 episode. Things weren't absolutely smooth sailing - they were disappointed with their short dance and the twizzles in the free dance were off, but really they skated so well at the end of both days that these kind of details really seemed trivial. There's still work to be done if they seriously want to challenge Meryl and Charlie in Sochi and they have a short amount of time to do it - a medal is CERTAINLY in their future though. They faced some serious competition from Kaitlyn Weaver and Andrew Poje though, whether people recognized it as that or not - Kaitlyn and Andrew are really top notch skaters that deserve every little bit of credit sent their way. The real question mark and the battle came down to who would grapple onto that podium in that third spot. With a score of 170.64 to Gilles and Poirier's 164.52, when the dust settled it was the exquisite Alexandra Paul and Mitch Islam who nabbed the third spot... with both teams skating so well. Canada has come a LONG way in the ice dancing field compared to how things were 20 years ago and we can thank teams like Bourne and Kraatz, Dubreuil and Lauzon and Virtue and Moir for that. I think we're going to make a strong statement in Sochi, and I also think the world needs to really consider Weaver and Poje when they think about that statement.

When Kaetlyn Osmond won the Skate Canada Challenge leading into Nationals this year, I regained the hope that had wavered a little after a rocky start to her season. Kaetlyn's a skater with every bit as much natural talent as ANYBODY, and it was a joy to see her lay down the law when it counted, going clean with a triple/triple in the short and nailing 6 triples and earning a standing O in the free to win her second consecutive National title. Gabby Daleman really was amazing as well, showing such strength in her podium repeat. Amelie Lacoste skating her first clean short program at Nationals in years brought a smile to my face - I don't think a lot of people really counted her in when they should have. When you have skaters like Kaetlyn, Amelie, Gabby Daleman and Veronik Mallet all going clean in their short programs, that sends a huge message to the rest of the world that hasn't really been 'heard' in years - Canadian ladies skating is NOT in a sorry state whatsoever. We've got names, names, names sweetie dahling and they've got the goods. These aren't those inconsistent 'lean years' of the 90's and we can't keep typecasting Canadian ladies skating like than anymore. It's not a fair assessment by any stretch of the imagination.


I make no secret of my fandom of Meagan Duhamel and Eric Radford and why would anyone? They are really skaters that when they're on show to anyone just how incredibly talented they truly are. You can't put a price tag on what they go out there and do, and competing against wonderful teams on home ice like Moore-Towers and Moscovitch and Lawrence and Swiegers is no easy feat. It never has been for Canadian pairs skaters. We have such a rich tradition of pairs skating greatness here, and Nationals is really as difficult as any international outing for these pairs. What Meagan and Eric accomplished in Ottawa was nothing short of record breaking... literally. Their confidence and technical prowess just shined and their overall total of 213.62 broke the Canadian pairs title. Can they be the first Canadian pairs team since Jamie Sale and David Pelletier to stand on an Olympic podium? Yes, they absolutely can and I absolutely hope they do. Moore-Towers and Moscovitch also made a great case in Ottawa as well too, earning 209.44 points to put them closely behind Duhamel and Radford. You also really have to give some love to Paige and Rudi - they have a quiet confidence in their skating and some wonderful elements when they hit them... plus he's really a whole lot of pretty. The Canadian pairs boys in general are - can we have a calendar of hot Canadian men of pairs figure skating? I'd buy the bejesus out that!

The name everybody's lips is gonna be... Roxy... I mean Patrick. Patrick or "PChiddy" has been and is the big name in Canadian men's skating and I think with Sochi approaching everyone was so curious to see how he fared at the Nationals leading up to the Olympics where he is certainly an Olympic gold medal favourite. He certainly didn't disappoint, but he wasn't perfect either. Nailing a quad toe/triple toe in his short program, he went on to double his axel and lutz. If you put that performance up against what Jeremy Abbott did in the short in Boston, it just doesn't compare. Does that mean that Chan is beatable? He was always beatable! Anybody is. Does it mean he'll be beat? It all comes down to who lands those jumps over two programs when it counts in Russia and it always has. There's always been an attitude and concern among skating fans about "Chanflation" - inflated scores, especially at home at Nationals and there was as always a bit of that going on in this case, but he still demonstrated that the quality of his skating really is of that superior level that it does deserve marks - marks like that? I don't know. That said, he did nail quad/triple combinations in both programs and really... I think that shows you can jump. There's no denying that he is a fantastic skater and will still be a skater to beat when it comes down to the wire in Sochi. A lot of credit needs to be given to Kevin Reynolds. He didn't even HAVE a season coming into this event due to the boot problems that completely destroyed the momentum he wanted to ride after last season, but he fought like a trooper, even with issues on the quads that have really been his claim to fame and was able to secure that silver medal. It's really going to be intensive training over the coming weeks to pull in together in Russia though, but I have faith he can do it. Liam Firus was wonderful in claiming the bronze - a message that future is here. Another skater from the present to watch in the future: Nam Nguyen!

Skate Guard is a blog dedicated to preserving the rich, colourful and fascinating history of figure skating and archives hundreds of compelling features and interviews in a searchable format for readers worldwide. Though there never has been nor will there be a charge for access to these resources, you taking the time to 'like' on the blog's Facebook page at http://www.facebook.com/SkateGuard would be so very much appreciated. Already 'liking'? Consider sharing this feature for others via social media. It would make all the difference in the blog reaching a wider audience. Have a question or comment regarding anything you have read here or have a suggestion for a topic related to figure skating history you would like to see covered? I'd love to hear from you! Learn the many ways you can reach out at http://skateguard1.blogspot.ca/p/contact.html.
Posted by Skate Guard Blog at January 12, 2014
Email ThisBlogThis!Share to TwitterShare to FacebookShare to Pinterest
Newer Post Older Post Home
"As a rule an author has one or two popular ways of contrasting the past with the present. He can treat the past as lying in comparative doleful ignorance, or he can explain that the past was infinitely superior to the day we live in. Of course, either method is the popular journalism of the moment, and in reality there is no sharp contrast, but a gradual transition which leads the past into the present." - Joel B. Liberman, Skating Club Of New York