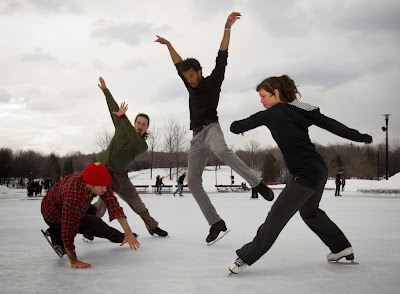 Founded in 2005, Le Patin Libre started as a small collective who first gave demonstrations of its artistic skating performances on frozen ponds in Quebec. It's first show was in Saint-Jean-sur-Richelieu in early 2006. Since then, they've presented Fringe type skating and performance art pieces that range from an adaptation of "The Pied Piper Of Hamelin" tale transcribed onto the ice to a Christmas story with a violin soundtrack composed by one of the troupe's members to extreme and "tap" skating shows in non-traditional venues not just in Quebec but in Europe as well. They're skating's true nomads, the Vianne Rocher's of the frozen stage. As in the movie Chocolat, "the clever north wind was not satisfied. It spoke to Vianne of towns yet to be visited, friends in need yet to be discovered, battles yet to be fought..." The story of Le Patin Libre is full of new people, places and things and a journey that's really just getting started.

On their website, Le Patin Libre explains "What started as a little spontaneous explosion is now refined into an intelligent artistic project. 'The new skating style' slowly became a new performance art form in its own right.  At the base of our work, there is one great question: 'what is skating?'. Until now, our research projects always bring us back to the same thing: glide. Glide is the possibility to imprint movement on immobile bodies. It is the uniqueness of our dance. It is the magic we play with, until it becomes a vertigo, for our own enjoyment and the one of our public."


Le Patin Libre's most recent touring venture is called Skaters Anonymous. The work was originally performed under the working title "The Rule Of 3" in 2012 and January of 2013, but is now being exhibited as a touring production. It was debuted by the group in Montreal in March of 2013 then later the group traveled to Berlin, Germany in July of this year to present their work there. The group has travelled, studied and performed in England and France and the group even traveled to the small French islands of Saint-Pierre-Et-Miquelon to exhibit their non-traditional skating/performance art pieces.

The group's choreography and performances promote strongly the belief that skating can truly be presented as contemporary dance to more diverse audiences than those who would typically frequent ISU eligible competitions and mainstream touring productions like Stars On Ice and Disney On Ice. Group founder and performer Alexandre Hamel explains that Skaters Anonymous is "is a heartfelt ode to the beauty of the strange, to the grace of the wounded and the victory of the extraordinary over the banal." The dark comedy on ice Skaters Anonymous depicts the story of 3 men following a therapy intended to rid them of an even stranger addiction. The piece satires their past lives as lycra-clad ISU eligible competitive figure skaters and the 75 minute long piece certainly intends a strong message of the importance of individualism. "We are not figure skaters anymore," explained Hamel.  "This is really important. I want to dissociate our work completely from figure skating. We use the same medium but what we do is completely different. Intentions are different. The attitude is different. The esthetics are different. Our public is different. We are to figure skating what contemporary dance is to social dance. I also want to completely dissociate us from the 'on ice' show business. From Disney On Ice to the most "artsy-looking" project.... We are out of there. Artistry and creativity IS NOT important in competitive figure skating. In competitive figure skating, what is important is to execute perfectly technical element in a pretty outfit, while smiling and showcasing a style that will please 9 judges, often with no artistic or academic background. Choreography is barely a decoration, the icing on the cake. It is not the substance." Hamel also pointed out the respect he does have for competitive figure skating. "I have lots of respect for that. After 15 years of figure skating, I know how tough it is."

Hamel shared his views on professional skating. "Artistry and creativity IS NOT important in professional figure skating. In the 'on ice' show business, what is important is to be sexy, romantic and please the aging audience who likes that kind of entertainment. This word is important: ENTERTAINMENT. Again, I have lots of respect for that. The lives of most people are miserably grey and boring. Thank God some flying ice-nymphs in sparkly outfits and some macho hip-thrusting studs can get us out of there for 2 hours for the price of a ticket! Artistry and creativity is the very base of what we are doing, with Le Patin Libre. We don't care if you like or not what we do. We don't care if you don't clap. We don't care if no bank wants to sponsor us. We don't care if what we do is can't be formatted into a reality-TV show. We are exploring how human bodies can move using ice and blades. And yes, it is not pretty, sometimes." Hamel is by no means shy: "We also have things to say. And yes, they offend some people. But we are not there to entertain them, we are there to do what we are compelled to do by our very nature: real art. And we use our talent as ice skaters to do so."

Le Patin Libre is confidently marketing what they are doing well and have partnerships with Arts sur glace and Le Conseil des Arts et Lettres du Québec in Quebec and Sadler's Wells Theatre in London. They continue to study dance and theatre throughout their travels to improve their craft, have worked with skating greats Gary Beacom and Paul Duchesnay, dueled on ice with Shawn Sawyer and are really doing some amazing things on skates. Fringe Festival/busker style skating? Hostels with backpacks filled with granola and figure skates? Skaters not afraid to take risks and be big, bold and brave on impromptu outside and plastic rinks? Sign me up!

THIS is what we need more of. This is the kind of stuff that makes me beam. This is what we as skating fans NEED to be encouraging and creating. If your skating or your child's skating or your student's skating isn't fulfilling them, encourage them to create their own venue and opportunities like Le Patin Libre. Just because you're 16 and can't land that double lutz or get out of Novice or qualify for Sectionals doesn't mean that you have to stop skating. What it may mean is that there's more to your skating than a 9th place result or a failed silver dance test. It might mean that there's another direction; another dimension so many of us can't seem to conceive. It's not laid out for us or made as accessible as competitive skating. It's a road that you not only have to explore but in many instances create yourself. And all it takes is your love for the sport, some good choreography, good ideas and the drive.


Legendary Japanese author Natsume Sōseki once wrote that "art begins with the expression of the self and ends with the expression of the self". This quote is especially true to skaters like Le Patin Libre's troupe members. They learned to create art by skating within the structured system we all have a love/hate relationship with and ended that chapter by once again rediscovering their selves and a deeper art through this new chapter. I hope to see more and more skaters make their own opportunities going forward. It's not about making money, it's about making art. And all that art on ice TRULY requires is a pair of skates, a frozen stage and an audience. We must not forget that. It's the essence of the magic of skating. The magic of no rules.

If you enjoyed my feature on Le Patin Libre, be sure to always check back for more skater interviews and writing about everything under the sun in the skating world. There is also a Facebook page connected to the blog where all blog articles and interviews are shared - as well as current skating news, photos and videos of amazing skating. Give it a "like" at http://www.facebook.com/SkateGuard. You can also follow me on the Twitter at http://twitter.com/SkateGuardBlog. I love talking figure skating and would love to talk about the sport with you!
Posted by Skate Guard Blog at January 04, 2014
Email ThisBlogThis!Share to TwitterShare to FacebookShare to Pinterest
Newer Post Older Post Home
"As a rule an author has one or two popular ways of contrasting the past with the present. He can treat the past as lying in comparative doleful ignorance, or he can explain that the past was infinitely superior to the day we live in. Of course, either method is the popular journalism of the moment, and in reality there is no sharp contrast, but a gradual transition which leads the past into the present." - Joel B. Liberman, Skating Club Of New York