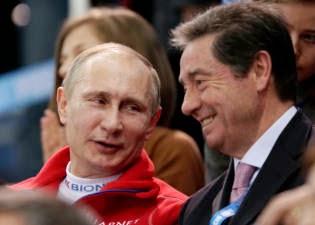 Those of you who read the blog know that I am no loyal supporter or dedicated sheep to International Skating Union President Ottavio Cinquanta. All you have to do is read You're A Mean One, Mr. Cinq. From illegally putting forth a motion to extend his own term in office (that was a success by the way) to dismissing every single protest regarding the IJS judging system he was instrumental in putting into place or the judging of specific events (including the whole Sochi ladies result debacle), to say he hasn't really proved to have figure skating's best interests at heart is the understatement of the century. Running the ISU almost like a dictatorship, it really appears as figure skating's future is to be his way or the highway.

In the United States Of America, presidents are allowed to serve two consecutive four year terms if fortunate enough to be democratically elected by the people of their country in succession. It's crazy to think that in comparison, ISU President Ottavio Cinquanta has comparatively been in power for twenty years, the equivalent of five consecutive four year terms in the Oval Office. Imagine George W. in there that long. I don't think the liquor store sells enough rum for that. JUST SAYIN.

A lot can change in twenty years, and a lot has. In the early years of his ISU presidency, Cinquanta was praised widely for his introduction of prize money at ISU eligible competitions and creation of the Champions Series (now called the ISU Grand Prix Of Figure Skating), which organized the many prestigious, pre-existing fall invitational competitions into a series of events that earned competitive skaters money to help offset their training expenses. In turn, the prize money at ISU eligible or "amateur" competitions helped destroy competitive professional skating "as we know it", as there was the same or a greater incentive to stay active in eligible competition for years longer than previously done. Fewer professional opportunities meant fewer creative opportunities for skaters. The importance of keeping those triples instead of progressing as an artist and performer certainly made a difference in the climate of the skating world - and the quality of the entertainment skating fans got to see in televised events. But I digress...

Things changed in 2002, when everything came crashing out into the open at the Salt Lake City Olympics when the judging scandals of the sport that had been going on for years finally got to the point they couldn't be ignored anymore by skating insiders or the media. Jamie Sale and David Pelletier and Jelena Bereznaya and Anton Sikharulidze's "shared gold" quickly made way for a new judging system that is not without great merits or blatant flaws. The one that has been consistent through the good, bad and the ugly figure skating over the last twenty years has been Cinquanta's iron fist rule.

Cinquanta, who has a background in speed skating, has shown little affection for the artistry of figure skating. What was once a thriving sport full of controversy, charisma and creativity has, with the new IJS/CoP system that Cinquanta fiercely defends, dropped in popularity drastically. We're talking about a man who rules with an iron fist and illegally requested that the skating union extend his term until 2016, even though the governing association's own rule stated he was age ineligible to run for re-election. In a sport that's full of age regulations and books of rules, he certainly didn't mind breaking them himself. Where was Cinquanta during the judging scandal of 2002, you ask? Oh, I don't know.. "still reigning", while Marie-Reine Le Gougne and Didier Gailhaguet faced three year suspensions. However, Le Gougne was allowed to continue her involvement in the sport in no time, running for presidency of the FFSG (French federation) in both 2006 and 2010. And where's her buddy, Didier Gailhaguet? He's president of the FFSG right now!

Where are we at now under Cinquanta's leadership in 2014? We've got angry skaters, angry coaches, angry federations and confused fans. I don't know about you, but you shouldn't have to have a freaking math degree to choreograph ANYTHING, or understand it on television. After dismissing a petition signed by over two million people requesting the ISU address the results of the 2014 Winter Olympic ladies competition and saying that the Korean Skating Union's letter of protest better have evidence (of course it has evidence - there are dozens upon dozens of fair criticisms and analysis of the result out there), he recently circulated a letter of 'personal opinions' to all ISU members for consideration that he strongly urged voting members to consider supporting and voting into ready before the 2016 ISU Congress. They included eliminating the short program because "no other sports are based on two segments", making programs in all four disciplines last the same amount of time and keeping judging anonymous. The letter in its entirety can be found here and sounds positively like the ramblings of a loon, if you ask me, especially his defense of anonymous judging. There's this thing called accountability the rest of the real world uses. Petitions over anonymous judging have been signed by people from Brazil, Russia, Ireland, Jordan, Korea, the United States and Israel. All that's missing is a penguin. And I'm sure if there was a skating loving penguin out there with some WiFi, they'd be right on that. I can't see "Speedy" Cinquanta rushing to make it right though.

In my interview with two time Olympic Gold Medallist and skating icon Dick Button last month, Dick expressed his concern with both the fact that speed skating and figure skating are both being run by the same organization and the IJS judging system: "The first thing is to split up the ISU. Both speed skating and figure skating should be in separate federations and not connected to each other. The next thing to do is to get back to common sense and not reward a fall with more points. It's called NOT REWARDING FAILURE! It's a challenge but they should not give any points if you miss it or fall down on it. This is now a point system based on numbers." I'm sorry, but it's pretty hard to explain to the casual fan why a skater who fell twice and made other mistakes won by a landslide. It's those casual fans without math degrees that fill the seats and stay on that channel and watch an entertaining sport instead of move on to the next one. Casual fans are what made the sport. Growing up skating myself and being passionately in love with the sport as a fan, I can't tell you how many times I'd sit down with family and friends who casually enjoyed being entertained by the drama of "6.0 competition" and the entertainment of professional competition. These days even my dearest friends have a hard time feigning interest in a sport they just don't know anymore. And it's not that there aren't positives. It's great to see the "in between" things like footwork and spins getting attention, but if everyone has to do the same ones to have a small piece of the mathematical "Pi", we've lost the essence of what drove people to the sport in the first place. The stories, the individuality, the choreography and the excitement of high level competition are lost WHEN EVERYBODY IS DOING THE SAME DAMN THING. It's like the movie on "Groundhog Day" on ice, only instead of Bill Murray waking up in bed every morning to the alarm clock every day playing the same song, we as fans of the sport are treated to the same "choreography", music, awkward footwork sequences and systematic spins at every turn.

The reality of the situation is that things are not working the way they are, and if the person in charge of it all is not willing to cooperate and make positive change within the sport, we are not going to see any until the next person steps up. Let's just hope Cinquanta doesn't ask for another extension.

That's where you come into play. Contact your ISU representative and address your concerns about Cinquanta's leadership and urge them to take action and save the short program and demand accountability and judging that isn't anonymous. Share your opinions and have your say with the people that have voting power and the right to commence impeachment proceedings, because these people have the power to enact real and quantitative change in skating's future:

As U.S. President Theodore Roosevelt once said, "In any moment of decision, the best thing you can do is the right thing. The worst thing you can do is nothing." Whatever your opinion may be, make it heard and make it heard directly to those who can do something about it. The elimination of the short program and continuation of anonymous judging will only ensure that figure skating's livelihood and future careens closer to that proverbial cliff.

If you enjoyed this feature, the best advice I can give you is to take just a moment of your time and click through to this blog's Facebook page at http://www.facebook.com/SkateGuard and "like it" - you'll end up with daily figure skating news, videos and interesting articles right in your Facebook news feed, as well as new content and interviews on this blog as they happen. I'm also just in love with the Twitter - it's so fun! You can tweet me at http://twitter.com/SkateGuardBlog anytime you feel like talking about skating. I'll answer any question, big or small... From "Why are we supposed to care?" to "Who did that skater's hair?" Also, if you have any suggestions or questions based on anything you read, feel free to comment on the articles and interviews themselves, or if you prefer, shoot me an e-mail at N_N_23@hotmail.com.
Posted by Skate Guard Blog at March 30, 2014
Email ThisBlogThis!Share to TwitterShare to FacebookShare to Pinterest
Newer Post Older Post Home