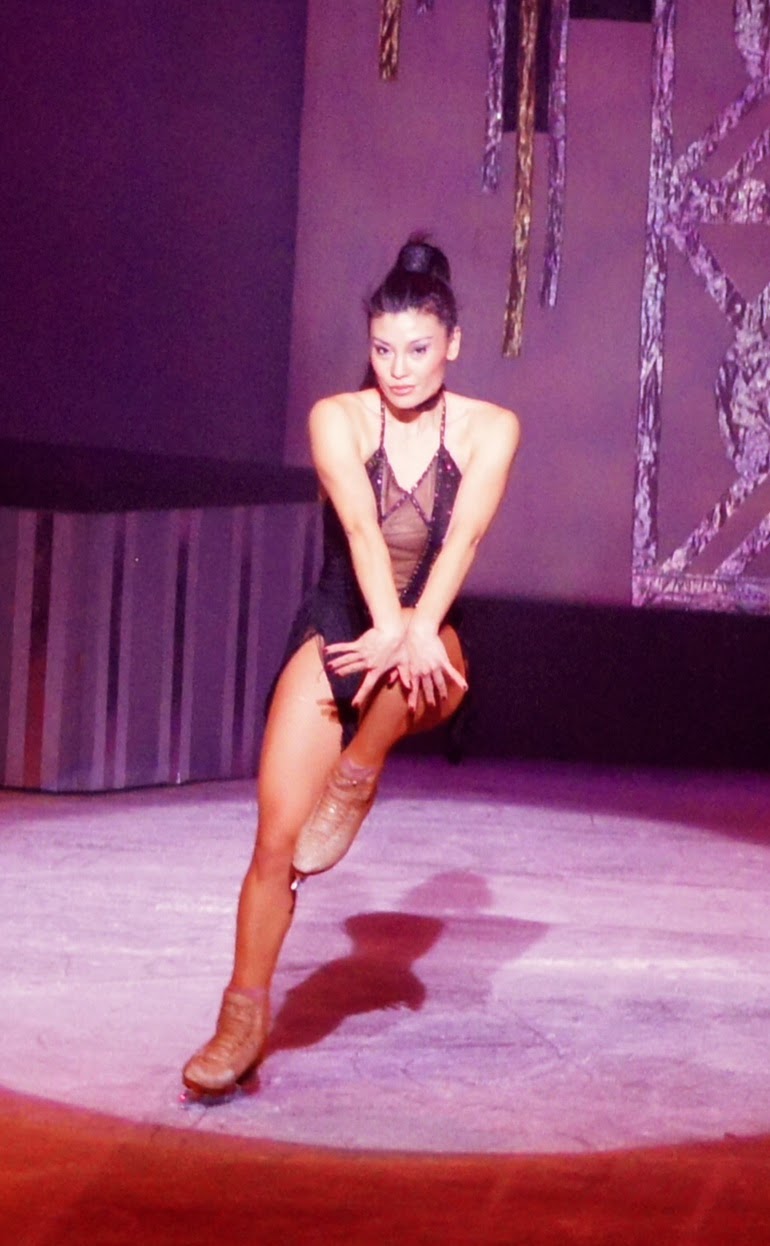 In 1990, then twelve year old Joanna Ng participated in an interpretive skating competition that complemented the usual fare at Skate Canada International. She skated an elaborate program that depicted the story of a young Vietnamese woman brought to North America and abandoned there, forced to dance herself into collapse to support herself and WON that competition against skaters nearly twice her age. The prodigal young American skater won the U.S. junior silver medal and went on to later represent a different country - Taiwan - at the World Figure Skating Championships. Turning to a professional career at a young age, Ng continues to skate professionally over twenty years later, recently performing with Broadway On Ice. Joanna took the time from her very busy schedule to reflect on her career, talk about skating 'then' and 'now' and so much more in this fabulous interview: 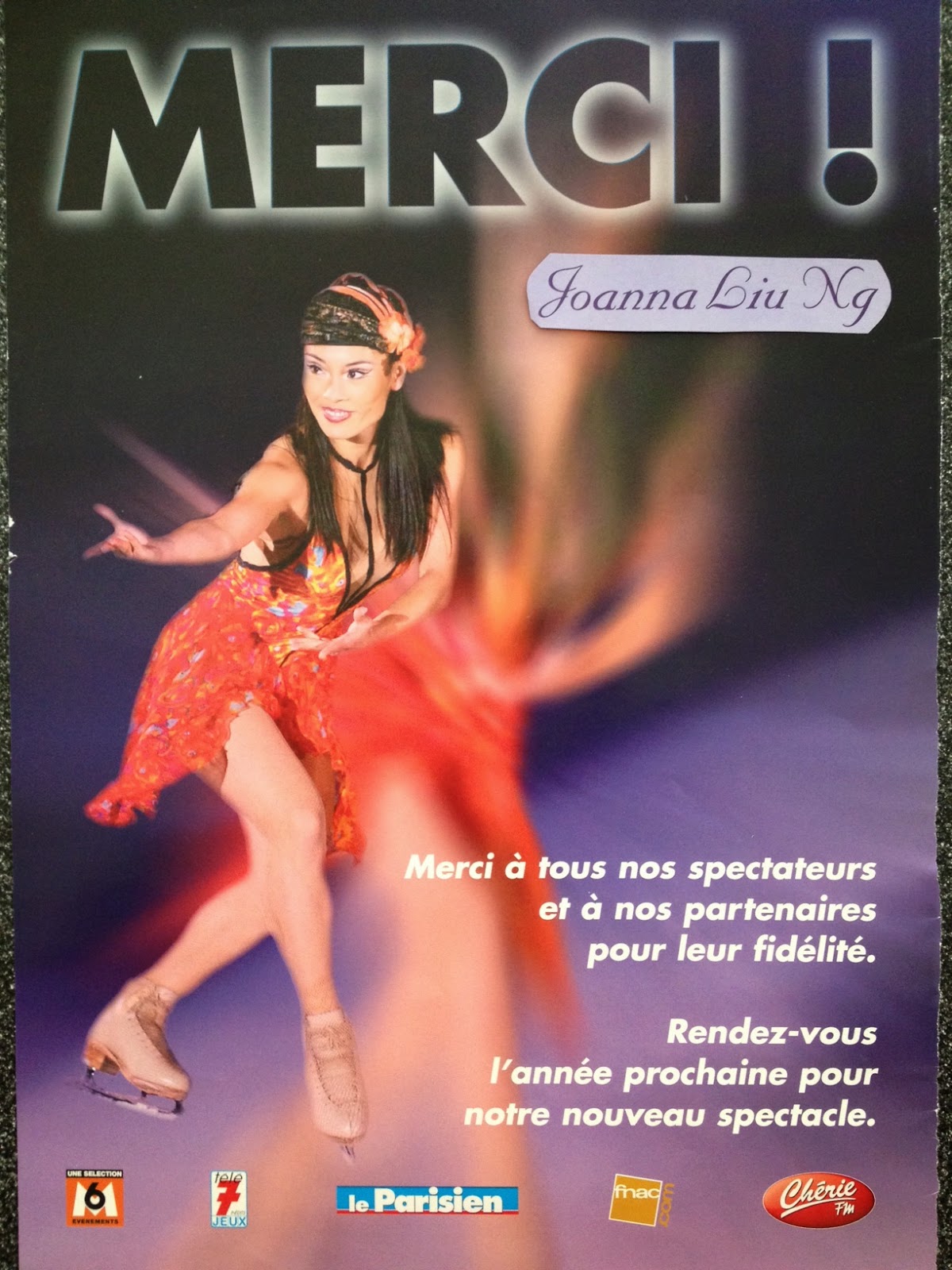 Q: In touring with companies like Holiday On Ice and Disney On Ice, what are your favourite and most interesting memories? What was the most exotic country you visited?

A: There are so many wonderful memories while doing both Disney On Ice and Holiday On Ice, however, as a performer my most memorable time on Disney On Ice was skating for an audience at the Bulls United Center Stadium in Chicago for a full 20,000 seat audience that wrapped around backstage. That was a very enthusiastic ovation. In fact, all the ovations around the world were the most unforgettable and every time it happened, Sarah Kawahara’s voice would chime in to remind me how exquisite it was and to absorb them because there was an expiration date. Doing the Today Show with Katie Couric and Matt Lauer for publicity was neat, especially since it was in the midst of winter at 5 AM and our costumes were revealing. There's also the time I canoed down the Chicago River during lunchtime, later meeting an actual Native American Princess. For Holiday On Ice, it was performing ten to fifteen shows a week cleanly for nearly five months straight. I was very proud of that accomplishment. The most exotic country I visited was Israel with The Spirit of Pocahontas and the most exotic travel was with Willy Bietak Productions on the inaugural ship Oasis Of The Seas. We cruised on the largest cruise ship in the world from Turku, Finland to Fort Lauderdale, Florida. The ship was still being built during the crossing and at one point we stood at the top of the cruise ship to witness it go under the Great Belt Fixed Link Bridge in Denmark, clearing it by only 2 feet that looked like inches. As the lead role in Disney On Ice: The Spirit of Pocahontas, it was one of the most worthwhile and fulfilling experiences I have had, and my appreciation for that time continues to grow.


Q: You represented both the U.S. and Taiwan internationally. How did this come to pass and what were the differences in representing both countries?

A: It was a great honor to have had the opportunity to compete for two different countries. Representing Taiwan came about because my grandfather, who was a Senator of Taiwan, was gravely ill and wanted to see me skate at the World and Olympic Championships. It was a wonderful experience that might not have happened otherwise. Skating for the United States on an international forum was the biggest honor, simply for its recognition and selection to be on their team.

Q: You won the Interpretive competition at Skate Canada in 1990. What was this competition like and do you think there needs to be more competitions with an artistic focus?

A: Yes, skating is not just an athletic sport, but also an art. Skate Canada Artistic was an elite outlet for performance, theater, art depicting art, and innovation. More competitions with an artistic focus would encourage creative talent thereby enrich the sport. For me, it was an opportunity to showcase my talent at an international level. At twelve years old, I was competing alongside some of the greats of the time: Mark Mitchell, Holly Cook, Calla Urbanski and Rocky Marval to name a few.

Q: What are the rewarding and most eye opening parts of coaching?

A: To watch a skater develop athletically, mentally, emotionally, and spiritually through their journey to becoming their best.

Q: Who excites you in ladies skating today?

A: There are so many, but Polina Edmunds and Julia Lipnitskaia really stand out.

A: In my opinion, a good skater gets his or her job done, however, a legendary skater is an evolutionary skater with a competitive mindset who makes an impact in the sport. They have technique and the aptitude to evoke authentic emotion through movement that the audience and judges can connect with. It’s athletic, artistic, innovative, inspiring, and ubiquitous through time.

Didn't you just LOVE this interview with Joanna? Well, don't just stand there! In order for this blog to reach a wider audience, I could sure use a little help. All you have to do is "LIKE" the blog's Facebook page at http://www.facebook.com/SkateGuard for instant access to all of the new blog articles, features and interviews as they are made available. I also share daily updates and headlines from the skating world, videos and much more that's not here on the blog, so if you love figure skating as much I do, it would really be rude not to get on that inside edge! You can also follow all of the fun along on Twitter at http://twitter.com/SkateGuardBlog. If you know someone who loves skating, tell them! It's all about getting a dialogue going on! Fabulous skating is too fabulous to keep secret. Am I right or am I right?
Posted by Skate Guard Blog at March 21, 2014
Email ThisBlogThis!Share to TwitterShare to FacebookShare to Pinterest
Newer Post Older Post Home