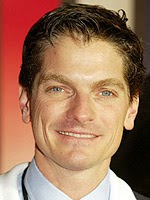 Do you know what's better than an interview with skating legend Paul Wylie? An interview with skating legend Paul Wylie FROM the Iceberg Palace at the 2014 Winter Olympic Games in Sochi, Russia. Paul's story is really a lesson in perseverance. Balancing a competitive skating career with his studies at Harvard University and Harvard Business School, Wylie played double duty early in his career, winning the 1979 U.S. Novice title, the 1980 Junior pairs title with Dana Graham, the 1981 U.S. Junior Men's title and the 1981 World Junior Championships early in his career. He slowly climbed the ladder in the senior ranks and in 1988, won the silver medal at the U.S. Championships, earning his spot to represent the U.S. at the 1988 Winter Olympic Games in Calgary, Alberta, where he placed in the top ten. The following four years, Paul medalled at the U.S. Championships but despite strong international showings was unable to have the performances he wanted at the World Championships. Written off by far too many, he went to the 1992 Winter Olympic Games in Albertville, France as an underdog and stole the show, winning the silver medal and defeating top skaters of the era such as Petr Barna, Christopher Bowman, Kurt Browning and Elvis Stojko. He received the U.S. Olympic Spirit Award that same year and turned to the professional figure skating world, having one of the most outstanding and remarkable professional careers that anyone's really ever had. He toured full time with Stars On Ice, performed in shows around the world and won countless professional competitions: The World Professional Figure Skating Championships, Challenge Of Champions, U.S. Pro-Am Championships, U.S. Open, Ice Wars, Miko Masters, among countless others. Now a successful coach, business owner and father of three, Wylie took time away from all of the action in Sochi to talk to me about his "amateur" and professional careers, working with coaching legends Carlo Fassi and John Nicks, his favourite performances and much more in this interview that you'll absolutely love to death. I promise!:

Q: Your career is really so remarkable. At the same time that you were competing on such an elite level, you were busy studying and graduating from Harvard University. I couldn't even imagine the pressure of both at the same time but you did it, winning 5 medals at the U.S. Championships and having the skates of your life at the 1992 Winter Olympics in Albertville, France and winning the silver medal. What did that moment mean to you then and what does it mean to you today?

A: Well, thanks for your kind words. I was not expected to be in the top three in Albertville, having never finished higher than ninth in Worlds and making the team by one tenth of a point.  So first and foremost, winning the silver medal was an amazing finish to my amateur career, which had its share of highs and lows. I had been labelled as a practice skater, someone who couldn't deliver at worlds, inconsistent, etc. In the U.S. Nationals wrap-up from 1992, one prominent reporter referred to me as a "pathetic figure in the sport." So the medal was not only an incredible personal achievement, but vindication for me and for those who supported me. How has it changed for me as I look back on it today? In the context of my life now, it is an incredible reminder of a time when I felt God's grace in the most powerful way. It also feels impossible to imagine reliving that moment.


Q: Your professional career was and is in my opinion just as much if not more incredible that what you accomplished in winning that medal in Albertville. You won just about every professional title known to man - the World Professional Championships, Challenge Of Champions, Miko Masters, Ice Wars and the U.S. Open while touring full time with Stars On Ice. What are your proudest moments from your professional career?

A: Again, thank you. I loved skating professionally! It was so freeing to be able to create programs in the pro context and that was a vibrant time in the sport. I loved competing with the greats of the sport. My proudest moments and best skates would be the World Challenge Of Champions event in L.A. when I skated first and clean to Miss Saigon, winning against Petrenko and Boitano. This was the first time Brian Boitano had lost a pro event ever.  I landed a really nice triple axel and when I watch it, the music was alive in me that night. Secondly, winning the World Pro in 1993. Landover was a Wimbledon-like experience, and I feel sorry for skaters today that they can't experience it. Thirdly, when I did "Carmina Burana" in West Palm Beach for Skates X 2, paired with Caryn Kadavy. The lights went out and it was the best I ever skated that intense program.


Q: Before working with Evy and Mary Scotvold, you were coached by both Carlo Fassi and John Nicks - together a who's who of coaching greats. You even had a great pairs career. What did you learn most from working with each of these coaching phenoms?

A: Carlo and Christa had me from the time I was eleven years old. Carlo was very strategic. He was brilliant at figuring out what had to happen to make a result happen. I also think he created the most incredible environment for skaters to improve. It was both artistically and athletically supercharged and we were encouraged to develop style and interpretation, as well as jump technique and figures.  I loved his sense of knowledge of history, world politics and his sense of humor, as well. Mr. Nicks taught preparation to the nth degree. Every element in the short program was combed over and polished. Nothing went in the program that wasn't secure and consistent. His team included Wanda Guntert, his wife Yvonne and Terry Rudolph, each responsible for pieces of the puzzle: jumps, spins and choreography. Terry Rudolph was amazing and a fantastic influence on our style as a pair, choreographing every detail. Mr Nicks also encouraged us before our first international event in St. Gervais to do one very important thing: make friends among our peers.


Q: As you head to Sochi and look at the current state of competitive figure skating, would you or would you not have wanted to skate under this judging system and in this era if you could change the clocks?

A: I think it would have been interesting to have been a skater under this system. It probably would've driven me crazy too.


Q: All of these epic programs - Schindler's List, JFK, The Untouchables, Apollo 13, On The Waterfront, This Is The Moment and so many more. If you had to pick a favourite program that you've skated, what would it be?

A: I think "JFK" and "Schindler’s List". Both really pushed me to be in the moment every skate.

Q: You're a father of three children now and still find time to stay involved in the sport through coaching, performing and An Evening With Champions - to the delight of your fans. What is the biggest challenge of 'doing it all'?

A: The biggest challenge is the travel and trying to schedule and organize it all. That, and keeping business going when I am not at home as much as students would like.

A: I have four. Janet Lynn... the edges with effortlessness, the transparency of her expression that came from a heart of faith and moved all who watched her to the core. Also, her soft interpretive style which did not negate her athleticism. Irina Rodnina, for her speed, power, training and longevity. I watched her skate at the Broadmoor and it was two crossovers to full speed and full ice coverage. Scott Hamilton... he is entertainment personified. He has clean, meticulous edges. You should have seen his figures! His sense of humor on the ice drew everyone in. I watched his program every night from behind the curtain and never tired of watching him, especially The Wizard of Oz, Hair and In The Mood. He was tough to compete against! And, of course, Michelle Kwan.

A: I really drink too much Starbucks.

Q: If you could do it all again, is there anything you would do differently?

A: I would have prepared differently for the 1989-1991 seasons, especially the preparation for Worlds and balancing priorities of school versus skating.

Q: What's the biggest lesson that you have learned through your involvement in skating?

Skate Guard is a blog dedicated to preserving the rich, colourful and fascinating history of figure skating. Over ten years, the blog has featured over a thousand free articles covering all aspects of the sport's history, as well as four compelling in-depth features. To read the latest articles, follow the blog on Facebook, Twitter, Pinterest and YouTube. If you enjoy Skate Guard, please show your support for this archive by ordering a copy of the figure skating reference books "The Almanac of Canadian Figure Skating", "Technical Merit: A History of Figure Skating Jumps" and "A Bibliography of Figure Skating": https://skateguard1.blogspot.com/p/buy-book.html.
Posted by Skate Guard Blog at March 02, 2014
Email ThisBlogThis!Share to TwitterShare to FacebookShare to Pinterest
Newer Post Older Post Home