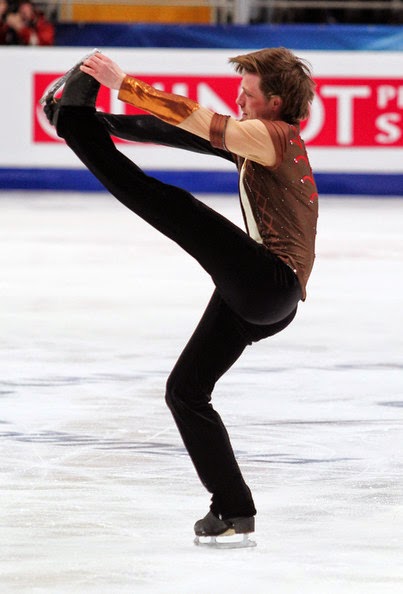 Justus Strid started his competitive skating career in Sweden, medalling on the national level in his country of birth, but made a major career change by moving to a new country. His difficult decision paid off and he is now a seven time Danish Champion and four time European and World competitor. The talented Taurus from Denmark was kind enough to take the time to talk to me about his career to date, being coached by his own brother, his future in skating, his thoughts on the way skating is currently judged and much more in this fabulous interview:

Q: Your skating career so far has scanned over ten years and included four trips to the European and World Championships, medals in international competitions like the Nordic Games and Golden Spin Of Zagreb and most importantly, an incredible SEVEN consecutive Danish Championships. What are you proudest of and what moments have been the most special?

A: I have always wanted more and only just recently realized that just getting to the big championships is a great achievement. I have started to feel proud of realizing my childhood dream of competing with the best in the world. Maybe my proudest moment has to be Worlds in Canada in 2013 after my short program when I qualified for the free and skated the short of my life.

Q: You were actually born in Sweden, medalled on both the junior and senior levels as a skater in that country and then moved to Denmark in 2004 and began skating for that country in 2008. Culturally, what was the biggest culture shock of moving to a new country and what are the main differences in the skating programs in both countries?

A: The people are mostly the same. I mainly chose to move there because of the coaches Henrik Walentin (a former worlds competitor from Denmark) and Julia Sandsten and they really worked a lot to make me better as a skater. I also had the choice of Paris and training with Annick Dumont and Pierre Trent who I worked with a lot in summer camps. I did two weeks in their club but did not fit in so I chose Hörsholm, Denmark. The big difference for my skating here is the the ice hockey isn't as big so I get more ice time which is a big problem in Sweden.

Q: You recently placed thirty first at the 2014 World Championships in Saitama, Japan. What are you most proud about your fourth trip to Worlds?

A: I did everything to prepare. I made a plan of how I would be in the best shape and followed through. I was really in my best shape ever. Unfortunately it's one mistake and you're out but I am really proud that I did all I could. I can't do more than my best. I am also proud of the connection I felt with the audience. We are there to entertain and I feel like I did.

A: I haven't decided yet if I will do one more year. I said during this season that I would give my answer after Worlds and the answer is coming, but not yet I'm afraid. So plans and programs will have to wait.

Q: You are coached by your brother Kalle, who is a former competitive skater himself, in Copenhagen. What is being coached by your own brother like and do you always get along?

A: Sometimes it is hard because of course, we don't always get a long but who does? Fortunately, I have two coaches and Martin Johansson is a great compliment. We all really want this, so of course there is going to be arguments of what is the best. Our strength is that we can discuss everything and agree on the best course of action. Of course, my coaches have the final say but since I am now an adult, I can give my input and then its great to have my brother who knows me best and knows when to push and when to let go.

A: When I train really hard, I eat vegan. I also have had no serious injury since I was eighteen. I do a lot of public speaking about food and physical training for young skaters in Sweden and Denmark and share what I picked up during my long career. I also love visiting different countries and checking out new and exciting towns.

Q: If you could change anything about the way skating is judged, what would you change?

A: The components scores. Some skaters have great skating skills and some are better at interpretation so give them fair points. There should be more difference between the components for the same skater. Also, focus more on the artistry because we need the audience to make this sport big again so maybe include more components about the artistry so skaters go for more for entertaining and less focus on just making the jumps. We all know if you make the jumps you get components and then we get boring jumping robots.

A: Evan Lysacek. I would like to see how he prepared for his Olympic gold. I have heard he is really a perfectionist so it would be cool to see how he worked for it.

A: The great thing about this sport is the challenge. There is always something new to learn and work on. I love waking up on a Saturday (my day off) being so tired and sore and knowing I worked my ass off to get to where I want to go.

Was this your cup of tea? Well, don't just stand there! In order for this blog to reach a wider audience, I could sure use a little help. All you have to do is "LIKE" the blog's Facebook page at http://www.facebook.com/SkateGuard for instant access to all of the new blog articles, features and interviews as they are made available. I also share daily updates and headlines from the skating world, videos and much more that's not here on the blog, so if you love figure skating as much I do, it would really be rude not to get on that inside edge! You can also follow all of the fun along on Twitter at http://twitter.com/SkateGuardBlog. If you know someone who loves skating, tell them! It's all about getting a dialogue going on! Fabulous skating is too fabulous to keep secret. Am I right or am I right?
Posted by Skate Guard Blog at April 15, 2014
Email ThisBlogThis!Share to TwitterShare to FacebookShare to Pinterest
Newer Post Older Post Home
"As a rule an author has one or two popular ways of contrasting the past with the present. He can treat the past as lying in comparative doleful ignorance, or he can explain that the past was infinitely superior to the day we live in. Of course, either method is the popular journalism of the moment, and in reality there is no sharp contrast, but a gradual transition which leads the past into the present." - Joel B. Liberman, Skating Club Of New York