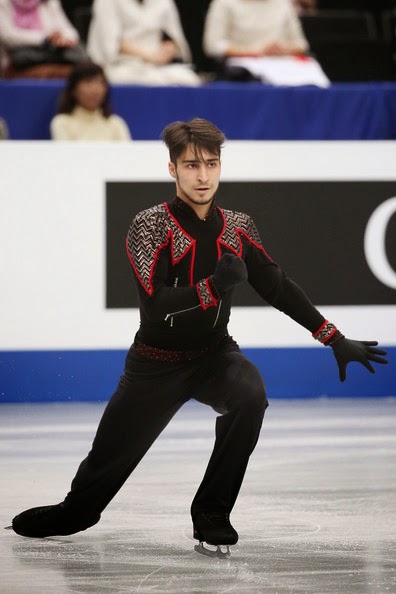 Competing for Russia for six years boded well for Ivan Righini, who wasn't Ivan Righini back then. Ivan Bariev won two Russian junior men's titles and placed as high as sixth on the senior level in Russia and seventh at the World Junior Championships in 2008 before deciding to represent Italy, the country of his mother's birth during the 2013/2014 season. Ivan adopted his mother's former surname Righini and found expeditious success representing his new home in winning the Italian Figure Skating Championships on his very first try. He also won the Bavarian Open international competition and incredibly placed thirteenth at his first senior World Figure Skating Championships this past season. A very strong technical skater, Righini's future in figure skating looks much brighter these days and I think he's certainly a skater whose name we'll be hearing a lot more from. He took the time to talk about his transition to competing for a new country, first World Championships, future in skating and much more in this interview I think you'll quite enjoy:

Q: You twice won the Russian junior title and won four medals on the Junior Grand Prix and competed internationally for Russia for some years before deciding to obtain a dual citizenship and represent Italy internationally (the country of your mother's birth). What brought on this decision and was it a difficult or an easy process?

A: It was pretty hard! For one moment, I wanted to stop skating but then I said to myself that it's kind of silly to stop after skating such a lot of years for nothing. The decision was made so unpredictably and now I'm happy to introduce Italy!

Q: You recently placed thirteenth at the 2014 World Championships in Saitama, Japan with some GREAT skating there. What are you most proud about your first trip to Worlds?

A: I'm so proud of myself that I could control my nerves in front of such a big crowd! For me, in the short program I was really shocked. I had never been to such a big competition so it was a big stress, but in the free I felt myself so comfortable. I did actually everything I could with one small mistake and skated easily. So I think debut was approved!

Q: Looking forward to next season and beyond, what are your goals in skating and how will you work in training to achieve them?

A: My goals for next season are to put the quad in both programs, to compete on a hard level and to be for sure in the first ten on the Worlds and first five in Europeans. I am soon starting already to make new programs.

A: Russian food? I think it's pelmeni and borscht. For Italian food, I prefer pasta and pizza and I love seafood! Q: What's the most difficult jump or jump combination you've ever landed?

A: The most difficult jump I tried was (a long time ago) the quad loop and hardest combination was triple axel/triple toe/double loop.


Q: If you could change anything about the way skating is judged, what would you change?

A: I actually like how everything is now. Maybe the points were so high in last time.

A: I already met my idols, Alexei Yagudin and Stephane Lambiel. I would like to meet Philippe Candeloro one time because I love the way he skated.

A: Alexei Yagudin has always been my idol. Stephane Lambiel's skating is just phenomenal and Patrick Chan has great skating.

Q: Describe your perfect day away from the rink - where would you go and what would you do?

A: My day would start by not waking up too early, having a great breakfast, then a walk in the center of Moscow to meet my friends and talk with them and then go back home, buy some food and watch movies.

A: I love figure skating! I love the crowd and feel how they cheer for me. I love to show myself!

Was this interview with Ivan your cup of tea? Well, don't just stand there! In order for this blog to reach a wider audience, I could sure use a little help. All you have to do is "LIKE" the blog's Facebook page at http://www.facebook.com/SkateGuard for instant access to all of the new blog articles, features and interviews as they are made available. I also share daily updates and headlines from the skating world, videos and much more that's not here on the blog, so if you love figure skating as much I do, it would really be rude not to get on that inside edge! You can also follow all of the fun along on Twitter at http://twitter.com/SkateGuardBlog. If you know someone who loves skating, tell them! It's all about getting a dialogue going on! Fabulous skating is too fabulous to keep secret. Am I right or am I right?
Posted by Skate Guard Blog at May 18, 2014
Email ThisBlogThis!Share to TwitterShare to FacebookShare to Pinterest
Newer Post Older Post Home
"As a rule an author has one or two popular ways of contrasting the past with the present. He can treat the past as lying in comparative doleful ignorance, or he can explain that the past was infinitely superior to the day we live in. Of course, either method is the popular journalism of the moment, and in reality there is no sharp contrast, but a gradual transition which leads the past into the present." - Joel B. Liberman, Skating Club Of New York