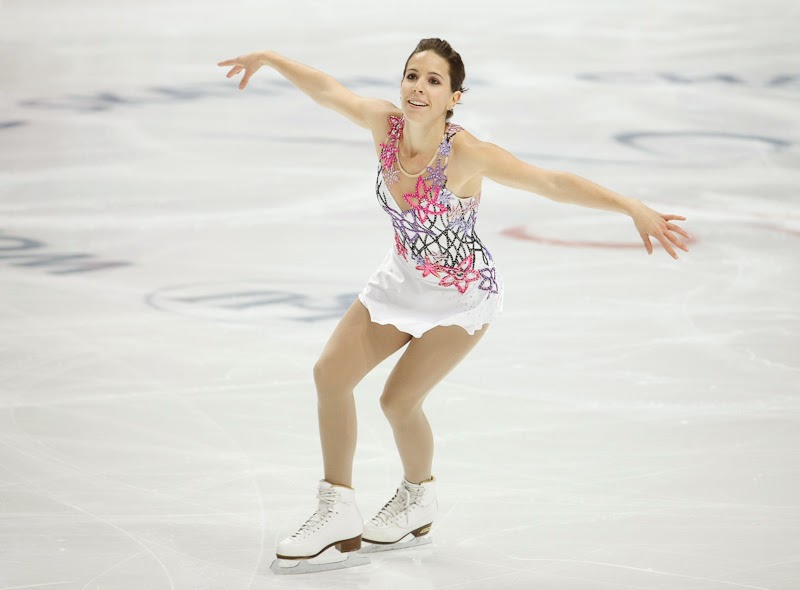 Fresh off the 2014 South African Figure Skating Championships in May, South Africa's Lejeanne Marais has represented her country internationally since 2004 and has done so while not only putting countless hours on the ice training hard at the ice but also studying architecture at Tshwane University Of Technology in Pretoria, South Africa. Both have paid off in dividends. In addition to recently winning her sixth national title, Marais has also started working at an architecture firm. She took the time to talk to me about her competitive skating career, love affair with architecture, her favourite skaters and much more in this fantastic interview:

Q: You've won the South African national title five times and represented your country at four World Championships, seven Four Continents Championships and international competitions from Germany to Turkey to Mexico and everywhere in between. What are your proudest or most special moments from your competitive skating career?

A: There are three competitions that really stand out: the Youth Olympic Festival in Sydney. Australia, the Winter Universiade in Erzurum, Turkey (the opening and closing ceremonies where held in a huge stadium packed full of supporters and the atmosphere was electric, as well as staying in a 'student Olympic Village' amongst athletes from different winter sport disciplines) and the 2012 World Championships in Nice, France where I qualified through the preliminary round was also a highlight in my career.

A: My Mom and I have an amazing relationship. She is my best friend, mom and coach and somehow it manages to work perfectly. We do have our disagreements on the ice, especially when I was younger, but we make a point not to take anything from the ice rink back home.

Q: You studied architecture at the Tshwane University of Technology in Pretoria, South Africa. What draws you to architecture and what do you consider the three most stunning or fascinating pieces of architecture that have ever existed?

A: I have grown up taking an interest in architecture. My Dad is an architect and has always made me notice and appreciate my surroundings. I have been especially fortunate to travel all over the world and see in real life what many other people would only be able to see on the internet. I was fortunate to visit The Walt Disney Theatre by Frank Gehry when I was at the World Championships in L.A. I went to the Sydney Opera House by Jorn Utzon when I was on the trip to the Youth Olympics and then the multiple buildings in Dubai such as the Burj Al Arib which I had seen when we flew through Dubai enroute to a competition. There have also been many other amazing cathedrals and of course the architecture in Europe is something to admire.


Q:  From 2010-2013, you decided to keep the same free skate for three seasons. What did you love about "The Holiday" program that made you decide to keep the program and allow it to continue to develop?

A: I absolutely love the music. It allowed me to go into my own world and to just enjoy what I was doing instead of worrying about what step or element came next. I was also very fortunate to work with Shanette Folle in 2012 and she choreographed a new short program to new music and then choreographed a new free program to my existing music.

Q: What are your goals and plans for the 2014/2015 season and beyond when it comes to competitive skating? Have you given thought to or started working on new programs?

A: I am very excited to see what this season brings in terms of vocal music but I have not yet given much thought to new programs as I have been so busy with the South African National Championships. This has been a very long season and unfortunately a very difficult one as I have been battling with an injury. I have the start of a fracture in my lower spine - an Odema bone - and it has been giving me pain since August of 2013. At the moment, I am managing it as best as I can but I cannot afford to take six months off of training as I have been advised by my specialist. I plan to take a couple weeks break now after Nationals to allow it to start recovering.

Q: What can you tell us about how skating has progressed in your country?

A: Skating in South Africa is progressing in leaps and bounds. We are getting a lot more international interest and a lot of the up and coming skaters are looking very promising. We are still in a constant battle with the ice rinks in South Africa to get the figure skaters more training time but we are slowly making progress. Unfortunately all the ice rinks are public rinks and from 8 AM to 5 PM they are off limits to figure skaters so we need to train before the public comes from 5 AM to 8 AM and then some evenings from 5 PM to 7 PM if the hockey players haven't booked the ice.

Q: What is the most challenging part of competing and the most rewarding?

A: The most challenging part is that you only get one chance - four minutes - to prove yourself and to represent all the hours and hours of training. The most rewarding is when you skate a clean program and the absolute enjoyment of it all. There is no better feeling than standing on the ice in your end position and knowing you did it brilliantly.

A: Carolina Kostner is one! I have been very fortunate to get to know her and not only is she an amazing skater but also such a great person. Also, Gracie Gold for her precise and beautiful jumps and Alena Leonova for the way she pours all of her being into every move she performs on the ice.

A: I am getting married in April 2015 to a triathlete and South African half Iron Man competitor, Bryce Hennessy. We are both obsessed with sport so we get along very well!

Q: Life is full of 'love/hate relationships'. What do you love the most about figure skating and what
do you like the least?

A: I love the challenge of figure skating. It is so technical and requires so much attention to detail. I love trying new things and I love the way landing a triple feels. What I don't like about figure skating is that everyday is never the same, sometimes an element is so easy it requires such little thought and the next day it a struggle to do the same thing. It is like the famous speech 'Inch By Inch' from the movie Any Given Sunday. Life is all about inches and you need to fight for those tiny inches in order to succeed because in the end of the day it is that one inch that sets you apart from the other person who let that inch slip away.

In order for this blog to reach a wider audience, I could sure use a little help. All you have to do is "LIKE" the blog's Facebook page at http://www.facebook.com/SkateGuard for instant access to all of the new blog articles, features and interviews as they are made available. I also share daily updates and headlines from the skating world, videos and much more that's not here on the blog, so if you love figure skating as much I do, it would really be rude not to get on that inside edge! You can also follow all of the fun along on Twitter at http://twitter.com/SkateGuardBlog. If you know someone who loves skating, tell them! It's all about getting a dialogue going on! Fabulous skating is too fabulous to keep secret. Am I right or am I right?
Posted by Skate Guard Blog at June 16, 2014
Email ThisBlogThis!Share to TwitterShare to FacebookShare to Pinterest
Newer Post Older Post Home