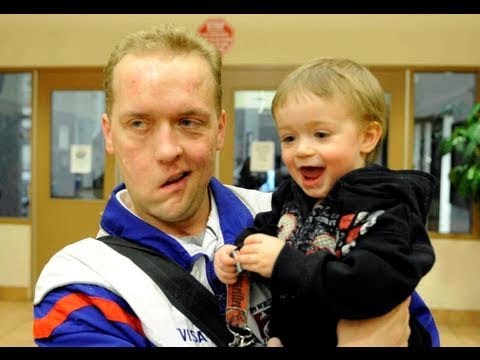 Paul Binnebose's story is quite simply put one of the most inspiring stories I've ever heard in the world of figure skating. Just at the peak of his career, the World Junior and U.S. Medallist seemed poised to make a move in the U.S. pairs skating ranks just when the unthinkable happened - a horrific practice accident that saw Paul seriously injure himself to the point that he had to have emergency brain surgery and be put in an induced coma. His heart stopped twice. Although he still now suffers facial paralysis and other effects of his accident, incredibly Paul returned to the ice and the skating world. He is now a proud father of two and popular coach in the Denver, Colorado area who has a new outlook on life and an admirable perspective on the challenges life has given him. It was an absolute privilege to speak to Paul about his competitive career, the accident that changed everything, the current judging system, fatherhood and much more in this interview you're going to want to stop everything and read:

A: I have a long winded response for you, get ready here it comes! My competitive career began long before Jacki. When I was twelve, I was working on a triple toe. When I took off and pulled in the blade on my left foot went through my right boot and my feet were stuck together, when I hit the ice my legs got stuck in the ice. I broke my leg in early June 1990. I was in a cast from June to the very start of September. I got out of my cast and got straight to work. By April, I won the Juvenile/Intermediate Nationals in intermediate boys figures. It was only the second time that competition was held. The next year I started skating pairs with a young lady named Nicole Bateson-Rock. We started working very hard and I was competing in singles as well. When the season was over, Nicole and I had won the triple crown (Regionals, Sectionals and Nationals) and I won a bronze medal in novice men's figures. Because of traveling logistics, Nicole and I didn't have a second season. I went on a partner search and started skating with a girl named Sara Ward. She had no pair tests so we had a lot of ground to cover to say the least. We worked as hard as we could, but after the last test session of the summer we didn't pass our junior pair test. That meant I needed to go back to the same event I had just won and Sara and I both knew what was expected of us for the year. At the close of the season, Sara and I had done exactly what Nicole and I had done the year before. That was the first time that a skater won Nationals back to back years with different partners. Sara and I stayed together and knew we had a leap to make so we could make a splash in juniors. That season had the improvement we were looking for, we went to Germany and skated in Blue Swords and finished sixth. We also were named on the U.S. Figure Skating World Junior team where we placed ninth. We finished out the year earning a bronze medal at the 1994 US Championships. Even though that year was full of success and improvement, I did not believe that Sara had the potential for more difficult jumps. So, against the advice of my coaches I never went back to Delaware from Nationals. I drove to L.A. and found a new partner. That is when I began skating with Jacki Davison. We spent our first year training out on the west coast. By the time Nationals came around, the disrespect that I had shown to my former coach was paid back in spades. Jacki and I were ninth in the event I had just won bronze in the year before. So with my tail between my legs I went back to Delaware and took Jacki with me. After that season, my coach felt that Jacki didn't have the body style that was needed to succeed and I switched to a girl named Tristan Vega. We trained that summer and fall, but injury kept us from competing at 1997 Nationals. After the season, a girl that I had competed against in years prior became available. In the spring of 1998, I started skating with Laura Handy and during our time together we won International medals, a World Junior medal, and we were characters in the fall heard around the world. The truth is, I have only fallen on one lift. It was a big one, but it wasn't a habit of mine. The proudest moment of my career came more than ten years after it was over. When I admitted to myself that everything that was given to me was a gift from God, and NOT because I had done a thing.

Q: The accident saw you have emergency brain surgery, be put in an induced coma and your heart stop twice. I can't even begin to imagine that. How do you put it all in perspective? What did you take from it all spiritually and personally?

A: The accident was a coming of age for my soul. It was a tragic, upsetting, faith testing event for everyone that was close to me. I count it as a blessing that God did not have me go through any of that. I do not even remember skating the day of the accident. I went to bed on September 28th and had some amazing experiences about God and life, then I woke up and found out what had happened. Even though I had questions about what had happened, I was answering questions about what is going to happen. No one can be where I have been and not be sold out to Jesus Christ.

Q: Returning to the ice after the accident... was there a fear there?

A: I never had any fear about going back to the ice. I have been a skater longer than I can remember. I was thrilled to go home.

Q: You're now coaching and living in Denver, Colorado. What is the most rewarding part of coaching?

A: Anytime I get to see a skater "get it", and I know that I helped make that connection it's amazing. Helping somebody become successful makes me feel success when I see them make it. If only we could get the whole world to seek that kind of satisfaction.


Q: Through coaching, you not only met your wife but the mother of your children. How did the two of you connect?

A: Lisa and I trained together in Delaware. She is an amazing woman and she loves BOTH of our sons with no equal. Ethan is four and Eli is two.

Q: Figure skating has changed so much since you competed, with the 'new' judging system, anonymous judging and so many rule changes along the way. What do you think of it all? Do you think the sport is in good or bad shape?

A: I love skating, but I do not subscribe to any group. Skating has only changed the judging system so they could confuse the people involved. In my opinion, this new judging system is just as corrupt as the old one. We just haven't broken the code..... Yet.

A: Most people don't know I'm divorced. You never saw that coming did you?

Q: What advice would you give someone fighting back from something like you have had to in life?

A: As far as people that have trials to overcome... never quit. Doctors told my family that IF I came out of my coma, I would be in a hospital for the rest of my life because of the oxygen deprivation the two times I was dead. Humans are NOT in control. I try to stay away from religious dogma; that scares people away. What I can tell you is that if you breakdown the word universe into its latin parts 'uni' is one, and 'verse' is spoken sentence. So with one spoken sentence God created everything. Also, for every person that is here saying "I can't believe they're gone", there are more than twice as many saying "Here they come". Ryan, thank you.

Did you love this interview with Paul as much I did? Well, don't just stand there! In order for this blog to reach a wider audience, I could sure use a little help. All you have to do is "LIKE" the blog's Facebook page at http://www.facebook.com/SkateGuard for instant access to all of the new blog articles, features and interviews as they are made available. I also share daily updates and headlines from the skating world, videos and much more that's not here on the blog, so if you love figure skating as much I do, it would really be rude not to get on that inside edge! You can also follow all of the fun along on Twitter at http://twitter.com/SkateGuardBlog. If you know someone who loves skating, tell them! It's all about getting a dialogue going on! Fabulous skating is too fabulous to keep secret. Am I right or am I right?
Posted by Skate Guard Blog at June 10, 2014
Email ThisBlogThis!Share to TwitterShare to FacebookShare to Pinterest
Newer Post Older Post Home