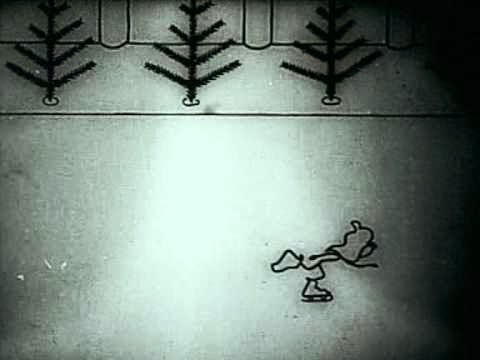 In these days of 3D, HD, DVD, AC, DC and all of that technological mumbo jumbo, it's really hard to imagine that a crudely animated 1927 film about an ice skating stick figure would have ever been a smash hit. Well, it was. Juri Scheljabuschski's "Katok" ("Ice Rink") was a classic example of early Soviet animated films and one of - if not the earliest - animated film pieces storied around ice skating.

The protagonist of Scheljabuschski's popular film was a small stick figure with only a line for a body, arms, boots and a winter hat. The plot of "Katok" follows this little skating ice figure as he spies on a stick-figure woman skating with as much grace as a stick-figure can have with a Rubenesque NEPman who (having already paid for his ticket to skate) felt he had 'first dibs' on the female stick-figure gracefully performing on the ice. Without enough money to pay his admission to the skating session, the stick-figure 'hero' tries to enter the rink and is stopped by both a portly guard. The stick-figure hero does find a way past the forces preventing him from skating that day with the help of a big, strong man (who doesn't love one of those?), creates a single skate for himself and provides a bit of slapstick when he enters the ice rink and the 'public eye' on his one skate and inadvertently wins a skating race.


Scheljabuschski's "Katok" (also sometimes translated) as "On The Skating Rink" has all of the characteristics of Berlinale Soviet animated films of the era. It shows the natural oppression of the capitalist system, the comedy of the dominating class' extravagance and the success of the underdog or trickster. The success of 'the trickster' was a central theme in animated Russian film after film during that era. Emelya, Ivan Durak, Karlsson and Shapokliak are all examples of animated tricksters that found success in Russian animated films of the era.

Following the success of "Katok", Juri Scheljabuschski went on to find success in other film projects including the 1930 Soviet film "The New Life (Drugaja schisn)" about how a gold boom provided an era of luxury for the people of Azerbaijan. Although many of his other works had a more serious tone, his lighthearted "Katok" remains an old favourite and it no doubt drummed up interest in ice skating amongst the Soviet people in between World War I and II. The Soviet Championships in figure skating had only been held beginning in 1920, and during that period, skaters like pairs team Maria Laskevich and Igor Vonzblein, Yuriy Zel'dovich, Ivan Bogoyavlenski and Tatiana Tolmacheva (Granatkina) would hold court in skating circles.

It wouldn't be until 1964 when Ludmila and Oleg Protopopov won their first of two consecutive Olympic gold medals in pairs skating that the Soviet/Russian stronghold in figure skating would begin... and you have to wonder if "Katok" inspired some of the skaters before them to sneak into an ice rink and pave the way.

Skate Guard is a blog dedicated to preserving the rich, colourful and fascinating history of figure skating and archives hundreds of compelling features and interviews in a searchable format for readers worldwide. Though there never has been nor will there be a charge for access to these resources, you taking the time to 'like' on the blog's Facebook page at http://www.facebook.com/SkateGuard would be so very much appreciated. Already 'liking'? Consider sharing this feature for others via social media. It would make all the difference in the blog reaching a wider audience. Have a question or comment regarding anything you have read here or have a suggestion for a topic related to figure skating history you would like to see covered? I'd love to hear from you! Learn the many ways you can reach out at http://skateguard1.blogspot.ca/p/contact.html.
Posted by Skate Guard Blog at June 04, 2014
Email ThisBlogThis!Share to TwitterShare to FacebookShare to Pinterest
Newer Post Older Post Home