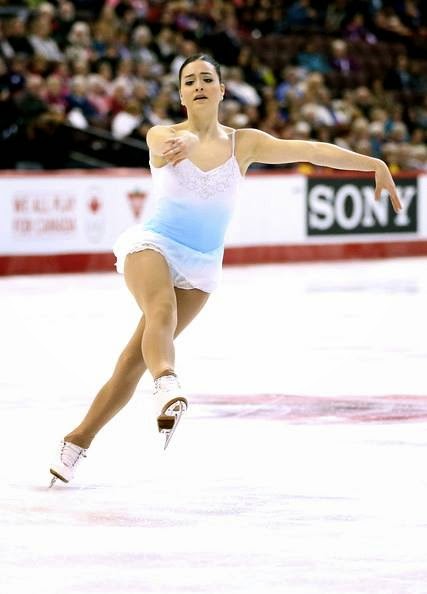 Alexandra Najarro's skating career to date has been a lesson in dedication. Rising through and finding great success in the novice and junior ranks, Alexandra has spent the last four years competing on the senior level in Canada and twice in that period has finished in the top five at Nationals. She's represented Canada internationally on the Junior Grand Prix circuit, at Junior Worlds and the Four Continents Championships as well in 2012. Alexandra, who is certainly a very fluid and artistic skater as evidenced through her work with choreographer Shae-Lynn Bourne, is a student of two time Canadian Champion and Skate Canada Champion Tracey Wainman. She took the time to speak with me about her accomplishments to date, working with Tracey Wainman, goals going forward in skating and much more in this wonderful Canada Month Skate Guard interview:

Q: After winning the Canadian novice title in 2008, you've had a steady rise of success over the years, three times finishing in the top six at Nationals (including this year as well). You have also represented Canada internationally on the Junior Grand Prix circuit, the World Junior Championships and the Four Continents Championships as well. What are your proudest moments or most special memories from competition so far?

A: Well, I would definitely say that my most special moment was at the 2011 Nationals where I finished fourth and made it on the national team for the first time. In the competitions leading towards those Nationals, I was really struggling with my short programs. It was some sort of a mental block I had to overcome since in training, they were done clean almost everyday. I was at a point where I didn't know if I could compete well again. I started doubting myself. So, to finally reach that potential and skate clean at a senior National Championship was very emotional for me, and truly a special moment.


Q: You're coached by two time Canadian Champion Tracey Wainman in Richmond Hill, Ontario. What makes Tracey a great coach and the best coach for you?

A: There's a lot of aspects that make Tracey a great coach. She has the ability to put you in the right mindset for training. She knows what to say in any situation. She's able to push you hard, but knows when it's time to pull back a bit. She's an excellent trainer. She's the best coach for me because I respond to her training habits and we see eye to eye on many things. I want to be trained properly and she knows exactly how to do it.

Q: What are your main goals for the 2014/2015 season and what can you share about the programs you will be skating?


A: My main goals for this season are improving my jump arsenal in programs, to improve consistency of jumps, getting a senior international and placing in the top three at Nationals. As for programs, I will be keeping both programs from last year since I barely got to truly perform and compete with them. My short program is a tango with a twist. It starts off as a traditional quick tango but later changes into a more modern beat. As for my long program, it is the music from the motion picture "Sabrina". This program is soft and very emotional. I am fully embodying the character from the movie. Every part of the solo follows a story line and the transformations of the character.

Q: You speak four languages (English, French, Polish and Spanish) which I think is just incredible. I do well to speak one most days. Your parents mother tongues being Spanish and Polish, have you ever had chance to visit Poland or Spain and what are the most interesting aspects of both culture's traditions?

A: I have not yet had the pleasure to visit Poland, but I would really love to one day. My dad is actually from Nicaragua. As a family, we went there years ago to visit family and for a nice vacation. It was a great trip but I would also love to visit Spain one day as well, preferably Barcelona.

A: My three most favourite skaters of all time are Sasha Cohen, Yuna Kim and Daisuke Takahashi. All three of these skaters always have the ability to make an impact on you with their skating. Sasha was basically a beautiful ballerina that could skate. Her facial expressions and emotions in her programs were so captivating and she truly was one of the best performers. Yuna as well. She always skates really beautifully and I was a fan ever since I first watched her. On top of that, she has amazing jumps with great flow. I also just admire her as a person. I admire her strength and her mental toughness. I wasn't too much of a fan of Daisuke's at the beginning but his 2012 long program absolutely captivated me. I was instantly a fan from that point on. He also has that ability to move you emotionally and captivate you with his performances. He is truly an artist on the ice.

A: One thing people don't know about me is that after skating, I would love to pursue an acting career. It's the other thing that I love doing or would love to do.

A: For me, the thing I love most about figure skating is the fact that it combines both beauty and strength. The jumps are so exciting to do and to watch. At the same time, I love the performing aspect of skating as well. As a skater, you get tell a story on the ice, to captivate the audience even more. It's just so versatile, and when all the pieces combine it's just so magical to watch.

Skate Guard is a blog dedicated to preserving the rich, colourful and fascinating history of figure skating. Over ten years, the blog has featured over a thousand free articles covering all aspects of the sport's history, as well as four compelling in-depth features. To read the latest articles, follow the blog on Facebook, Twitter, Pinterest and YouTube. If you enjoy Skate Guard, please show your support for this archive by ordering a copy of figure skating reference books "The Almanac of Canadian Figure Skating", "Technical Merit: A History of Figure Skating Jumps" and "A Bibliography of Figure Skating": https://skateguard1.blogspot.com/p/buy-book.html.
Posted by Skate Guard Blog at July 11, 2014
Email ThisBlogThis!Share to TwitterShare to FacebookShare to Pinterest
Newer Post Older Post Home