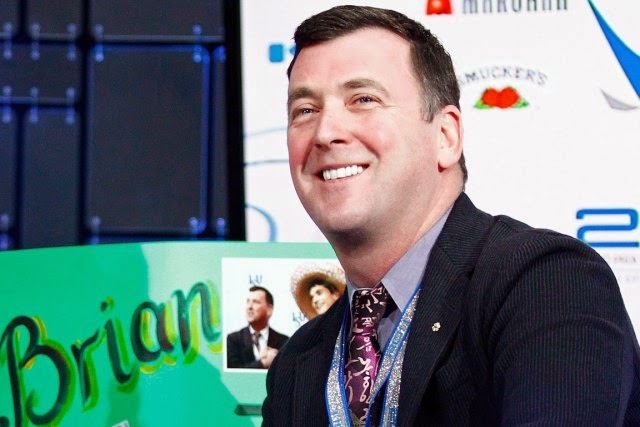 You've all heard the old opera colloquialism "it ain't over till the fat lady sings". Well, the way I see it is this... if you're going to have a Canada Month on your blog, it ain't over till you interview Brian Orser. That's just how it works. How do you even introduce Brian Orser? He's one of several wonderful skaters like Liz Manley, Robin Cousins, Toller Cranston and Anita Hartshorn and Frank Sweiding who inspired me to start skating myself. He's won the Canadian novice title, Canadian junior title and the Canadian senior title (the latter EIGHT CONSECUTIVE TIMES). He's won Skate Canada International three times in addition to two Olympic silver medals and the 1987 World title. He followed that up with one of the most successful and enduring professional careers going, competing professionally and touring with Stars On Ice for almost twenty years. After taking a step away from performing in 2007, he turned to the coaching world. He's coached two Olympic gold medallists (Yuna Kim and Yuzuru Hanyu), as well as Javier Fernández, Christina Gao, Adam Rippon, Eric Radford, Elene Gedevanishvili, Fedor Andreev and many, many others. Most recently, he's come out with Peak Performance Skating, his own iPhone skating app! If there's something this man can't do, I can't think of it. To top it all off, he's just a delightful person! Before we get to the interview, I've got to tell you my Brian Orser story if you haven't heard it yet. In 2007, Canadian Nationals were here in Halifax and there was some GREAT skating that year. In between the pairs and men's free skates I think, my friend Jason and I were walking along the top of the rink and I saw Brian standing there standing talking to someone and me (forever the extrovert) just barged over to introduce myself. I wasn't letting that one go. He couldn't have been any nicer about the whole thing and I totally got him to autograph my ticket. I'm sorry! You don't get to meet your idols every day. That's what I thought at least until I started blogging... At any rate, Brian and I connected when he was in Japan putting together a show for Yuzuru Hanyu with Jeffrey Buttle and I can't thank him enough for taking the time to do this interview. I think you'll love it!:

Q: Two Olympic silver medals, the world title in 1987, three Skate Canada titles, eight consecutive Canadian titles, nearly twenty years with Stars On Ice and one of the most impressive professional careers in the business. What do you look back on as the most special or defining moments in your career when you reflect on it all today?

A: Moments! There are so many moments to reflect on... when I won my first senior Canadian title in 1981 in Halifax was a turning point and launched me on to the world scene. It was then I realized I had a shot at the World and Olympic podiums. Junior Nationals in 1979 is another big moment, landing my first triple axel. Both Olympic experiences stand out as well. I felt totally in charge and prepared and skating with the Olympic logo on the ice was so empowering. Making the "Carmen On Ice" movie with Katarina Witt was such a great experience. It was my first real chance at acting and movie making. All three CBC variety specials: "Skating Free", "Night Moves" and " Blame it On The Blues". Winning my first ever trophy in Sarnia, Ontario... I believe it was the Men Under 13 category... and winning the World title in 1987 in Cincinnati.

Q: You really revolutionized the technical side of skating by being the first skater to perform a triple axel at the Olympics and the first to include two triple axels in a program. Looking at the IJS judging system we have today as opposed to the 6.0 system when you were competing, do you think technical innovation is being rewarded enough and what aspects do you feel need to be improved about the way skating is being judged today?

A: We (as coaches) have to embrace the system we have at the moment. My job as a coach is to be sure my athletes have all the tools to tackle any system. I actually like this system as it rewards a "well rounded" skater. I was trained as a well rounded skater and when I competed, it seemed the jumps were "king" of choreography. Spins were secondary along with quality of edges, turns and transitions. The big improvement I feel that is needed is in the transparency in judging. I realize the idea is to "protect" the judges so they can do what they feel without any external pressure, however, I think it has backfired.

Q: Brian Boitano, Katarina Witt, Gordeeva and Grinkov and Torvill and Dean (among others) all reinstated in time for the 1994 Winter Olympics in Lillehammer. Was reinstating in 1994 something you considered?

A: (laughing) I think I entertained the idea for about thirty seconds! It was very brave for these "greats" to come back, but for me I wanted to continue on the direction and path I was already on.

Q: "The Story Of My Life" is stands out as not only one of your signature pieces but one of the most moving skating programs out there period. What did this music and program mean to you and what did you love most about skating to it for so many years?

A: "The Story Of My Life" was a piece of music that my mother found and loved. She (like me) was a huge Neil Diamond fan. It seemed fitting to skate to this after the Calgary Games and for the 1988 season, as it was my last amateur run. Following my mother's death in 1996, I brought it back as a tribute to her and also to help me through the pain I was feeling. Skating was my way of feeling and expressing. I had the song, my friends and the audience every night.

Q: Would you ever get back into touring or performing regularly again?

A: (laughing) No! Been there, done that and got many t-shirts!

Q: Maybe I'll just try asking you that again in a bit and see if you change your mind. You've recently launched your own skating app called Peak Performance Skating. How did the idea for an app come together in your mind and what does the app offer that is missing in the training regimes of so many skaters?

A: The idea of Peak Performance Skating really came by chance as I met Asad Mecci in my condo building. He is the consulting hypnotist whose voice is on our app. He was discussing the success of the work he had done with tennis players and asked about working on an app for figure skaters. I jumped at the opportunity to develop something for my skaters and eventually have it available for all skaters at all levels. This is the type of training I did as an athlete... not so much with a recorded session but a live exercise we went through at competitions for realization and visualization. Fast forward to today and the tool is now with you when YOU need it at any time or place. You just simply turn on your phone or tablet. It's something that can help any skater, especially before they compete.

Q: You've coached or currently coach a who's who of figure skating today - Olympic Gold Medallists Yuzuru Hanyu and Yuna Kim, Olympic Silver Medallist Eric Radford, two time European Champion Javier Fernández, Adam Rippon, Christina Gao and so many others. For you, was the transition to coaching from performing a natural one and what would you say is your 'secret' as a coach?

A: I think the transition for me to coaching and teaching was a smooth one, but quite abrupt. The offer for me to direct the skating section at the Cricket Club was sudden and unexpected. I would only tackle the responsibility if Tracy Wilson would do it with me. She said yes and the rest is history. My first student was a fifteen year old junior skater from Korea. Her name was Yuna Kim. Of course she was talented, but unfortunately she lacked passion and joy for skating. I feel my best tools are my experiences from competing at a very high level... my physical readiness and mostly my mental readiness. This is where Peak Performance comes in for my athletes to use as a tool. It allows them to visualize themselves in their own thoughts and pictures for their potential and level of skating. This was an exercise that I did regularly as an athlete. I think my "secret" is a variety of things: mental readiness, preparation, communication, team work, motivation, and most of all, I believe in them. I know they will reach their full potential.

A: As someone who has been in the media from a young age, I don't think there is any thing that people don't know.

Q: If you could give one piece of advice to every skater in the world, what would it be?

A: The only advice is that athletes should feel free to express themselves. Love skating for the beauty it is. Take the time to simplify it.

Skate Guard is a blog dedicated to preserving the rich, colourful and fascinating history of figure skating. Over ten years, the blog has featured over a thousand free articles covering all aspects of the sport's history, as well as four compelling in-depth features. To read the latest articles, follow the blog on Facebook, Twitter, Pinterest and YouTube. If you enjoy Skate Guard, please show your support for this archive by ordering a copy of the figure skating reference books "The Almanac of Canadian Figure Skating", "Technical Merit: A History of Figure Skating Jumps" and "A Bibliography of Figure Skating": https://skateguard1.blogspot.com/p/buy-book.html.
Posted by Skate Guard Blog at July 29, 2014
Email ThisBlogThis!Share to TwitterShare to FacebookShare to Pinterest
Newer Post Older Post Home 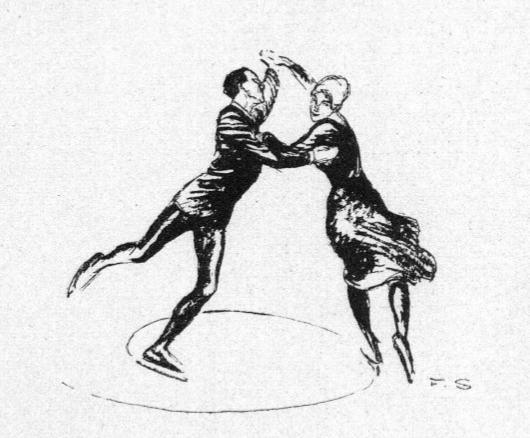