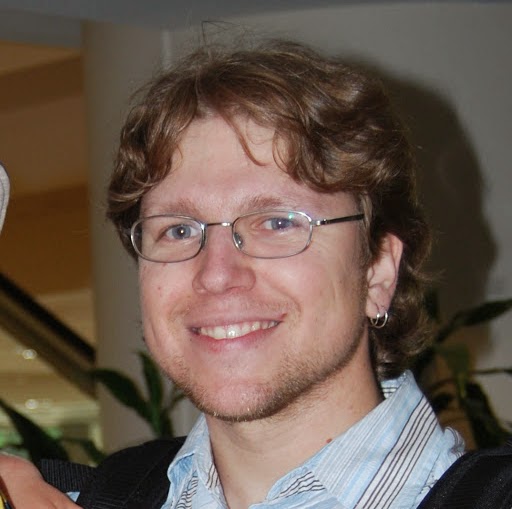 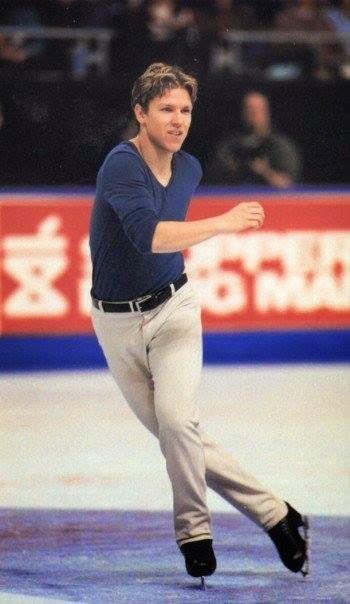 I have to say... I was a big fan of Jayson Dénommée's skating when he was competing but I am an even bigger fan now after having chance to interview him for Canada Month here on the blog! For those of you who may not be super familiar with Jayson's career, I'll give you the run down. He represented Canada from 1996 to 2003 on the senior level internationally, competing on the Grand Prix circuit and Four Continents Championships and winning medals at both the Ondrej Nepela Memorial and Nebelhorn Trophy. In 2001, he won the silver medal at the Canadian Figure Skating Championships right behind Emanuel Sandhu. Always a showman on the ice, he was always one of those skaters you couldn't help but root for when you watched him skate. Now removed from the skating world and actually doing the same thing I'm doing - blogging - Jayson was kind enough to take the time to talk about his competitive career, the 6.0 versus the IJS judging system and even offer some great advice to skaters competing today. I think you're really going to like this one. I did!:

Q: Your career included some wonderful accomplishments - the silver medal at the 2001 Canadian Nationals (where you beat some pretty incredible skaters - Jeffrey Buttle, Ben Ferreira, Ravi Walia, Fedor Andreev and Jeff Langdon among them), medals at both the Nebelhorn Trophy and the Ondrej Nepela Memorial, Grand Prix assignments around the world, two trips to Four Continents. Reflecting now, what are your proudest moments and most special memories? 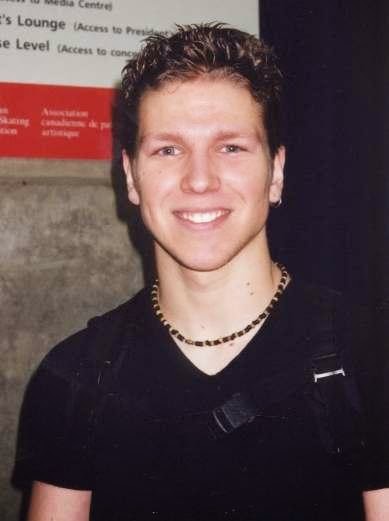 A: This is going to sound strange but it's not while I was a senior competitor that I felt the proudest. It was at the 1995 Quebec Provincials when I was still in the junior category. I had moved to Montreal the year before and it had been a difficult year for me adjusting. I stepped on the ice for my free program and I landed my triple axel for the first time in competition. When I finished my program, everyone in the arena was on their feet and I had my first standing ovation. This is the first time I felt validated has an athlete. Any medal is always a good feeling but it's moments like that that define you.

Q: After winning the silver medal in 2001, the following three seasons didn't have the same kind of results. In all fairness though, you were competing against some pretty incredible skaters in 'your era', Elvis Stojko, Jeffrey Buttle, Emanuel Sandhu among them. When and why did you reach the decision not to continue through to 2006?

A: Well, I actually tried. I changed coaches in 2003 because of a disagreement with my previous coach and I started to train really hard. I was on top of my game physically but I pushed the limit a little too hard just before the 2004 National Championships. I ripped a ligament in my right groin. I went to Nationals injured for the first time in my life at twenty six years old and I must admit I didn't prepare myself mentally as well as I did physically. I was doing double clean programs every day at the rink just before leaving and when I stepped on the ice in Edmonton, I felt old for the first time in my life. After that, I went back home to rest, thinking I would prepare for the following next two seasons leading up to the Olympics. I got married that summer and after that, my injury wasn't getting any better. The weight of training every day for twenty years had taken its toll on me.

Q: You were always known really as a showman out there and a crowd favourite. I remember programs like your "Pick Up The Pieces" short program that really just had the audience in the palm of your hand. Were you always an outgoing person or is that something that came with time on the ice?

A: I have always been comfortable on the ice because I knew I was playing a part and it has always come naturally to me. I always loved that aspect of figure skating. But that being said, it was only in my early twenties that I managed to express myself verbally. I was a very shy and individual teenager and by being at the rink during most of my spare time, I didn't spend much time with friends or people not directly involved with my skating.


Q: You were one of many skaters personally quite affected by the judging system change, growing up with the 6.0 system and rounding out your career with the 'new' IJS/Code Of Points system. How hard was that transition for you and your coaches at the time and what do you think about how the system has developed since then?

A: I honestly didn't really give it a chance because I fundamentally didn't believe the previous system was all that bad. This is my own opinion but I always felt the problem could have been fixed by just paying the judges. It would be easier to prevent alliances if you could penalize a judge for not being objective or impartial. To me, the new system looked promising at first because of its intention and by its nature. I don't wan't to sound like this is a rant because I know I would never measure up to any of the top skaters in the new system. I never had the quality of skating skills they have nowadays but I feel that most of the skating is becoming generic these days. Don't get me wrong. I admire Patrick Chan because he is an amazing skater and even a greater champion off the ice but everybody is a copy of him on the ice now. My favourite skater at the Olympics was Jason Brown this year. Not the best technician... but what an entertainer that kid is! Again, I grew up watching Scott Hamilton, Kurt Browning, Robin Cousins and Brian Orser so I have to be nostalgic for skaters with a lot of personality and that's what I miss the most from skating right now.

Q: These days you are married, based in Varennes, Quebec and work in video editing and online blogging as well with a site called Geek Ou Nerd! What do you enjoy most about your work and what advice would you offer someone like me who's trying to make a mark with blogging about figure skating?

A: Even though I was an athlete for twenty years of my life, I've always been a nerd and I fully assume it. It took me a long time to find out who I was after my skating career was over. Skating was a big part of my life and filling the void it left wasn't an easy thing. For me, it was editing videos and writing about geeky things. If I have one piece of advice to give to anyone is that life is too short to hesitate on doing the things that move you or drive you. Set yourself goals but don't put too much emphasis on achieving them. The journey is quite spectacular. Take my word for it. I did not get an Olympic medal but I had an amazing career. 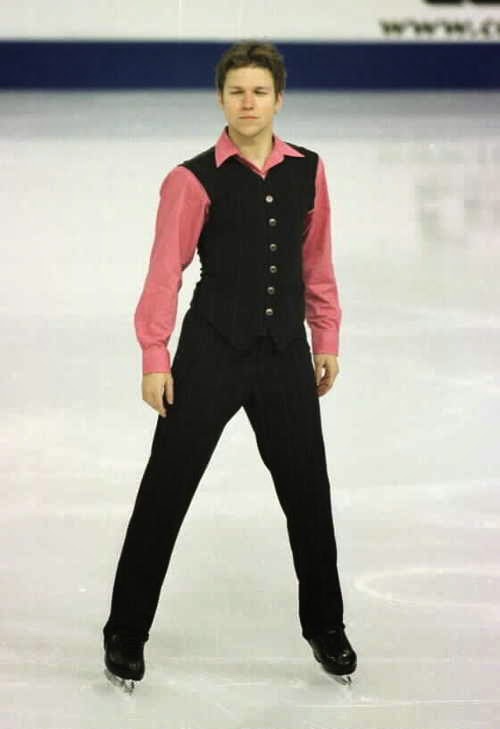 Q: Wonderful advice definitely. I couldn't agree with you more. I'm also curious as to when the last time you were on the ice was and if coaching or performing professionally is something you would ever give consideration to at this point in your life?

A: Sadly, It was almost a year ago that I last taught skating. I really miss it but it's getting harder to teach. I wish I could teach my own kids as well but there are so many rules and paperwork to be done just to be able to step on the ice. I miss the interaction with younger skaters and just to be able to pass on some of the passion I got from my coaches to a new generation. I think I don't fit in the new skating model anymore but I'm okay with it. The new generation will do a great job I'm sure.

A: I'm addicted to sci-fi movies. I can't get enough of them.

Q: Who are your three favourite figure skaters of all time and why?

A: Kurt Browning, Brian Orser and Steven Cousins. These guys were great on the ice but even greater off the ice. I was lucky enough to tour with them for a few shows and they showed me great support when I was the new kid on the block. Kurt is a living legend; he is figure skating. Brian was the first skater I ever saw on television and I was really impressed by his triple axel. Steve was a great competitor but it is as a professional skater I learned to appreciate him. I always felt this guy was really happy to be on the ice and doing what he really loved.

Q: What advice would you give to a skater who was having a hard time dealing with the pressures of competitive skating?

A: Wow, this is not an easy question! When you prepare yourself well, pressure is less of an issue because your body will do what needs to be done. This is why we repeat jumps and programs so many times during a season. Always remember that everyone feels pressure no matter what. Always try to establish what works for you with your coach. Competition simulations or invitationals become vital tools in figuring out what works for you before the most important events. Also, your attitude is ninety nine percent of the time the cause or the solution to a problem. I remember that most of the kids at my training center would be sad all day when they didn't have good practice session. I would always try to be positive even after a bad day. I remember a younger skater (his name was Kevin) coming to me after one of my worst weeks of training in months and he asked me why I was in a good mood even after a very bad week of training. I said to him: "I refuse to let one day, one week or even one month, define how I'm going to walk out of the rink". I always felt that I was lucky to be skating and even a bad day at the rink, was still a day spent on the ice.

In order for this blog to reach a wider audience, I could sure use a little help. All you have to do is "LIKE" the blog's Facebook page at http://www.facebook.com/SkateGuard for instant access to all of the new blog articles, features and interviews as they are made available. I also share daily updates and headlines from the skating world, videos and much more that's not here on the blog, so if you love figure skating as much I do, it would really be rude not to get on that inside edge! You can also follow all of the fun along on Twitter at http://twitter.com/SkateGuardBlog. If you know someone who loves skating, tell them! It's all about getting a dialogue going on! Fabulous skating is too fabulous to keep secret. Am I right or am I right?
Posted by Skate Guard Blog at July 15, 2014
Email ThisBlogThis!Share to TwitterShare to FacebookShare to Pinterest
Newer Post Older Post Home