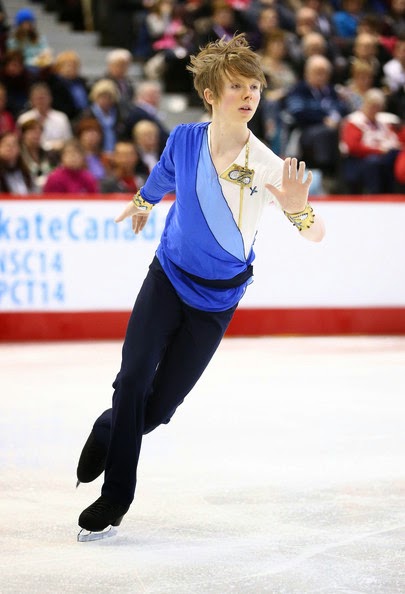 It simply wouldn't be Canada Month without an interview with Olympic Silver Medallist, Four Continents Champion and four time Canadian Medallist Kevin Reynolds. Following in the footsteps of 'quad king' Timothy Goebel (the first skater to land three quads in one program), Reynolds has certainly made some history of his own in the quad department. He's the first skater to have landed two quads in the short program and also the first to land five - yes FIVE! - quads in one competition, which he accomplished at the 2013 Four Continents Figure Skating Championships in Osaka, Japan. Reynolds, who has also represented Canada at four Junior World Championships and five senior World Championships, was so gracious to take the time from his off-season training to talk with me about his successes to date, the quad race, his fabulous hair, working with Joanne McLeod and a who's who of skating's greatest choreographers and his goals for the 2014/2015 season. Sit back, relax and enjoy a great read:

Q: Your career has been full of such wonderful successes. You've represented Canada at the Winter Olympics and five consecutive World Championships, won the Four Continents Championships, competed at both junior and senior Grand Prix events around the world and won four medals at the senior level at the Canadian Championships as well. Reflecting on everything so far, what are your proudest moments or most special memories?

A: I feel very fortunate to have had these opportunities to represent Canada. First, I would say competing at my first World Championships in 2010, as it was a special feeling to have been competing against all the best skaters in the world together for the first time. Being the first skater complete two quads in a short program was another milestone for me - I will never forget the rush I felt when it happened. Of course, winning the Four Continents Championships has to be one of my best memories. I achieved something that I could have only dreamed about when I was a kid. I will never forget the wave of emotion I felt after the long program, and hearing the national anthem played from the top of the podium. Lastly (despite the turmoil I experienced leading up to them)) the whole experience of the Olympic Games in Sochi was incredible. It was something I had imagined since I started my skating career and the experience certainly did not disappoint! From taking part in the opening ceremonies, to the thrill of winning a medal together with my long-time teammates - and all the lows and highs throughout the month - it made for an absolutely unforgettable experience.


Q: This past season you had to deal with losing the momentum you'd gained after a really strong season the year previous that saw you finish fifth at the World Championships because of skate programs that kept you sidelined for much of the pre-season and fall. How stressful was trying to 'cram' to get yourself back in the form you did to make it on that Olympic and World team and how are your skates working out for you now?

A: Needless to say, it was a difficult and frustrating year. It wasn't so much about cramming to get things ready - heavy training isn't a problem for me - it was more coming to terms with the fact that things weren't going to get any better (even after desperately trying everything I could) and that I would just have to grit my teeth and fight for the rest of the season. It was especially frustrating considering the success that I had in the previous season, and that these unprecedented problems were occurring during the crucial training period leading up to the Games. I don't want to think about the amount of stress that my team and I endured. It isn't something I want to remember. Now that the season has finished, we have had the time to fit the skates accurately and create a better fitting boot, without the stress and pressure of getting everything done quickly. The result is that I am now feeling good with my new equipment, and that hopefully, these problems will never plague me again in my career.


Q: Your arsenal of quads is simply cray. You landed your first one at fifteen and are now attempting (and often landing) more than one per program. How do you make them look so easy and what's your next technical challenge to yourself?

A: Our goal as skaters is to make things look easy, but I can tell you that it definitely isn't! The timing has come after years upon years of training, good teaching and a lot of personal motivation. Ever since I started watching skating on TV, I was in awe of quadruple jumps - the height, the speed of rotation, how spectacular they looked as a whole. I didn't know how at that age, but I told myself that one day I would do them as well. It's always been a dream of mine to do something that no other skater has done before. Now, I want to be the first skater to land a quadruple loop in competition. I am aware that there are other skaters who have tried and even landed it in practice, so my motivation in this post-Olympic season is higher than ever to be the first to do it in competition.

Q: You are coached by Joanne McLeod, who is regarded by many as one of Canada's top coaches. What makes your relationship with her work so well and what have you learned from choreographers you've worked with like Shae-Lynn Bourne, Lori Nichol and Tatiana Tarasova that has changed or improved your 'day to day skating'?

A: I think it is the trust between us. I started working with her when I was nine, so it's been quite the journey we've been on together. We've been there for each other through the best and the worst of times, and this has made our bond even stronger. I think our trust is a large part of what has helped us though the most difficult season in my career. It is thanks in no small part to her that I was able to reach this far in my career. I feel very fortunate to have had the opportunity to work with many of the best choreographers in the world. I think everyone has, in their respective ways, contributed to my development both as a skater and as a performer. It wasn't limited to only these things of course, but to give some examples, I think that Tatiana taught me a lot about program construction, footwork, and performance skills. With Shae-Lynn, I was able to discover my love of performing. With Lori, I was able to learn about the details and nuances in my skating and performance. Everyone who I've worked with has given me valuable knowledge to which I can draw from when practicing at home, and also when competing.


Q: Looking forward to another season, what are your goals and what's next for you? What can you share about new programs?

A: I want to start the season off strong. There should be little to hold me back now. My goal is to medal at the Grand Prix events this autumn and in doing so, hopefully make the Grand Prix Final. I also want to win the National title this year. I would like to perform my programs this year to the best of my ability, which is something that I wasn't able to do last season. As for the program choices this year, I don't want to say just yet, but I have worked with Kenji Miyamoto recently on a new program, and I will soon be working again with Shae-Lynn Bourne.

Q: Everyone knows your hair is kickin'! If you had to offer one piece of 'hair advice' to just about everyone, what would it be?

A: (laughing) I can offer advice, but I don't know if many people would take it. I would say be yourself with it. There are so many styles to choose from! Try something that shows a bit of your personality. If we're talking about hair care, the more natural, the better. Stay away from cheap shampoos and conditioners which contain sulfates and other harsh industrial chemicals, and look for something that is certified organic by a third party.


Q: What is your favourite book, song and comfort food?

A: I don't have a particular book that is a favourite. Same as for songs. I listen to a variety of genres and artists - from classical to electro - but I wouldn't pick one song as a favourite. As for comfort food, my favourite recently has been Doria – a baked rice gratin. If you haven't heard of it, search it up! It's delicious.

A: As a kid, I looked up to Evgeni Plushenko for his competitive spirit, jump technique, and desire to push the technical envelope. It was exciting and inspiring to watch the rivalry he had with Alexei Yagudin, and this motivated me even further to reach the top level. I never got to see her skate live, but I was in awe when watching videos of Midori Ito and I still am! She had an incredible amount of power to her skating, and of course, had a fantastic jumping ability. Her desire to succeed in the face of all odds inspired me as well. I also enjoy watching Mao Asada perform. Not only does she push the technical envelope, but she performs beautifully as well.

A: I have Scottish and Ukrainian heritage.

Q: What do you love more than anything about being out on the ice?

A: The feeling of freedom. Well, actually, the feeling of spinning. I loved to spin and jump when I was a kid, and it's still my one of my favourite things about being on the ice. I also enjoy the freedom to express myself when I perform. I enjoy being able to take on different styles and characters that are different from the everyday me.

Didn't you just LOVE this interview with Kevin? Well, don't just stand there! In order for this blog to reach a wider audience, I could sure use a little help. All you have to do is "LIKE" the blog's Facebook page at http://www.facebook.com/SkateGuard for instant access to all of the new blog articles, features and interviews as they are made available. I also share daily updates and headlines from the skating world, videos and much more that's not here on the blog, so if you love figure skating as much I do, it would really be rude not to get on that inside edge! You can also follow all of the fun along on Twitter at http://twitter.com/SkateGuardBlog. If you know someone who loves skating, tell them! It's all about getting a dialogue going on! Fabulous skating is too fabulous to keep secret. Am I right or am I right?
Posted by Skate Guard Blog at July 24, 2014
Email ThisBlogThis!Share to TwitterShare to FacebookShare to Pinterest
Newer Post Older Post Home