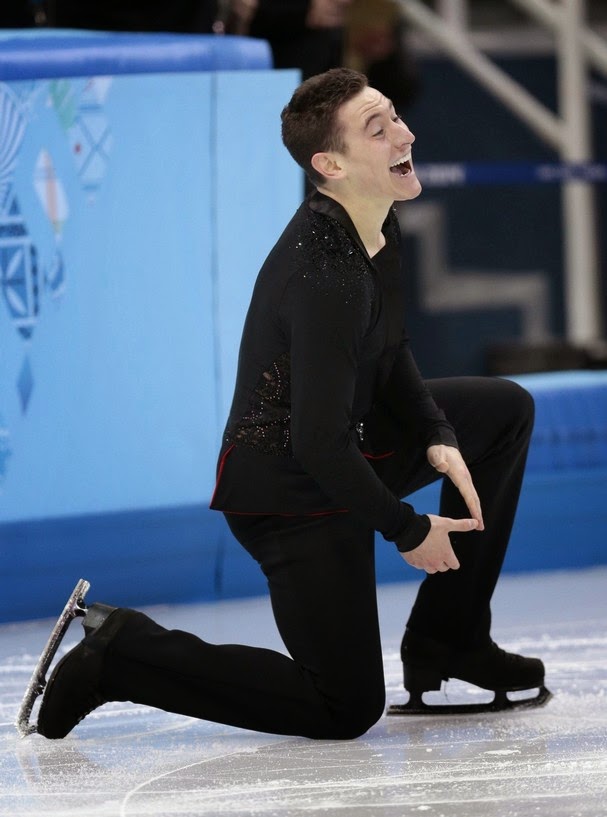 The Olympic dream is one that motivates so many skaters throughout their careers, but the sheer reality of life is that very few skaters actually get to live that experience. Through the inclusion of the new team event at the 2014 Winter Olympic Games in Sochi, Russia, four time British Champion Matt Parr got to live his Olympic dream - and skated brilliantly. Since announcing his retirement from competitive skating and taking up professional skating aboard the Royal Caribbean Legend Of The Seas cruise ship, in this wonderful interview Matt reflected on his competitive career, talked about the issues facing both competitive skating internationally and within Great Britain, his future, his heroes both on and off the ice and much more. You're going to just love reading this one!:

Q: After winning the 2003/2004 British junior title, your progress and transition to the senior ranks was slow but sensational. Now, in 2014 you can look back and say you're a four time British senior men's champion. What has been the key to your longevity and endurance in the sport and what kept you going?

A: I won the junior title at the age of thirteen and for me, that was maybe a little too early. I wasn't quite mature enough physically or mentally at the time and for those reasons, I feel I struggled to get myself where I needed to be for the next few seasons. I think it's quite generous to say I've been in the sport for a long time. I retired at the age of twenty three, so I can't say I've had longevity in the sport. In terms of what motivated me to go into the rink everyday, in my last season it was the Olympics. That's all I ever wanted to achieve from a young age, so having the as the carrot dangling in front of my face everyday is what got me through.

A: Representing your country at any competition is always an honor, but to do so at an Olympic Games is like nothing I can describe. So, without a doubt, that is the highlight of my career. Becoming the first British male to win the Mid Atlantics in New York in decades was also a pretty big highlight for me, too.

Q: You're really a multi-talented person, formerly playing football and being quite involved with gymnastics. Word on the street is that you can also juggle, ride a unicycle and balance a chair on your chin. Where did you learn all of these circus tricks and what's the next trick up your sleeve?

A: When I was younger I would spend long days in the ice rink, so to help pass time in between seasons I would learn new things to keep my busy. My parents knew I had an extremely short attention span too, so they'd buy me random things to keep me entertained (for example, the unicycle, juggling equipment, diablos and the like). The gymnastics wasn't anything I did for any great period of time. I used to throw myself around and teach myself back tucks and things, so my parents found a local gymnastics school for a while, so I could purge myself of the need to do these in a safer environment I guess. I entered one competition and won. I retired immediately afterwards. Maybe I just like to prove to myself and to other people that I can do things. Now that I'm a little older and wiser, I'm not so courageous in attempting new things. I've now realized the fragility of my own body so I can't throw myself into things so casually now! I'm going to stick to some less strenuous things from now on. I'm currently learning the back tuck on the ice, though. That's as far as exciting as is going to get from now on, I fear.

A: Alexei Yagudin probably comes at the top of the list. He was technically as consistent as anyone I've ever seen and had a charisma on the ice which drew you in. To finish off his career with the memorable routines in Salt Lake 2002, he's secured his position in my top three skaters although watching them back now, the programs seem so juvenile compared to today's athletes. The feeling it gave me as a kid watching them is enough. Daisuke Takahashi would be the next one. His artistry on the ice is just incredible. His performances evoke emotions within yourself unlike any other skater I've witnessed. Just a truly exquisite skater who puts everything into his performances, often at the expense of his technical mark. As an artist on the ice, there is no one better, in my opinion. If I could skate like any skater I've ever seen, it'd be Daisuke. I'm only going to mention these two as my favourite skaters, as they are the main ones who have inspired me. I must give special mentions to the likes of Patrick Chan, Yuzuru Hanyu, Brian Joubert, and my good friend Javier Fernandez. These are skaters I enjoy watching and are terrific athletes.

Q: What is the biggest problem facing the skating world today and how would you solve it?


A: I guess the biggest problems are financing and the modernization of the sport. The ISU seems to be attempting to modernize the sport with the new rule allowing vocals in every discipline now. I feel these decisions are being made to increase or maintain revenue from the TV channels. That coupled with the decreasing numbers of entries allowed per event and tougher selection procedures for ISU Championships could make it harder for young talent to break through. It's not rare now that Grand Prix's can't fill the entry allocation with governing bodies unwilling to fund a replacement competitor. Inconsistency in judging is an area which I also fear could drive the formally avid follower to lose faith in the sport, too which, in turn, could lead to the IOC discrediting figure skating as a sport and removing it from the Olympics. That would be the death of the sport for me.

Q: Was the decision to retire from competitive skating a difficult one?

A: I always knew I didn't want to be competing into my late twenties, so I always had planned to retire this year. Plus, I was solely motivated by the Olympics and I couldn't have pushed myself through another cycle for PyeongChang. I'm going to do shows for a short period before moving onto life away from the ice.

Q: The history of skating in the UK is really absolutely fascinating. John Curry, Robin Cousins,
Madge Syers, Jeannette Altwegg and Jayne Torvill and Christopher Dean have all brought home Olympic gold for your country. What are your thoughts on the present state and future of skating in England?

A: British skating needs to go in a new direction, in my opinion. There are a lot of people who care greatly about the sport but are unable to break the current trend and create a brighter future. I'm very hopeful this can be changed but I feel it needs a person to come in and deconstruct it, rebuild it and be supported by everyone involved with the governing body. The truth is Britain isn't blessed with an abundance of talented skaters, so when there is one found, they need to be nurtured correctly. I've seen many good British skaters fall short of their full potential through the lack of support from the governing body, solely cast off into the pile of the forgotten skaters.

Q: Who are your heroes?

A: I wouldn't really say I had heroes, but the people I admire most in life are my parents. Without them I couldn't have achieved anything in the sport. They supported my skating career from my first time on the ice until I retired after Sochi. I received no funding whatsoever, so none of this would have been possible. Sporting heroes would be Alan Shearer, Sir Steve Redgrave, Sir Chris Hoy, Peter Beardsley and Katherine Grainger to name a few.

A: I'm a pretty open book, so I can't think there's much about me that people don't know. If anyone wants to know they're welcome to ask me on Twitter.

A: I can't think of one major mistake that made me think differently, but the biggest thing I've learned over the time is to always do what makes you happy. I think most people have a good sense of morality, so as long as you're not hurting anyone else with your actions then do what helps you enjoy life. If you aren't enjoying your training, speak to your coach and try something different. They also want what's best for you so they'll listen. If you aren't happy with things in your life, then make a change. I know it's not always easy but we only get one shot at life so we should be nice to one another and enjoy every moment we can!

Did you love this interview with Matt as much I did? Well, don't just stand there! In order for this blog to reach a wider audience, I could sure use a little help. All you have to do is "LIKE" the blog's Facebook page at http://www.facebook.com/SkateGuard for instant access to all of the new blog articles, features and interviews as they are made available. I also share daily updates and headlines from the skating world, videos and much more that's not here on the blog, so if you love figure skating as much I do, it would really be rude not to get on that inside edge! You can also follow all of the fun along on Twitter at http://twitter.com/SkateGuardBlog. If you know someone who loves skating, tell them! It's all about getting a dialogue going on! Fabulous skating is too fabulous to keep secret. Am I right or am I right?
Posted by Skate Guard Blog at August 09, 2014
Email ThisBlogThis!Share to TwitterShare to FacebookShare to Pinterest
Newer Post Older Post Home
"As a rule an author has one or two popular ways of contrasting the past with the present. He can treat the past as lying in comparative doleful ignorance, or he can explain that the past was infinitely superior to the day we live in. Of course, either method is the popular journalism of the moment, and in reality there is no sharp contrast, but a gradual transition which leads the past into the present." - Joel B. Liberman, Skating Club Of New York