Afternoons Of A Faun 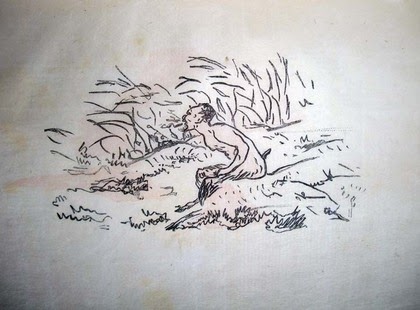 In 1876, French author Stéphane Mallarmé penned the poem "L'après-midi d'un faune". It described the sensual awakening of a faun who had just awoken from an afternoon sleep and recounts the faun's encounters with several nymphs during a morning dreamlike sequence. It inspired Claude Debussy's "Prélude à l'après-midi d'un faune", a revolutionary composition that helped spark the modernist movement in music. Debussy's music and Mallarmé's poem came to life with movement in the ballet "Afternoon Of A Faun", choreographed by Vaslav Nijinsky and first performed on stage at the Théâtre du Châtelet in Paris in 1912, with the lead role of the faun danced by Nijinsky himself. The choreography - non-traditional, angular and sensual - sparked debate and mixed reviews among critics, who called it everything from "perfect" to "crude". Although sadly never recorded, Nijinsky's ballet was revived in the 1980's and Debussy's "Prélude à l'après-midi d'un faune" also inspired ballets by Jerome Robbins and Timothy Rushton. In time, skaters began translating Mallarmé, Debussy and Nijinsky's combined legacy to the frozen stage in their own afternoons of a faun:


What better way to start with than with Janet Lynn, who (like Curry, who I'll talk about next) is one of a very few select skaters that I have a hard time finding words sufficient to properly do any justice. "Afternoon Of A Faun" became a signature piece for Janet throughout her "amateur" and professional careers and it's no wonder why. The freedom and controlled abandon in her movement is inspiring; her unbridled joy and attention to detail otherworldly. When you bring this music to life, a big part of it are those unexpected and wonderful movements to the crescendos in the orchestration. Janet brings the interesting to the table: the single axel into the double axel, the walleys in both direction into the back split and flying camel spin. Her carriage and the quality not only of each and every element but the edges and extensions is simply beautiful beyond words.

John Curry's contribution to professional and artistic skating is truly unparalleled. He legitimized skating as dance and skating as art and left a legacy in his huge and heartfelt body of work that really can't be touched. He CHANGED skating. Like Lynn, "Afternoon Of A Faun" was a signature piece for Curry, and his performance of Norman Maen's choreography coupled with exquisite costuming by Nadine Baylis made for the most authentic interpretation of Nijinsky's vision as I understand it. He captured and told the story through angular movement with the most gorgeous body line and USE of his body, capturing every little nuance and detail of the music almost to a science. The contrast and tension in arm movements and his connection with Catherine Foulkes in this piece was ice dancing at his finest. High art in every sense of the word.

Yuka Sato's interpretation of Debussy's rich score was simply gorgeous. I think taking on a piece of music like this, especially as it was so well known in connection to legends like Curry and Lynn, was a brave artistic choice and she pulled it off in every sense of the expression. I loved the two foot turns following that huge triple loop and the ebb and flow balance of speed and softness. I also love how she gets INTO the ice with her knees. Like Lynn, Sato finds such joy in the act of skating and is a natural at expressing the character of the music she's skating to. A beautiful and rich interpretation.


What I love about Ilia Klimkin's interpretation is that clever, avant garde yet elegant, almost Alexandr Fadeev like quality in his skating. His interpretation is INTERESTING. I think back to skaters like Klimkin, Olga Markova, Laetitia Hubert, Vanessa Gusmeroli and Laurent Tobel from that era that had such original and interesting choreography and it makes me really miss the 6.0 judging system even more. I digress as usual. Loved the spins in both directions and the triple salchow out of that spin exit was sheer insanity. How? There was so much more though. A walley into a triple axel, the running, the Cantilever... Despite some jump problems in this particular performance, Klimkin breathed fresh life into Debussy's music and offered a unexpected contrast.

I should be saying 2014 Olympic Gold Medallist Carolina Kostner, but the world's mad. Like all of the skaters I'm talking about in this blog article, Kostner is another skater who has been fearless about tackling BIG music... from "Bolero" to "Ave Maria" to "Afternoon Of A Faun", Carolina doesn't shy away from a challenge. Kostner's interpretation of the music was hearty and layered as well. There's a certain risk and reward to placing big ticket jumps on musical crescendos but in this program, Kostner pulled it off at least twice... the triple loops were placed perfectly. The footwork sequence was delightfully musical and didn't have that IJS windmill in a windstorm up and down labored feel to it whatsoever and I thought the placing of the spin combinations was brilliant. A fine example of a skater making something out of the IJS system's restraints and delivering a really beautiful program in spite of that challenge.


I think "Afternoon Of A Faun" was just the right vehicle for Adam Rippon. Being the fluid skater he is, this was a perfect piece of music to capitalize on his very styled and mature presence on the ice. It was a well constructed program as well, with the spread eagle into triple loop well placed to the music. Like in Curry's interpretation, Rippon made great use of his arms as well. I also was a big fan of the footwork sequence's placement in the program and two Rippon lutzes really put an exclamation point on the latter part of the program, setting up the program's ending to succeed. A Tom Dickson masterpiece, as most Tom Dickson programs are.

I think the wonderful commonality in all of these programs is that all 6.0 of these skaters was able to, in their own unique ways, breathe such life into a piece and a story that started in the nineteenth century. Their Afternoons Of A Faun were in turns joyous, moody, reverent, irreverent, interesting, expressive and choreographically well constructed and delivered. There's something to be said for just going out and skating lights out to a beautiful piece of music and this Debussy gem has really been VERY good to skating.

In order for this blog to reach a wider audience, I could sure use a little help. All you have to do is "LIKE" the blog's Facebook page at http://www.facebook.com/SkateGuard for instant access to all of the new blog articles, features and interviews as they are made available. I also share daily updates and headlines from the skating world, videos and much more that's not here on the blog, so if you love figure skating as much I do, it would really be rude not to get on that inside edge! You can also follow all of the fun along on Twitter at http://twitter.com/SkateGuardBlog. If you know someone who loves skating, tell them! It's all about getting a dialogue going on! Fabulous skating is too fabulous to keep secret. Am I right or am I right?
Posted by Skate Guard Blog at September 20, 2014
Email ThisBlogThis!Share to TwitterShare to FacebookShare to Pinterest
Newer Post Older Post Home