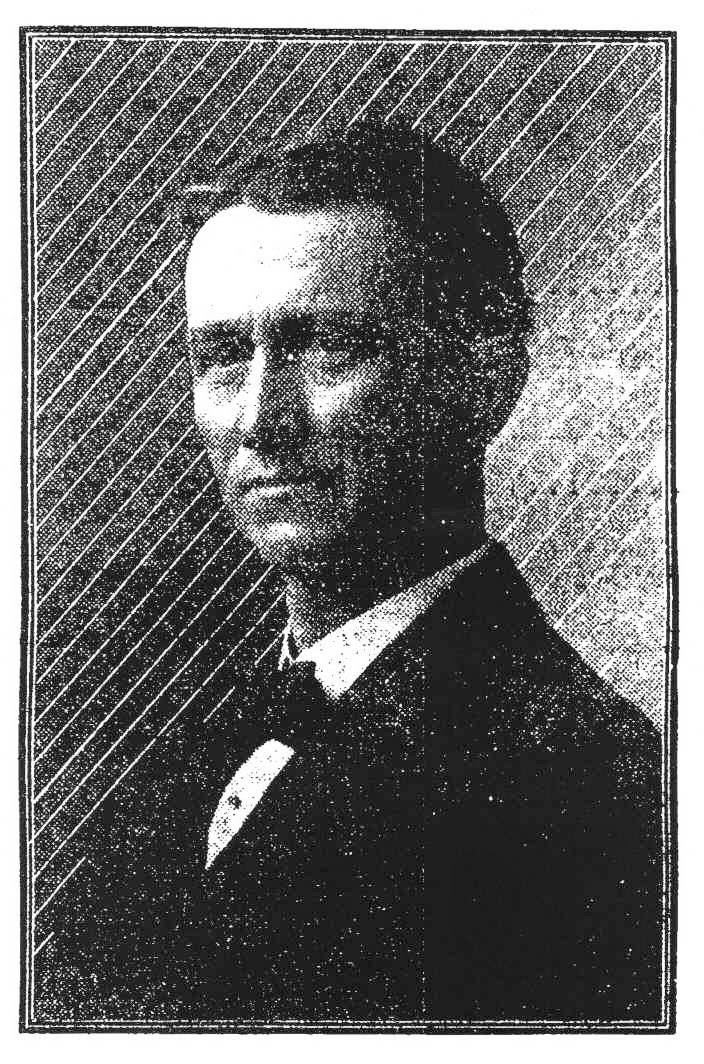 Situated along the historic Missouri River in Kansas is a small town of just over ten thousand named Atchison. The town's biggest claim to fame is being the birthplace of doomed aviatrix Amelia Earhart, but the story of the town's former doctor and mayor Charles C. Finney is a fascinating one - with both a figure skating and rather spooky connection.

The youngest son of Michael and Kate Kathrens Finney, Charles began his career in the medical field as a bookkeeper and office assistant to Dr. Dan Holland (that's Dan HOLLAND, not Dan HOLLANDER) and it was Dr. Holland that encouraged Finney to go off to medical college, obtain a degree and open his own practice... which he did. While still working for Dr. Holland, Finney enjoyed success as a competitive figure skater. As the December 28, 1883 edition of the Atchison Daily Globe describes, "last evening the gold medal was awarded to Miss Florence Guerrier and Charley Finney the best couple skaters." A skilled figure skater and roller skater, a young Finney won local competitions and frequently appeared on the ice dressed as a female, billed as 'Miss Colby Of Baltimore'. He was apparently so graceful on the ice that no one could tell the difference or surmise his identity. Perhaps as a result of his gender bending act, Finney fell out of favor and when the competition was held again in 1885, the local paper noted that the event was open to all gentleman skaters, except Charles Finney: ""A prize of $5 in gold to the best gentleman skater in Atchison on New Year's night at the Palace rink, open to all gentleman skaters except C.C. Finney. A committee of ladies will give the decision. Music by Geo. Roth's band. Dancing at 10 p.m. Matinee for ladies and children in the afternooon. Admission, 10 cents; skates, 5 cents extra." Finney gave up his ice skates for roller skates and became a local roller skating champion instead.

Before receiving his medical degree in 1894, he was all over the papers again... and this time it had nothing to do with skating in drag. The October 20, 1887 edition of the Atchison Daily Globe reported that "Charley Finney and W.S. Anderson had a fight this morning, which came about in the way: A few days ago, a Miss Page, a sister-in-law of Anderson's, had a pocket-book containing $3 stolen from the dental rooms of Dr. Shulze. There were present in the room at the time a stranger and Charley Finney. Neither were accused at the time of taking it and the matter rested with an advertisement in the Globe until yesterday, when Anderson went to Dr. Shulze, and, according to that gentleman’s statement and that of Mr. Reid, of the packing house, accused Finney of taking the pocket-book. Finney heard this morning that he had been so accused, and went to the store of Mr. Anderson, and asked him to step up to the doctor's office, and retract his statement. Anderson said he had nothing to retract, and after a few words Finney struck him over the head several times with a heavy cane.  Nick Anderson, W.S. Anderson’s father, was present and drew a revolver, which he was prevented from using. Anderson claims that all he said was that the taking of the money laid between Finney and the stranger. He refused to cause Finney's arrest, saying that Finney would in retaliation cause his father's arrest for drawing a deadly weapon." That just sounds like a big old mess, now doesn't it?

Finney's medical career flourished upon his return from medical school in St. Louis and in 1914, he was elected Mayor Of Atchison, a position he held for two years until he was forced to step down in 1916 as the result of a scandal surrounding the selling of alcohol at a local Eagles Lodge. In the midst of controversy, he sought re-election but that didn't go so well for him. 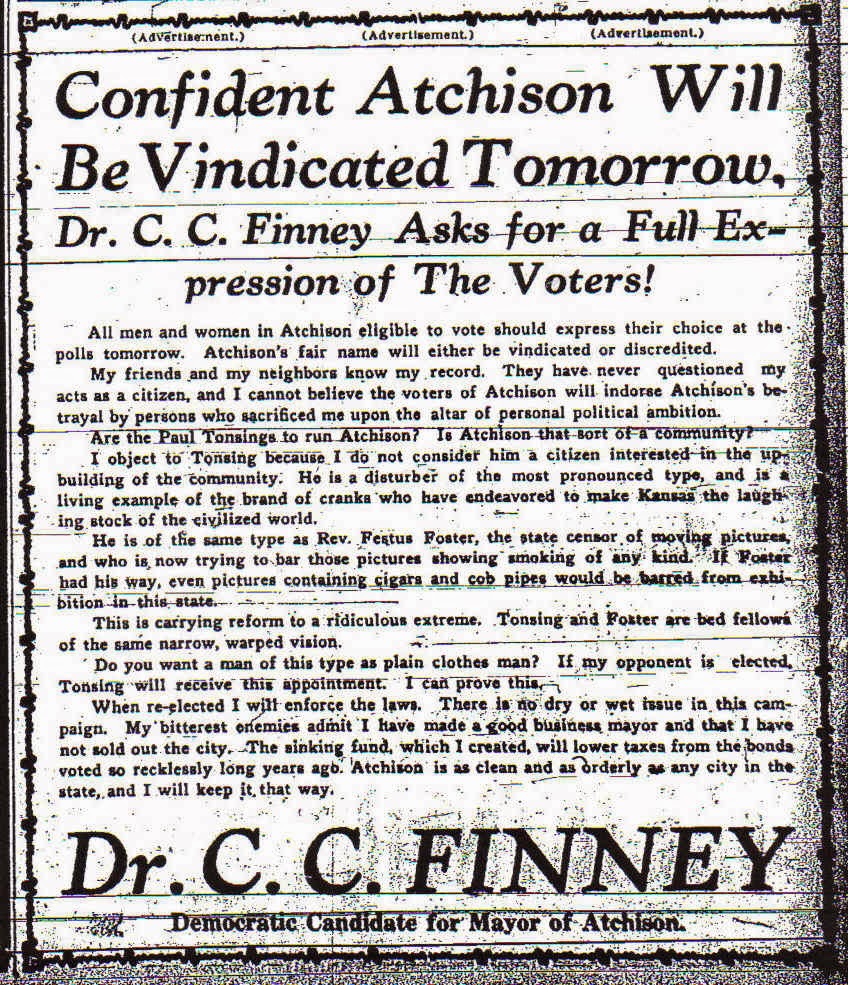 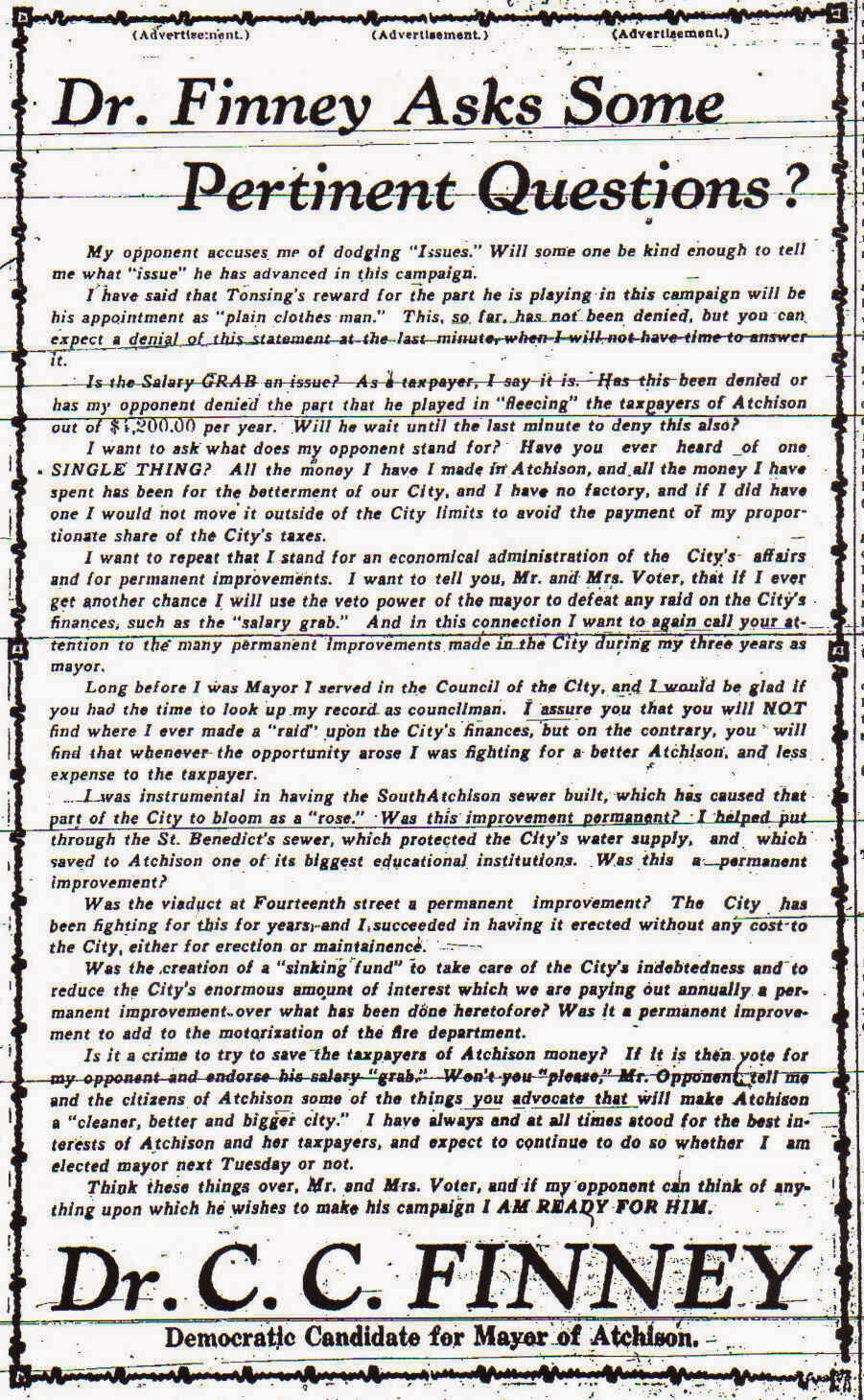 This fascinating story of Finney's life neglects to mention one important detail: the fact that the land where Finney's family home stood now boasts The Sallie House - which is infamously haunted. The Michael Finney (Charles' father) purchased and built a home on the property between 1867 and 1871. Michael died in that house in 1872 and in 1889, the house next door on the same property that was built by James Finney (Charles' other brother) was deeded to a woman named Johanna Barnes. Johanna was a recently divorced mother of three, with another 'bun in the oven'. She had been institutionalized in the state hospital in Topeka for mental instability and neighbors provided evidence to a judge that she was "violently insane". In July of 1899 however, her newest bundle of joy Frank Barnes was born. She was eventually released from custody TO Dr. Finney and returned to the home that James Finney built. On September 24, 1906, Johanna attempted suicide by turning on the gas in a downstairs room and laid down on a cot with her six year old son. They were both overcome by fumes, but she survived... and he died.

In 1992, Debra and Tony Pickman moved into The Sallie House with their then newborn son. Little did they know that they'd become regular guests on the FOX series "Sightings" as the result of their paranormal experiences. Debra Pickman explained that while living in the house "there have been full-bodied apparitions and objects flying through the air. Items have moved, been misplaced or lost only to reappear or show up later or at another location. Phantom furniture has been heard along with thumps, thuds, knocks, scratching, and the sounds of animals and disembodied human voices. Although some have been heard with the naked ear, there have been an amazing amount of EVP (Electronic Voice Phenomena) captured, further depicting the voices of men, women and children. Many have experienced extreme smells. Lastly, and most famously, there has been physical harm to the occupants and investigators in the form of scratches, burns and cuts."

Tony Pickman also shared with me his experiences in the Sallie House: "My wife's experiences and my own experiences were two very different ones. She experiences the nice side of things and mostly because she openly accepted that what was in our house was a little girl. With my Catholic upbringing I had a very different take on our earliest experiences and didn't want anything to do with it. For this reason, the entity in our house tried other ways to gain my acceptance; an innocent little girl, then showing itself as my wife, then as a matronly older woman (perhaps to scare me into accepting it). When I resisted these it began another game and infiltrated my dreams, thoughts, emotions etc. This was just the start. It got more physical and much worse. Over the years since leaving the house (staying only twenty two months) we investigated the house ourselves as well as other locations; all in all, we learned a lot. At times we are still bothered by these entities, but we have become used to identifying them when they are around and that is half the battle. Would we want to experience it again? Likely not, as it has definitely taken its toll on us."

Just really who ARE the ghosts of Sallie House? Michael Finney? Johanna and Frank Barnes? Or perhaps that female ghost is really the ever convincing 'female skater' Dr. Charles C. Finney (Miss Colby Of Baltimore), back from the grave and severely ticked off that his figure skating (and mayoral) careers were cut short in their heights? One can only speculate... but if it is an angry Finney and it does have to do with his skating career being cut short... it would surely be the longest skating related grudge in history.

Skate Guard is a blog dedicated to preserving the rich, colourful and fascinating history of figure skating and archives hundreds of compelling features and interviews in a searchable format for readers worldwide. Though there never has been nor will there be a charge for access to these resources, you taking the time to 'like' on the blog's Facebook page at http://www.facebook.com/SkateGuard would be so very much appreciated. Already 'liking'? Consider sharing this feature for others via social media. It would make all the difference in the blog reaching a wider audience. Have a question or comment regarding anything you have read here or have a suggestion for a topic related to figure skating history you would like to see covered? I'd love to hear from you! Learn the many ways you can reach out at http://skateguard1.blogspot.ca/p/contact.html.
Posted by Skate Guard Blog at October 03, 2014
Email ThisBlogThis!Share to TwitterShare to FacebookShare to Pinterest
Newer Post Older Post Home