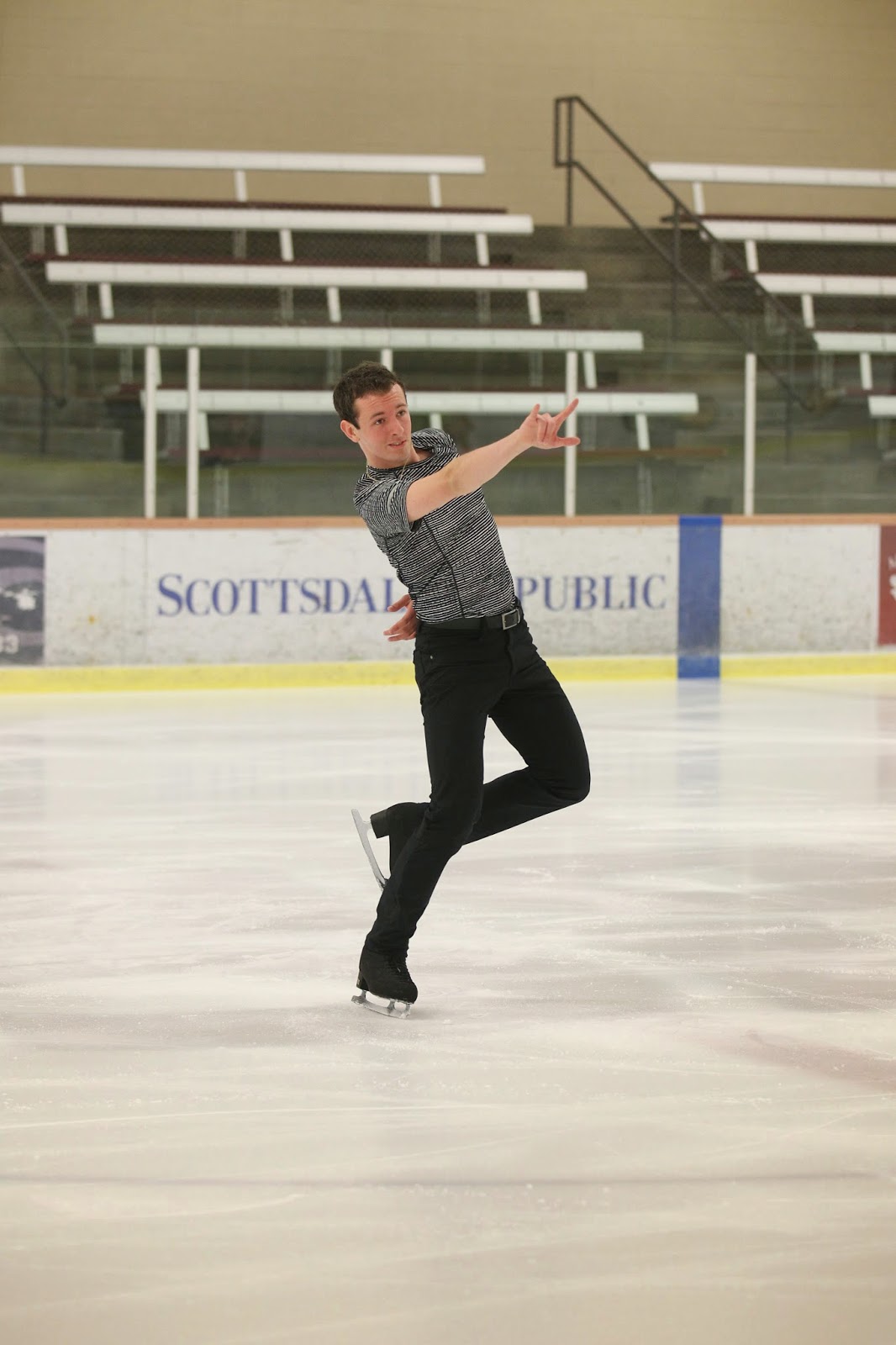 As we start another quadrennial Olympic cycle, it's all about those fresh faces and skaters stories that we will see unfold in the coming years leading up to the 2018 Olympics in Pyeongchang, South Korea. One of those skaters is Daniel Kulenkamp, a young and up and coming skater who trains in Arizona and made his Junior Grand Prix debut earlier this season, handily placing in the top ten in his first try. I appreciate so much Daniel taking the time from his busy training schedule to talk to me about his career so far, goals for the future, favourite skaters and much, much more in this Skate Guard interview:

Q: You've had some great successes so far in your competitive career. After finishing fifth on the novice level at the 2013 U.S. Championships, you moved up to the junior ranks this past season and so far this season have won the junior men's events at the Golden West Championships and U.S. Challenge Skate and competed internationally on the Junior Grand Prix circuit. Looking at what you've accomplished in competition, what memories or moments are most precious to you?

A: My fondest moment so far in skating is when I found out I had been assigned the 2014 Croatia Cup. I had just finished a twelve hour drive home from Salt Lake City (this was right after Challenge Skate) and was sitting at home when I got the call. It's been a dream of mine for years to compete for Team USA and when I got the news I started jumping up and down while still talking (which is something I never do). I was so overwhelmed by emotion; my hard work was paying off. Another moment that's very close to me is from the 2013 U.S. Championships in Omaha. A good twenty friends drove down from Minnesota just to see me compete at my first national competition. After I finished my short program, they threw so many stuffed animals on the ice; I think it may have been the most I saw all week. That moment means so much to me, because it reminds me how many people I've got behind me. I am so fortunate to have such a great support group. Figure skating isn't an easy sport, but it does make it easier when you've got great friends and supporters.

Q: You're from Minnesota but currently live and train in Arizona. What first drew you to the sport and when did you first decide that skating was something you wanted to focus your attention on seriously?

A: I started skating when I was very young, at four years old I think. My dad had coached high school hockey for many years, but he wanted me to take some lessons on figure skates before he gave me a hockey stick. After a year or so of taking lessons, my parents asked me if I wanted to try hockey. I seem to remember not liking the feeling of hockey skates as much as figure skates. As I kid, I didn't like change, and I didn't see why I needed to switch to hockey skates, so I stuck with skating. I also had a goal to get all the badges that they had displayed on the wall. In addition to skating, I played soccer and was a pretty good swimmer. Around the age of twelve, I decided to focus mainly on skating. I didn't enjoy swimming too much, but I absolutely loved skating. I loved performing for people and I loved to jump. This is when ideas of making it to the Olympics started entering my head.  However, moving to Arizona last March was the biggest commitment of all. I knew I needed a change in training and I had taken lessons from Doug and other coaches at the Ice Den while on vacation there a year earlier. It just felt right to me. The atmosphere at the rink was so positive, and the coaches are just phenomenal. It's where I wanted, and needed, to be.

Q: This year, your short program is set to Led Zeppelin's "Black Dog" and your free skate to a Frank Sinatra medley. How did both of these programs come together and what do you love most about performing them?

A: "Black Dog" was actually my show program at the Ice Den's annual show. The theme was 'Britice Invasion,' and I was having trouble coming up with ideas. I asked Doug, and his wife Lara came up with idea for "Black Dog". I thought it was a bit outside my comfort zone, but was excited for it all the same. Steven Cousins choreographed it, and we all fell in love with it. So many people loved it we thought we'd give it a chance as my short program, and so far it's worked out pretty well. As for my long, I've always wanted to skate to Frank Sinatra, but never had the opportunity. I love his music and this seemed to be a perfect time to do it. My long program this year is one of my favorite programs I've done.


Q: What are your main focuses in training and how do you plan on improving your base value and TES score as well as PCS scores as the season progresses?
A: One of my main focuses in training is pushing the choreography of my programs, both physically and emotionally. Both my short and long are at the point where I can execute them cleanly, so I want to improve the choreography and the emotional connection to the audience and judges. I also continue to focus on keeping jumps consistently clean and well executed, as well as adding more difficult entrances to jumps and spins.
Q: You've worked with some pretty fantastic skaters in their own right - Doug Ladret, Caryn Kadavy, Steven Cousins... What has each brought to your skating?

A: I like to say that Doug has fast-tracked my skating. With his guidance, I've gone from placing thirteenth at the U.S. Championships last January, to competing at a Junior Grand Prix less than a year later. My technique has improved greatly because of him. He really is my rock when it comes to training and competing. Doug knows exactly what to say to keep my head on straight. He also did a fantastic job choreographing my free skate. He and his wife Lara have been such great influences, on and off the ice, and I love working with both of them. Steve is awesome. He has a great personality and a good outlook on skating. He's pushing my choreography to new heights as well as throwing me far outside my comfort zone. He's great to go to for advice about anything; it was great to talk to him about what to expect at my first international competition and I used many of the things he told me when I was in Croatia. It prepared me for the new things I didn't know about or didn't expect. Caryn helped bring my choreography to a new level throughout my last year at novice and first year at junior. At a time when my attitude towards skating wasn't so positive, she helped me fall back in love with the sport.
Q: On a day when you're NOT skating, where would we find you?

A: You'd most likely find me at home reading a book or somewhere with my family. I'm a big family guy, and I love spending time with my parents, grandparents, and brother. They are my biggest source of support and I’m incredibly lucky to have a family like them. I’m also an avid reader.
Q: Who are your three favorite skaters of all time and why?

A: My three favorite skaters are Scott Hamilton, Ryan Bradley and Evan Lysacek. Scott Hamilton, in my opinion is the best entertainer in skating's history. His show programs are so great and he's an Olympic Champion on top of it. I love his story of perseverance in the face of all the troubles he had. His story truly is inspiring. I like Ryan Bradley because he always stayed true to himself. He's a great entertainer, and his competition programs always reflected that. I like Evan because he worked hard. People said no one ever worked harder than him, which is something I try to emulate every day in training.
Q: What's one thing most people don't know about you?

A: I speak Spanish. I'm not fluent yet, but I've been speaking it for over a year now and I love it. Arizona is such a great place to practice.
Q: What is the biggest lesson skating has taught you?

A: Really loving what you do. That's the most important thing. Any goal worth pursuing is not going to be easily attainable. It takes years of perseverance and sacrifice to make it happen. If you don’t love what you’re doing, the hard work and sacrifices necessary feel pointless and painful. There’s been a lot of difficult things that skating has put me through - and I'm sure there will be more in the future - but every situation has been worth it to me, because I know what I'm aiming for. Though it will be difficult, I can't wait for the next challenge.

Didn't you just LOVE this interview? Well, don't just stand there! In order for this blog to reach a wider audience, I could sure use a little help. All you have to do is "LIKE" the blog's Facebook page at http://www.facebook.com/SkateGuard for instant access to all of the new blog articles, features and interviews as they are made available. I also share daily updates and headlines from the skating world, videos and much more that's not here on the blog, so if you love figure skating as much I do, it would really be rude not to get on that inside edge! You can also follow all of the fun along on Twitter at http://twitter.com/SkateGuardBlog. If you know someone who loves skating, tell them! It's all about getting a dialogue going on! Fabulous skating is too fabulous to keep secret. Am I right or am I right?
Posted by Skate Guard Blog at November 07, 2014
Email ThisBlogThis!Share to TwitterShare to FacebookShare to Pinterest
Newer Post Older Post Home