Katarina Witt: 6.0 Of Her Best Programs EVER! 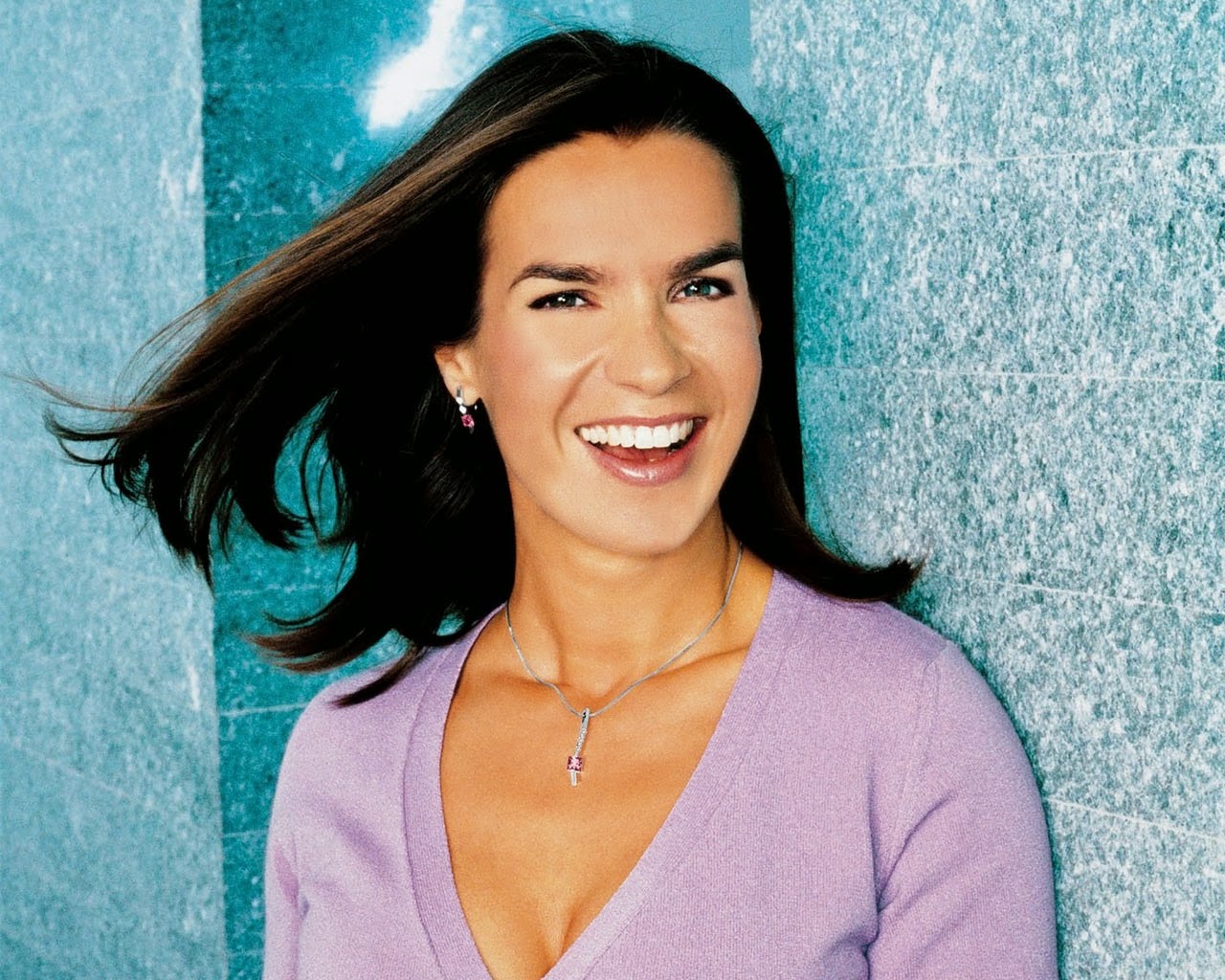 Trying to name 6.0 of two time Olympic Gold Medallist and four time World Champion Katarina Witt's best programs is like trying to name six of Julia Child's best recipes, six of Tracy Chapman's best songs or six of one of those football people's best touchdowns or home runs or whatever it is they do. I don't know anything about the team sports. I do know a thing or two about fantastic skating and as far as understanding of music, presence and artistry on the ice, Katarina Witt is one of the most talented and memorable stars the sport has ever seen. There's something larger than life about her skating that draws you in and something so authentic about her interpretations of music that puts you at ease and makes you completely in awe of her talent. Let's celebrate Katarina's December 3 birthday by taking a trip down memory lane and enjoying 6.0 of her best programs! Grab yourselves a hot beverage (I sound like Sheldon from Big Bang Theory) and make the time to take in 6.0 of Katarina's best programs:

I'M THE ONLY ONE

I may not swing in Katarina's direction, but it doesn't take an interest in beautiful women to grasp why she received over thirty five thousand love letters from men around the world after her first Olympic win at the 1984 Sarajevo Olympics. Always the seductress on the ice, she used the old maxim "sex sells" to her advantage both as an "amateur" and professional. Her hearty and flirtatious program to Melissa Etheridge's hit "I'm The Only One" (choreographed by Michael Seibert) surely brought her many more admirers around the world when she performed it during the 1995/1996 Stars On Ice tour and in professional competitions like the 1996 World Team Skating Championships in Milwaukee, which helped secure Team Europe's win over skaters from the U.S., Canada and Russia. What I love about this program is not only the music and costuming but the structuring. It plays to her strengths and plays to the audience and that's really what an entertaining program is about. This one's a gem.


The Academy Award winning picture "Schindler's List" is one of history's most important films, sharing with a whole new generation the story of The Holocaust... and reminding me of Anne Frank, the skater. In a program choreographed as a joint effort by Katarina and Diana Goolsbee, Katarina's "Schindler's List" interpretation centered on the story of the girl in the red coat, one of only two glimpses of color in a sea of grey and despair in the black-and-white picture. Recognizing the irony of a German skating to the music, Katarina wanted to illustrate in her interpretation of the music through movement that German people are different today but we must never forget what happened during The Holocaust. In the program, Katarina plays the role of the girl in the red coat as if she had grown up and lived and the stark and emotional choreography is representative of the girl's past and home. The program is touching beyond words and Katarina's obvious passion for peace is evident not only in this piece, but her programs to "Where To Have All The Flowers Gone?", "Sister's Keeper" and "Angel"... and after all, isn't peace and love the most important message at all any of us can share?


People were shocked when Katarina decided to join fellow Olympic Gold Medallists such as Jayne Torvill and Christopher Dean, Ekaterina Gordeeva and Sergei Grinkov and Brian Boitano when the International Skating Union allowed reinstatement of professionals in time for the 1993/1994 season and Lillehammer Olympics. After all, the diva and darling of ladies figure skating had not only won once but twice. Although she didn't have the technical difficulty to compete with the ladies field six years after retiring from eligible competition, she proved she had heart, delivering a flawless and dramatic short program to "Robin Hood" and an emotionally charged free skate to "Where Have All The Flowers Gone?" dedicated the people of the war torn city of Sarajevo, where she won her first Olympic gold medal in 1984. In a 1994 interview with the New York Times' Ira Berkow, Katarina talked about her costume choice for "Robin Hood": "I wore the Robin Hood - like a man's costume - because I didn't want to be accused of seducing the judges this time... And I like the Robin Hood character. So I wore an outfit up to my neck... But I think that leaves more to the imagination. Sexier than cleavage, no?" The way people related to and cheered on Katarina and her comparatively less difficult jumps in Lillehammer is proof and parcel that the skaters who move us and who we FEEL something for are the skaters we cheer on.


I included this particular piece among the many more dramatic pieces Katarina Witt not only for contrast but to recognize its quality. "Lemon Tree" was a program Katarina skated professionally from 1996 to 1997. Set to music by Fool's Garden, it showcased Katarina's playful, flirtatious side and was peppered with nuances and fun choreography. You can't help but watch this one and smile from ear to ear!


Created by longtime choreographer Rudi Suchy in collaboration with Katarina's coach Frau Jutta Muller, The Battle Of The Carmen's and Katarina's victorious Habanera at the 1988 Calgary Games remains to this day one of the most iconic moments in Olympic figure skating history. On her website, Katarina describes her "Carmen" performance in her words: "I attempt to be seductive, coquettish, and to translate her story of love, pain and sorrow with choreography. And of course I must do this while "dying"... The bells at the beginning of my music transform me into Carmen immediately. Energetically, I jump my first combination triple toe-loop/double toe-loop, on to the triple salchow, then the double axel and another triple toe-loop. And almost without breathing. I make up for that. I spend the hard-won 30 seconds flirting with the judges, and not only with the 7 men among them, and 'posing' choreographically for the audience. That's unimaginable today! Too bad, really! Peggy Fleming and Dick Button, commentating for ABC, utilize this little "break". Peggy wants to give me a woman-to-woman compliment, and said, 'This is the moment in which Katarina attempts to draw in the audience's attention. And her theatrical...' But she doesn't get any further, as Dick finished her sentence in a somewhat brash manner, 'there's nothing theatrical about that, it's just posing.' If only they knew, that during the 'flirting break', my heart almost fell into my costume, because suddenly, I had no more strength in my legs. During the habanera, 'Love is a wild bird, which no one can tame, and it is useless to call him, if he doesn't want to come' I feel weak and tired and would prefer to stop. Hello! In front of a million spectators, I can hardly fall asleep on the ice! I realize in the run-up to the triple Rittberger, that I don't have the necessary chutzpah for that, and do a double instead. The following triple Salchow combination went so flawlessly well, I would have loved to have audibly screamed for joy. But for now I am Carmen, and can't very well let out a squeal of delight, while the jealous José is on the verge of giving me a razor sharp death blow. The last double axel is also a success, and I feel that I have given my all for Carmen. Four triple jumps securely demonstrated, every facet played out emotionally and choreographically, and yet I know-- 'lifeless' at the end, and draped across the ice- 'Oh man, nothing has been won yet, and everything is still wide open for Debi'. With a heavy heart, relieved for the most part, but still a bit anxious, I get up, and four seconds later, I'm Katarina again." In the end, despite a performance of a lifetime from Liz Manley winning the free skate in Calgary, Katarina's "Carmen" was victorious and to this day, that performance stands up as a truly epic performance - a combination of athleticism and pure theatre.

I BELONG TO ME


On Katarina's final tour during February and March of 2008, she revisited a stunningly appropriate program that she debuted in the mid 1990's and kept as part of her vast repertoire for over a decade. Pia Douwes' "I Belong To Me" from the musical "Elisabeth" is a piece of music seemingly so appropriate for the star that came from a controlled existence as part of the former Communist stronghold that was East Germany and went on to represent a unified Germany at the 1994 Winter Olympics and freedom both in life and in expression in a professional career and life in a new country, Katarina taking up residence in the U.S. during the 1990's. "I Belong To Me" shares the ever important message that we are our own people with our own opinions and voices and could not have been more of a fitting conclusion to her empowering career.

Skate Guard is a blog dedicated to preserving the rich, colourful and fascinating history of figure skating and archives hundreds of compelling features and interviews in a searchable format for readers worldwide. Though there never has been nor will there be a charge for access to these resources, you taking the time to 'like' on the blog's Facebook page at http://www.facebook.com/SkateGuard would be so very much appreciated. Already 'liking'? Consider sharing this feature for others via social media. It would make all the difference in the blog reaching a wider audience. Have a question or comment regarding anything you have read here or have a suggestion for a topic related to figure skating history you would like to see covered? I'd love to hear from you! Learn the many ways you can reach out at http://skateguard1.blogspot.ca/p/contact.html.
Posted by Skate Guard Blog at December 02, 2014
Email ThisBlogThis!Share to TwitterShare to FacebookShare to Pinterest
Newer Post Older Post Home