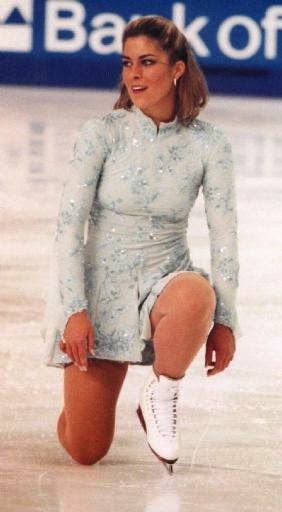 Representing the Gloucester Skating Club in Ottawa, Angela Derochie turned her grit and determination into gold when she won the 1998 Canadian senior ladies title in Hamilton, Ontario after top six finishes on her previous four attempts. With two other national medals to boot (silver in 1997 and bronze in 1999), she also represented Canada internationally at the Four Continents Championships and World Championships as well as a host of other international events in the nineties. After retiring in 1999, she turned to professional skating and is now a sought after coach in Ontario. It was my pleasure to speak with Angela in depth about her competitive career, her time spent coaching here in Nova Scotia, the triple axel jump and much more in this sensational interview:

Q: After winning the Canadian junior ladies title in 1992, you won the Canadian senior ladies gold, silver and bronze medal and represented Canada internationally on the Grand Prix circuit, at the Four Continents Championships and World Championships. Reflecting on it all now, what are your proudest moments or most special memories from that time in your life?

A: I would have to say my proudest moment after all the ups and downs with injury and consistency was to finally be able to put all the hard training together in both a short and long at the 1998 senior Nationals when I won. One of the most special moments would be doing my first Skate Canada on my birthday. After my short, the audience and Canadian team chanted "Happy Birthday!" 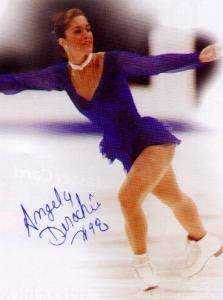 Q: My condolences for the recent loss of your coach Peter Dunfield. What made him the best coach for you and now, in your own own coaching career, what do you take from your work with him to your work with your own students?

A: Thank you. He was positive, quiet and calm. He was very picky technically in that even if you landed something it wasn't good enough because in competition you are never hoping to feel perfect. He had many great small exercises that helped make me quicker in rotation as I jumped high but didn't rotate fast. He also made sure I had more than just skating in my life. When it comes to my skaters, I monitor their emotional state. I like to make sure they are not training too much, along with being very picky technically.

Q: After the 1997 Canadian Champion Susan Humphreys was sent to that year's Olympic qualifying event (the Karl Schafer Memorial) in Vienna the previous fall injured and she failed to qualify a spot for a Canadian lady in the Nagano Olympics, how hard was it for you to win that year and miss out on that opportunity? Was competing through to the Salt Lake City Olympics something you considered at the time? 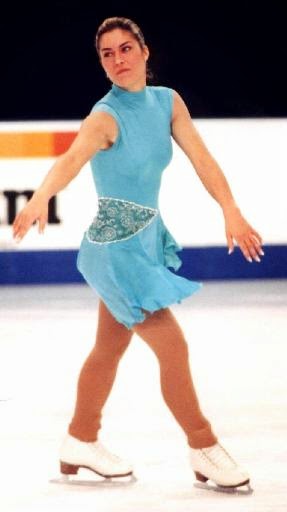 A: This was very difficult as it is every skaters dream to go not to just Worlds but Olympics. It was also a very long time between Nationals and Worlds with Olympics in between. With that being said, Peter Dunfield sent me to go to Cuba for a week to have a break from it all... the media questions about not making Olympics and how it's the first time in history that Canada had not had representation. This gave me time away from training and emotional stress before heading back to full out training. I had planned to compete until Salt Lake but at Worlds in 1998, my mother was diagnosed with multiple sclerosis (MS) so she was not able to help me as much with my skating. I was coaching skating and getting help from my aunt with my skating. In 2000, I was skating in practice better than I had ever skated but at Nationals I tried to make things happen instead of just doing it like every day. I fell to sixth and was no longer on the national team. I had lost my funding so I needed to make some hard decisions. I chose to skate on ships. When the Salt Lake City Olympics were on, I had a really hard time watching it but I made the right decision because the stress was gone and the money was coming in.

Q: You were landing a triple axel in practice near the end of your career and were even including it in your competitive programs at the time. How consistent was it and what was the feeling like when you first landed it?


A: I was landing one or two a day. They were not as consistent as they should have been to try them in competitions. It was really exciting to land the first one... and impossible to do another one in the same session. Learning it at first was a bit scary but exciting. Sometimes triple axel felt easier than triple flip and triple lutz.


Q: In your years of coaching, you spent some time working here in the Halifax area! What was your experience like coaching here in Nova Scotia and what did you love most about the area?

A: I have been coaching since 1991 and have coached many places and different levels. I loved the kids I taught in Nova Scotia. I found however that there were many roadblocks for myself and the skaters to overcome to compete against the kids from Ontario and Quebec. I liked the area and the people in the area.

Q: The "current state of skating" and the IJS judging system is always a hot topic. What is the best thing going on in skating right now and the worst?

A: The best thing is that the kids can see what the judges are giving them for each element and where they need to improve. They can see if the jumps are clean or cheated and they can see other skaters report cards to compare where they are and where they need to get to to be at the top. The worst thing is that things keep changing. The audiences really don't understand the system so we are losing some of the viewing audience.

A: Carolina Kostner. She is one of the most all around skaters I have ever seen not to mention down to earth and friendly. A great role model. She skates fast, jumps high and has great line and form. She has also had her ups and downs which shows young skaters about dedication, perseverance, hard work and the love of skating. Joannie Rochette is strong and beautiful to watch. She again shows that you can overcome adversity. Thirdly, Kurt Browning... by far one of the best performers of our sport. He is the Michael Jordan of figure skating: still skating and performing well.

A: That my favourite sport is basketball but I wasn't good at it nor was I ever tall enough to play.

Q: Do you miss performing and is that something you could ever see yourself getting involved in now?

A: Yes, there are still days I miss performing but I cannot imagine trying to get myself back in skating shape. I could possibly see myself getting involved with a production company hiring or managing... maybe something like that.

Q: What is the biggest lesson figure skating has taught you?

A: To not listen to what everyone else says and wants from you. To do what's right for you and trust in your team. With hard work and believing in yourself, anything is possible.

Skate Guard is a blog dedicated to preserving the rich, colourful and fascinating history of figure skating and archives hundreds of compelling features and interviews in a searchable format for readers worldwide. Though there never has been nor will there be a charge for access to these resources, you taking the time to 'like' on the blog's Facebook page at http://www.facebook.com/SkateGuard would be so very much appreciated. Already 'liking'? Consider sharing this feature for others via social media. It would make all the difference in the blog reaching a wider audience. Have a question or comment regarding anything you have read here or have a suggestion for a topic related to figure skating history you would like to see covered? I'd love to hear from you! Learn the many ways you can reach out at http://skateguard1.blogspot.ca/p/contact.html.
Posted by Skate Guard Blog at February 24, 2015
Email ThisBlogThis!Share to TwitterShare to FacebookShare to Pinterest
Newer Post Older Post Home