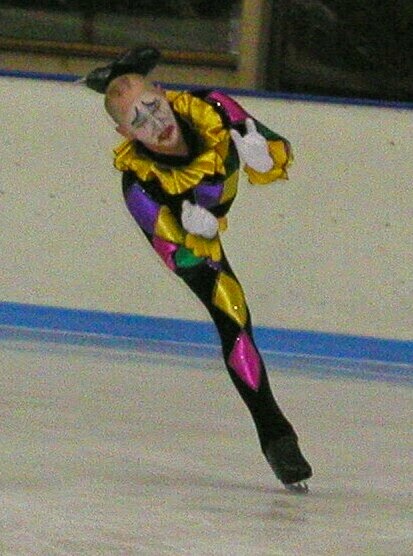 He's live many lives in skating but for three time Dutch champion Edward Vancampen, the ice has always been home. Competing as an amateur, professional and adult and coaching skating have all brought different perspectives to his love of skating. From taking pride in his accomplishments in the face of naysayers to finding the courage to return to the sport after losing his twin brother to HIV to his friendship with Robin Wagner and Sarah Hughes, Edward's story is nothing short of compelling and I am honored he took the time to share with me... and all of you.

Q: You won three Dutch titles between 1982 and 1985 and represented The Netherlands at the European and World Championships. What are your proudest moments from your "amateur" career?

A: I have a couple of proudest moments. The first was in 1983 when I passed by gold figure test on my first try. The second was when I skated the routines of my life at 1982 Europeans and finished eighteenth. My country had informed me before Europeans that they were not sending me to the 1982 Worlds, but because I placed well they changed their minds and allowed me to go. I thought... not bad for a twenty two year old who only started skating at sixteen! When I started skating, there were coaches at our rink who said to my coach, "Why are you wasting your time teaching that fuddy duddy? He's too old and will not amount to anything in skating". I was so proud to get on that plane with my coach on my way to the World Championships.

Q: How did you reach the decision to turn professional and what can you share about life on the road touring with the Ice Capades - good AND bad?

A: I quit skating for about three years. All the people, whose opinions I valued told me to stop skating, get a real job and think about my future. I worked hard and ended up as an Executive Secretary at Security Pacific National Bank in southern California. In 1988, my twin brother René, who was also a skater, was diagnosed with HIV. At that time there wasn't really anything doctors could do for him. He took massive doses of AZT and moved in with our mother so she could take care of him. He died in the summer of 1989. It was horrible watching all of this happen to him and what it was doing to my Mom. I was devastated by his death and sought out counselling. The Doctor asked me when was I the happiest. I told him "when I'm on the ice, skating". At that moment I realized that I should get back on the ice and enjoy my life. I started skating again at Laurel Plaza in North Hollywood. I skated on the same sessions as Richard Dwyer, Dorothy Hamill and Aimee Kravette. Aimee told me about a competition in Jaca, Spain, called the World Professional Skating Championships so I began training for that. I loved my time in Spain. While I was there, a skater approached me and said I should send an audition video to Willy Bietak Productions. I sent my video to them and was hired to do their park shows. I worked for them for almost nine years. I also worked with Karen Kresge doing Christmas shows for Charles Schulz, Nutcracker on Ice and Ice Capades' "Cinderella Frozen in Time". I had found my niche. I loved performing. Doing touring shows is not for everyone. The travelling schedule can be brutal. It was hard work but I loved every minute of it. I have made so many friends that I still keep in touch with. The only negative thing I can say about any show is that the dynamics of a cast can make or break your enjoyment of a tour.

Q: You have decades of experience competing professionally, in adult competition and at the Gay Games. What has kept the competitive spirit going in you for all of these years and why are competitive opportunities beyond the ISU "amateur" route important for adult and professional skaters?

A: There were not a lot of professional jobs out there for me and no opportunities to compete as a pro. I realized that my show career was coming to an end so began teaching skating. I reinstated my amateur status and starting competing again. It's in our blood. I am now fifty four and believe that I still have something to offer the sport and will always strive to be a better skater and never stop learning. I cannot imagine going through life and not being able to call myself a skater.  Plus, it keeps me young, in shape, and I'm afraid of my perky round butt falling one day.

Q: Speaking of adult skating, you've done a lot of work coaching adult skaters yourself and have worked with skaters at U.S. Figure Skating's Adult Training Camps. What are the unique challenges of working with adult skaters - both skaters coming to the sport for the first time and those returning after many years off the ice?

A: There is a definite difference in the mind set of ex-skaters coming back as adults and beginning adult skaters. Ex-skaters coming back as adults are very set in their old ways. They know what they are good at and stick with that. They are also not afraid to fall. New adult skaters are very intense. They want it so bad and seem as though they are trying to make up for lost time. There is also a definite fear factor. They know that they are older and bones break. Who will take care of them if they get injured? They alter proper technique to make it safe.

Q: You currently coach at The Ice House in New Jersey and actually spent a lot of time on the ice alongside Robin Wagner and Sarah Hughes when Sarah was training for the 2002 Olympics. Did you think at the time she'd be an Olympic Champion and how proud are you of the woman she's become today?

A: I remember the first time I met Robin and Sarah. Sarah had just won the U.S. Figure Skating junior ladies title and they were skating at our rink for the first time. She did this layback that stopped me in my tracks. I skated over and said "that's the best layback I had ever seen". Most of the time it was just the three of us on the ice training together. We became great friends. I was excited when she competed at Worlds and ended up fifth. Sarah was always a better skater at competitions. The entire rink was buzzing when they got on the Olympic team. We were just happy that they were going. Who would have thought that she had a chance to win? It wasn't supposed to be her time. It was between Michelle and Irina, but Sarah did what she needed to do and the rest is history. Sarah has a very good head on her shoulders and a very loving, close family. I am proud to know her and there isn't anything that she can't do. It has been a joy to have know her as a young girl and now as a young woman.

Q: You decided to be open about your sexuality in a sport that hasn't always loved it gays like Kathy Griffin loves us. Do you think attitudes have really evolved along with 'the real world' inside the skating community or is there a certain level of internalized homophobia going on?

A: Attitudes in skating and the public have come a long way. In the past, there were skaters who I knew to be gay but very closeted. I think they were afraid of judges, associations or their fan base treating them differently. I believe that even today some fear public opinion. They will come out when they are ready. Rudy Galindo was the first to break the ice and be embraced by everyone. I believe that U.S. Figure Skating didn't think he was marketable at the time but in San Jose when he won the national senior title, they couldn't hold him back anymore. Now you have the Johnny Weir's of the skating world doing commentary on NBC Sports. Who would have thought that who a person chooses to love doesn't matter anymore? I have never hidden my sexuality, but also have never thrown it in your face.  Maybe I'm old school, but I prefer to be known as Edward the skater, who happens to be gay and not Edward the gay skater.

A: I started skating at age sixteen and that I'm TERRIFIED of spiders!

A: Kurt Browning. He is the epitome of showman. His personality comes out when he skates and he is the type of show skater I always wanted to be. Yuka Sato. Her edges and her knees! I have always loved the way she skated but when I got the opportunity to hang out with the skaters in Stars On Ice during practice, I saw her edges and knees up close... wow! She doesn't make a sound when she skates. Matt Savoie. Matt is the complete package. He skates like a man with amazing artistic style, great arms, edges, jumps and technique. In my opinion, he has always been underrated.

A: Combining both grace and athleticism into an art form. Jumping and knowing in mid air that the jump is going to work. Performing and getting the audience to feel something... taking them on a journey.

Please be sure to check the hundreds of other skater, choreographer and expert interviews already on Skate Guard! There's also a ton of historical writing to keep you busy for a while. "Like" this blog on Facebook at http://www.facebook.com/SkateGuard for all of the new interviews and writing as they get posted, pictures and news from the skating world and lots of great videos. You can also give me a follow on the Twitter at http://twitter.com/SkateGuardBlog. I love talking skating and would love to talk skating with you!
Posted by Skate Guard Blog at February 18, 2015
Email ThisBlogThis!Share to TwitterShare to FacebookShare to Pinterest
Newer Post Older Post Home