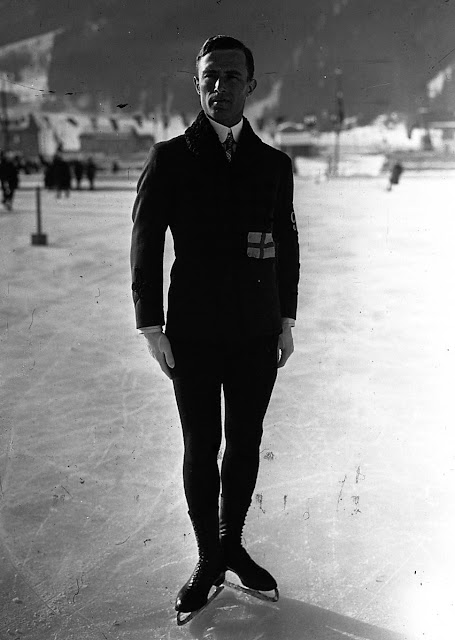 On June 7, 1893 in Stockholm, Sweden, Anna Charlotta Grafström (nee Börjesson) gave birth to Gillis Emanuel Grafström. The father was Claes August Grafström, a property owner. Young Gillis took up skating at an early age like most and was a member of the Stockholm public skating club (SASK), where he competed in his first competition at the age of fourteen. Making fast progress, he was Sweden's junior men's champion only two years later. He became a senior men's skater in 1911 and in 1912 in Gothenburg won the silver medal behind that year's European Champion Gösta Sandahl, an early success that brought a lot of due attention upon the promising young skater. An account by Olof Groth from the National Archives of Sweden states that as a young athlete he was "the most successful figure skater skating has ever known and one of the cleverest. He learned much of Ulrich Salchow, especially in the school skating but never reached his extraordinary racing mood... He was an artist and an eccentric with a sometimes exuberant boy temper... He carried himself throughout with consummate grace."

Finishing his studies at the East reallärov and KTH, Gillis made his first of only four trips to the World Championships in Helsinki in 1914, where Sandahl won his only World title. The World Championships would be cancelled for the next several years due to World War I and during that time, he was busy winning a trio of senior men's titles in Sweden and honing his craft with dedication and precision. 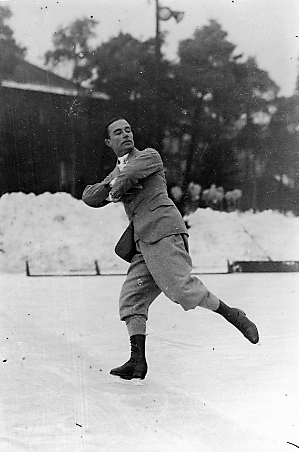 I think it is prudent to talk about why Gillis' career focus was on the Olympics and not in winning scores and scores of World titles like Salchow. Gillis made his first of four Olympic appearances at the 1920 Summer Olympics, where he decisively won the title with first place finishes in both school figures and free skating, besting ten time World Champion and 1908 Olympic Gold Medallist Ulrich Salchow in the process, whose disappointing free skating effort dropped him all the way from second in the figures to fourth place overall. One of his blades actually broke during those 1920 Games and he actually had to go shopping in downtown Antwerp for another pair, which ended up being those old fashioned skates with the curly toes.... hardly the MK Blades of today and he managed just fine! Two years later in his hometown, he would win his first of three World titles (the other two being in 1924 and 1929, both in England). In 1924, he would also win his second Olympic title (and first in the Winter Games) in Chamonix, France. During those Games, he was quite ill with influenza and actually finished second to Willy Böckl in the free skate but his strong lead in the figures gave him the advantage overall. The following year, he'd move to Germany to study architecture at the Technical University Of Berlin. His new training bases would be the Volkspark Friedrichshain and the Bornstedter See when it was frozen. Gillis had been the only Swedish figure skater to compete at the 1924 Winter Olympic Games and his participation angered the powers that be in Swedish figure skating. This caused an ongoing struggle between him and his Federation and played a major part in why he didn't compete in more World Championships. 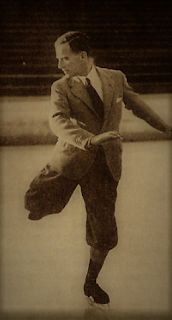 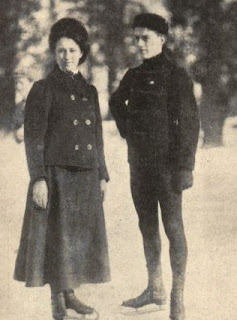 Gillis became the first and only man to win three Olympic gold medals in 1928 at the Winter Games in St. Moritz, where he managed wins in both figures and free skating despite ice conditions so poor due to unseasonably warm weather. They were so bad in fact that red markers had to be staged around the outdoor surface to mark the especially tricky parts. Less than two months after he won his third Olympic gold medal, his father sadly passed away. Perhaps pushing his luck and going for an incredible fourth go at glory in 1932, he would be handed his first and only Olympic defeat by Austria's Karl Schäfer, who himself would win two Olympic gold medals. It would really be a case of comparing apples with apples, Both skaters were by all accounts very musical and cognisant of creating complete programs with thoughtful interpretation of music. Gillis, skating one incorrect figure and a colliding with a photographer during his free skating performance, would unfortunately be his own undoing. He'd have to settle for silver in Lake Placid and it would be his last competitive performance. 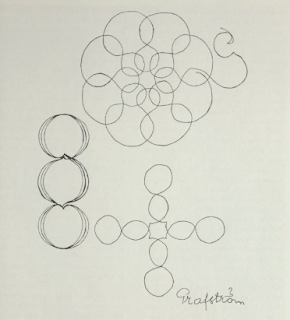 Gillis was one of the first competitive skaters of his era to recognize the importance of skating to music and crafting a nuanced, cohesive package of a program. Maribel Vinson Owen once stated that he skated "almost superhumanly to music". Groth stated "nor has anyone been dancing so easy on the ice and so rhythmically and musically smooth"; T.D. Richardson said his "personality combined the greatest knowledge of the art skating possessed by any living soul, with a rare intelligence, intense artistic feeling, perfection of technique and supreme athletic achievement." In her superb book "Artistic Impressions: Figure Skating, Masculinity, and the Limits of Sport" (which was an invaluable source in researching this particular blog), Mary Louise Adams too lauded his excellence: "His edges were sublime. His technically innovations, like the change-foot-spin, complex. Other skaters found his performances spell-binding; they were clean, subtle, and erudite. (He) was the skater's skater. There was nothing of the spectacle or the showman about him." Even John Curry felt his style was in the tradition of the Swedish sensation. 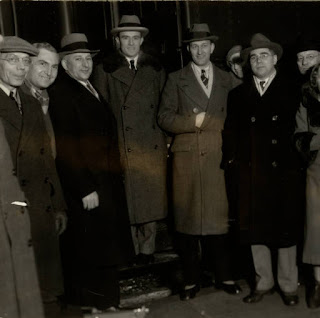 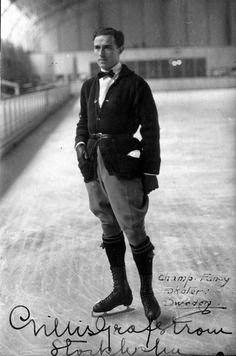 In addition to the change foot spin, Gillis also invented the flying sit spin, the forward inside spiral and the back outside edge 'Grafström-pirouette'. In addition, he was the first man to perform the double Salchow jump in the twenties. He also made the Axel jump the standard in free skating during his era. 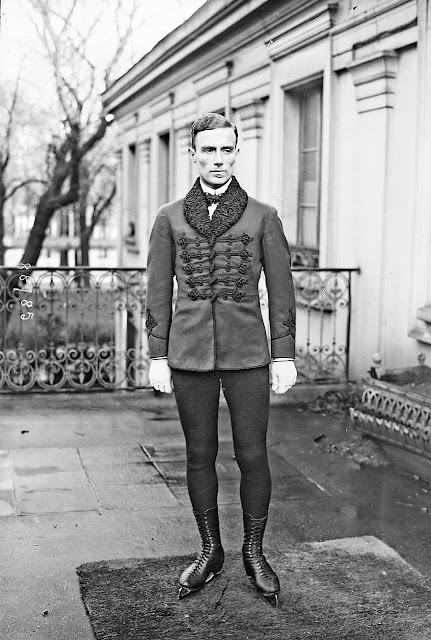 So we've got this gifted skater by all accounts who is a pioneer technically but even more so artistically, pushing the boundaries of his sport to such an extreme his contemporaries are singing his praises. Yes, that actually happened before Janet Lynn, Toller Cranston and John Curry! Who knew? But who was this guy... really? As Olof Groth touched on in the biography on file with the Swedish National Archives, Gillis was by some considered a little eccentric, a label that seems to be put on all true creative visionaries at some point in their careers, right? His studies in architecture in Berlin led to a career as a professional architect and he was also a talented poet and painter. After his competitive career ended, he even coached the first woman to do an Olympic three-peat, Sonja Henie, for a time. 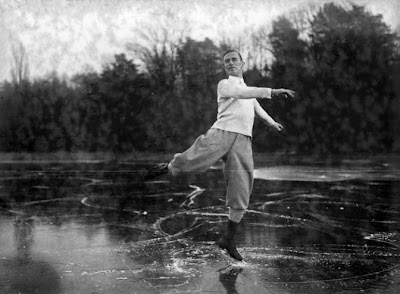 While in Germany, Gillis married Cecile Mendelssohn-Bartholdy, the great granddaughter of famous composer, pianist and organist Felix Mendelssohn. Their mutual passion for art translated to a massive collection of historical skating art. Steve Milton's book "Figure Skating's Greatest Stars" talks about this impressive collection: "He and his wife Cecile Mendelssohn-Bartholdy began their legendary collection of skating art and artifacts by touring the antique shops of Holland, where skating first became a social and artistic force. At one point, Gillis and Cecile owned the three oldest skating books in print... Much of the collection was donated by the Grafströms in parts, to the World Figure Skating Museum: the first part was donated to the Museum while at its original Boston location, while the rest went to Colorado Springs when Cecile officially helped open the Museum's new home there in 1979." The collection would go on to be called The Skating In Art Collection and before being donated to the World Figure Skating Museum would be exhibited at the Nordic Museum in 1963 and the Altonaer Museum in Hamburg in 1966. 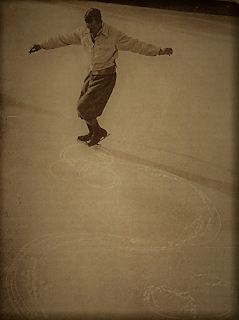 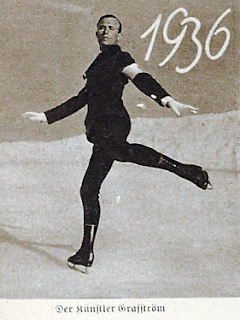 Despite the fact he seemed to face some sort of setback at every Olympics he competed in - whether it was an equipment problem, illness, bad ice or a collision with a photographer - Gillis' life was so successful it is really hard to find a lot of tragedy when you dig in and do the research. That's only until you talk about his death.

Only six years after competing in his final Olympic Games, Gillis died on April 14, 1938 in Potsdam, Germany at the incredibly young age of forty four. At the time of his death, he had been working as a coach in Munich and had been called to Berlin to coach Germany's national team. In a a 2010 article from "Potsdamer Neueste Nachrichten", his stepdaughter noted that his death was from a heart muscle inflammation, not blood poisoning which has been claimed repeatedly in modern sources. He's buried at the Bornstedtler Cemetery alongside his widow Cecile who passed away in Hamburg in 1995. Her dedication to continuing to build the collection they started together and generosity to preserving skating history in memory was simply put... beautiful. 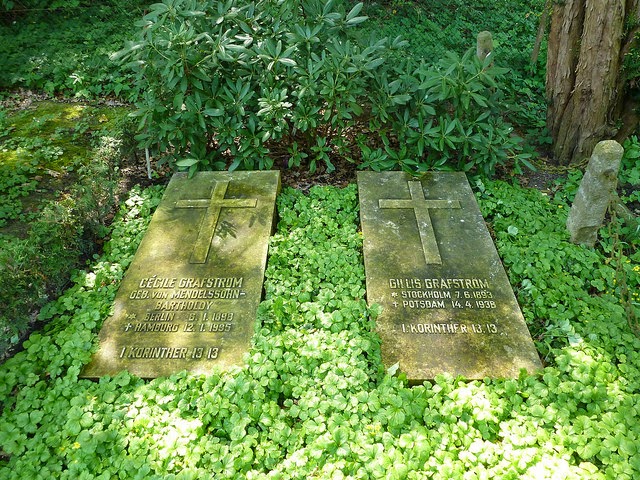 The most touching story related to Gillis came many years after his death in the form of a tribute by his widow Cecile as recounted in Mary Louise Adams' wonderful book "Artistic Impressions: Figure Skating, Masculinity, and the Limits of Sport". When John Curry won Olympic gold in 1976, Cecile joined Ulrich Salchow's widow (who gave Curry his 1908 Olympic medal) and presented him with a small gold skate engraved with a congratulatory message. According to The London "Times", Cecile sang Curry's praises saying he "turned back the clock to the unhurried, graceful, elegant days of the 20's" and that his skating reminded her of her late husband's because of his musical interpretation. Much like the Salchow's trophy that Dick Button started the tradition of passing down through generations, there's something touching about Cecile's comparison of Curry to Gillis and her tribute to his artfulness by presenting him with that golden skate. That same year, Gillis was posthumously inducted into the World Figure Skating Hall Of Fame. 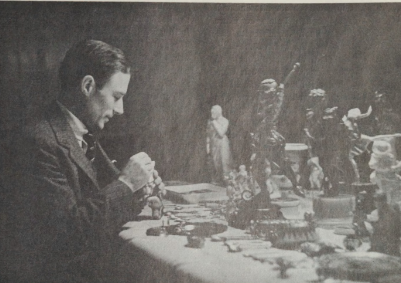 Here's the good news. Although Gillis Grafström and John Curry are so sadly no longer with us, their passion for musical interpretation and artistry lives on in those skaters that came after them... including the precious few competing today who make room for true musical interpretation in the cookie cutter competitive performances the current judging system dictates. Everything comes full circle... and our next Gillis Grafström is probably in a rink somewhere in this world today, skating precociously and with great virtuosity to the music playing on a practice session when the other skaters are busy focusing on their haircutter spins.

Skate Guard is a blog dedicated to preserving the rich, colourful and fascinating history of figure skating and archives hundreds of compelling features and interviews in a searchable format for readers worldwide. Though there never has been nor will there be a charge for access to these resources, you taking the time to 'like' on the blog's Facebook page at http://www.facebook.com/SkateGuard would be so very much appreciated. Already 'liking'? Consider sharing this feature for others via social media. It would make all the difference in the blog reaching a wider audience. Have a question or comment regarding anything you have read here or have a suggestion for a topic related to figure skating history you would like to see covered? I'd love to hear from you! Learn the many ways you can reach out at http://skateguard1.blogspot.ca/p/contact.html.
Posted by Skate Guard Blog at February 04, 2015
Email ThisBlogThis!Share to TwitterShare to FacebookShare to Pinterest
Newer Post Older Post Home