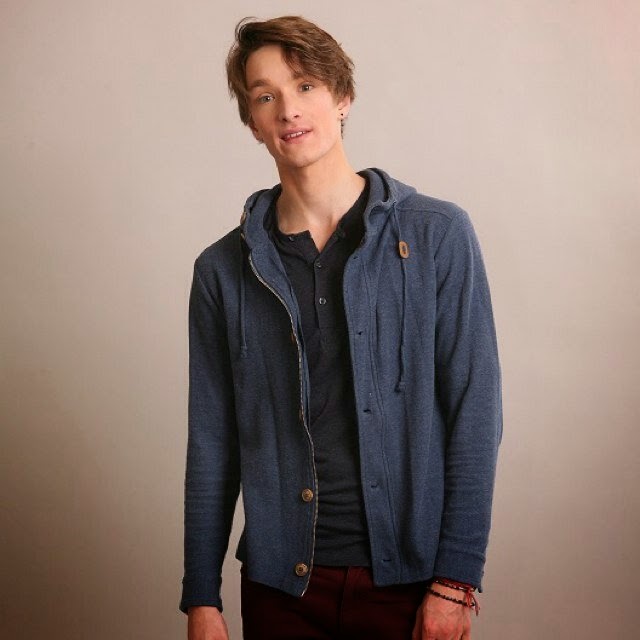 Two time Finnish junior champion and two time Finnish senior silver medallist in ice dance Jussiville Partanen has travelled the long road but is finally hitting his stride on the ice. After ending his partnership with Canada's Sara Aghai in 2013, Partanen formed a new partnership with Cecilia Törn and it's been without question a promising one. We talked about the highs and lows of his career so far, working with skating greats like Marina Zueva and Maurizio Margaglio, his goals for the future and much more in this refreshing interview:

Q: You've had success at the national level in Finland with three different partners - Laima Krasnitskaja, Sarah Aghai and of course, your current partner Cecilia Törn, with whom you won the silver medal in the senior dance competition at Finnish Nationals both this season and last. What moments in competition have been your proudest so far and which have been the most trying?

A: I have to say there have been a couple of great moments at competitions. Skating with Sara, I'd say the Junior Worlds in Minsk were definitely a highlight of our career together. The Junior Worlds in Milan on the other hand, were a definite low point that ultimately led to a hard decision to leave Canada. With Cecilia (Cessi, we call her) I'd say each competition has been a blast. The proudest moment probably was at our first Nationals together when we won the silver medal after such a short time together. 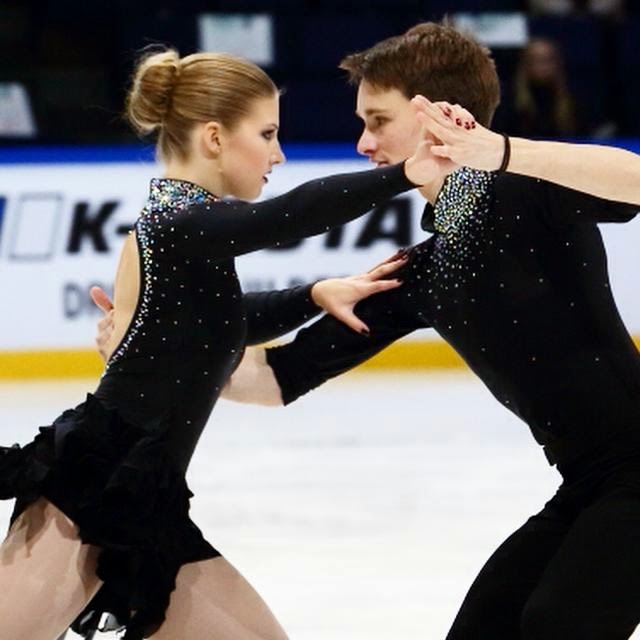 Q: Being from Helsinki and being an ice dancer, I think it's safe to say that Susanna Rahkamo and Petri Kokko are two skaters that probably had some influence on your career. Are they a team you look up to?

A: Susanna and Petri are most certainly a team that we look up to! The way they tried to always break the norm and do something different was incredible. Getting to work with them last season and getting tips on the Finnstep was definitely inspiring. It was a great moment for us. 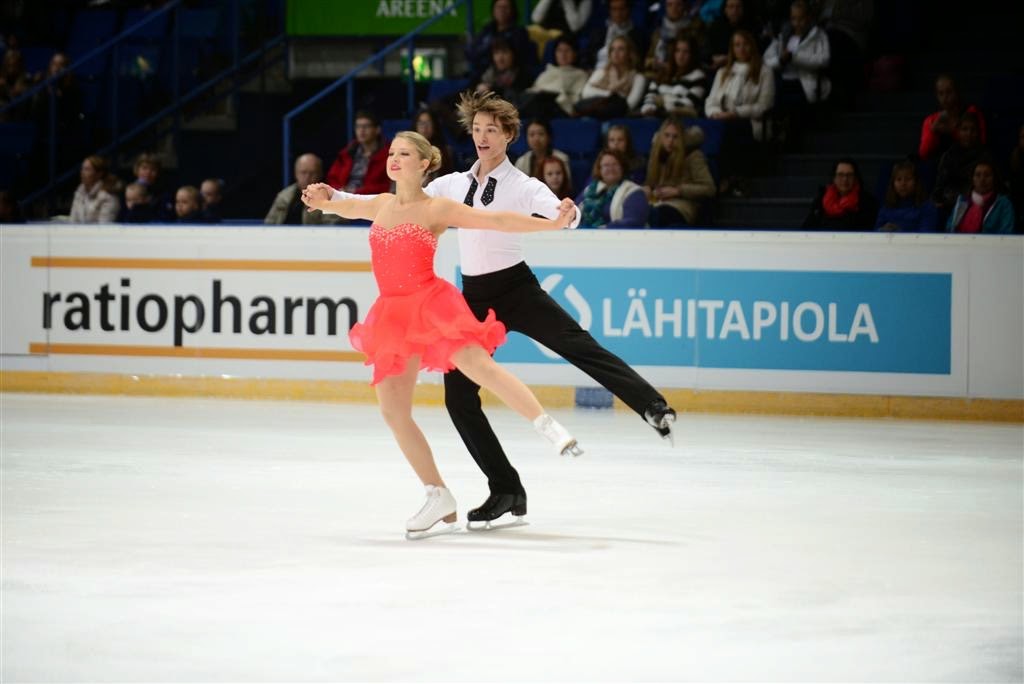 Q: Your free dance this season is set to the music of Pink Floyd. Who picked the music and the concept and how has this program challenged you most?

A: It was first suggested to us by Maurizio. I have to say I liked the idea immediately and luckily it grew on Cessi eventually too. He also came up with the concept of the program and how it should be like. Working with Massimo Scali in Detroit, we built a program around this initial concept and we have both loved it and gotten a lot of great feedback on it. The most challenging part about the program, or any other program I'd say, is for us to try and be even more like ice dancers - improving on the basics and the fluidity and smoothness of movements.

Q:  You are currently coached by World Champion Maurizio Margaglio. What is your relationship like with Maurizio and how has he brought out in the best in you and Cecilia as a team? 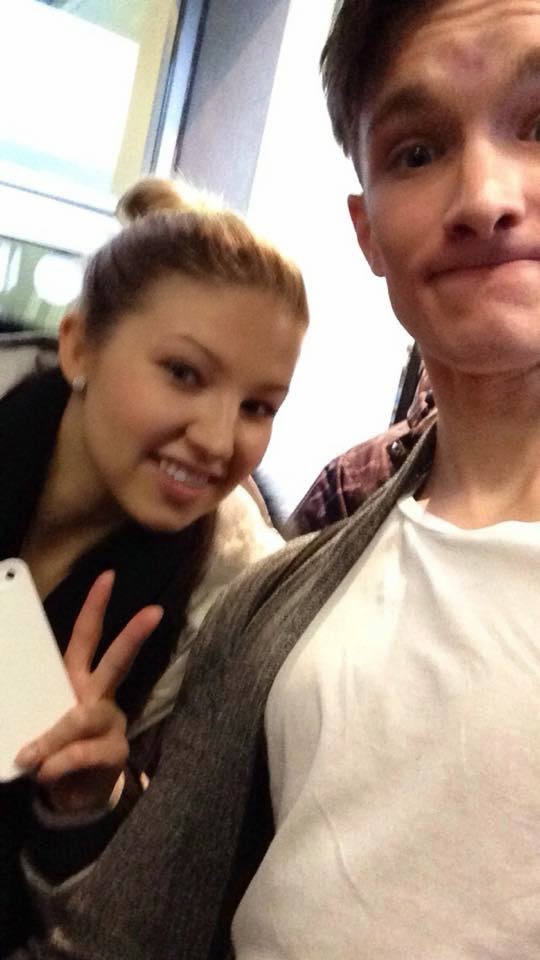 A: Working with Maurizio has been amazing. The fact that he has so much inspiration to coach and a clear idea of what he wants from us and what we need to do to achieve this is great. He listens to what we want or ideas that we might have and takes this into consideration. We have a good relationship with him. It's nice to be able to joke around with him while also maintaining the professionalism.

Q: You've also of course worked with Marina Zueva on choreography. How would you describe the process of working with Marina on a program?

A: Working with Marina has of course been quite humbling! The fact that we got to skate on the same ice with Olympians was such an honour. It's easy to see why she has had so much success. She knows what she wants from the skaters and what their strengths are and builds on that. A lot of making a program with her was throwing ideas around and then she would suddenly show us what she came up with, which was usually something very good. It's a great experience and we both definitely look up to her.


Q: If you could travel anywhere in the world you haven't visited yet, where would you go and why... and what's one place you HAVE visited you'd love to spend more time in?

A: I'd love to visit Japan as I have never been there before. Just the culture and the different atmosphere and the architecture is something I'd love to see! The place I'd like to go back to is Vancouver, for sure. After spending three years skating there, it's like a second home.

Q: What are your long term goals in the sport and what are your current focuses in training?

A: Our long term goals are to hopefully improve our rankings and make it onto the Grand Prix circuit! Also, the 2017 Worlds in Helsinki are a goal for us, and of course getting to compete at the next Olympics. We are currently just trying to improve overall - to solidify our partnership, to be able to dance closer together... Simple but important things!

Q: How would you describe your perfect day OFF the ice?

A: My perfect day off the ice would be hanging out with my family and friends and just enjoying life outside of skating. Lately, I've also started to enjoy hitting the gym, so that would probably happen at some point of the day too.

A: Tessa and Scott definitely. His way of skating is quite flawless and their partnership and spirit are great. Also, Papadakis and Cizeron. They have that something that makes one want to watch them skate. And of course, Plushenko, with his artistry and everything.

A: Most people don't know that I'm ultimately a huge dork! We do a lot of crazy and stupid things with Cessi and just like to have fun and keep the humor in everything.

A: Skating has taught me perseverance. If you want to succeed in something, you have work for it and put the time and energy needed into it.

Please be sure to check the hundreds of other skater, choreographer and expert interviews already on Skate Guard! There's also a ton of historical writing to keep you busy for a while. "Like" this blog on Facebook at http://www.facebook.com/SkateGuard for all of the new interviews and writing as they get posted, pictures and news from the skating world and lots of great videos. You can also give me a follow on the Twitter at http://twitter.com/SkateGuardBlog. I love talking skating and would love to talk skating with you!
Posted by Skate Guard Blog at March 09, 2015
Email ThisBlogThis!Share to TwitterShare to FacebookShare to Pinterest
Newer Post Older Post Home